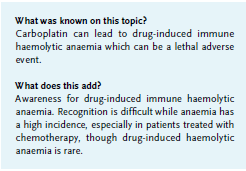 Drug-induced immune haemolytic anaemia (DIIHA) is a rare condition affecting approximately 1:1,000,000 patients. DIIHA has been reported for several antimicrobials, non-steroidal anti-inflammatory drugs and some platinum-based chemotherapy agents.1-4 While cisplatin is the most commonly reported platinum-based agent to cause DIIHA, some reports of carboplatin and oxaliplatin causing DIIHA are published.5-10 The incidence of DIIHA due to carboplatin is unknown. Anaemia is a common finding in patients treated with carboplatin and even when haemolysis is considered, it may not be recognised due to its similarity to regular auto-immune haemolytic anaemia. The discriminative test for DIIHA is the direct antiglobulin test (DAT).11 Several theories exist on the biochemical steps that lead to the formation of antibodies, but the exact pathophysiological mechanism behind DIIHA is still unclear.2 We report a case of a patient developing haemolytic anaemia after the administration of carboplatin, despite previously having numerous successful treatments with this drug, and the course of action in our patient. 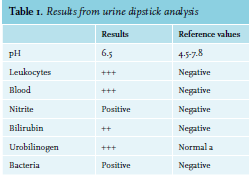 A 52-year-old woman with ovarium carcinoma was treated with neo-adjuvant chemotherapy, interval debulking, and adjuvant chemotherapy (carboplatin and paclitaxel) since 2010. In 2014, peritoneal metastases were discovered, which were treated with the same neoadjuvant, optimal debulking, and adjuvant schedule. Unfortunately, the patient relapsed in May 2016. She responded to carboplatin, gemcitabine, and bevacicumab, but relapsed again in December 2017 under bevacizumab monotherapy. She was still considered platinum-sensitive. Therefore, carboplatin was restarted. During these years, she came to the emergency room six times, all because of infections. Four of those emergency visits resulted in admission. When home after the 21st cycle, she experienced a fever and tingling sensation in all extremities and returned to the emergency room. In addition to her complaints, she mentioned a red discoloration of her urine without dysuria. Upon clinical examination, a visible tremor in all limbs was noticed and she was subfebrile. Results from urinalyis and laboratory test results are shown in tables 1 and 2, respectively. Based on these acute changes in lactate dehydrogenase and bilirubin, immeasurably low haptoglobin, and the presentation of symptoms almost directly after administration of carboplatin, drug-induced immune haemolytic anaemia (DIIHA) was suspected, but an autoimmune haemolytic anaemia and co-occurrence with a urinary tract infection could not be ruled out. Therefore, immediate treatment with antibiotics and high dose of prednisone (one milligram per kilogram body weight) was started. Carboplatin was not administered again. The tremor, tingling sensation and discoloration of the urine disappeared within a few days and the prednisone dose was tapered. Moreover, lactate dehydrogenase and haptoglobin slowly returned to normal during the following months (see table 3). The DAT turned out positive (IgG 4+, complement negative), confirming the diagnosis. Further diagnostic tests were run, including fragmentocytes, fibrinogen, blood coagulation tests, and parvovirus, all of which were negative, supporting the diagnosis DIIHA. For complete determination, blood was sent to the national reference laboratory to test for in vitro drug-dependent reactions. Unfortunately, no tests were performed as the laboratory considered this too high-risk due to the involvement of chemotherapy. While we were investigating whether the test could be performed abroad, our patient died due to pulmonary embolism and tumor progression, confirmed by autopsy. 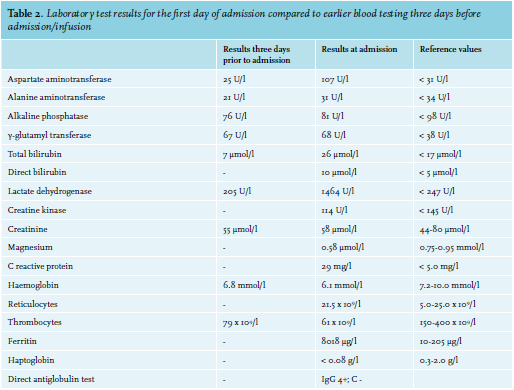 DIIHA is a rare and life-threatening condition that can occur after administration of platinum-based chemotherapy.2 While cisplatin is the most commonly reported platinum-based agent to cause DIIHA, reports of carboplatin and oxaliplatin causing DIIHA also exists.5-10 More than half of these cases had lethal outcomes. It should be noted that DIIHA is often not recognized as the cause of anaemia, because platinum-based chemotherapy leads often to anaemia.12
Little is known about the development of DIIHA or the most optimal treatment. It is hypothesized that drugs interacting and loosely binding with red blood cells (RBCs) activate the immune system and lead to the formation of anti-drug immune complexes, leading to haemolytic anaemia. The initial treatment in this case is to stop the causative agent as soon as the DIIHA is recognized. Steroids or intravenous immunoglobulins are not recommended for drug-dependent DIIHA. There are also drug-independent antibodies that will react in vitro without the drug present. Garratty and Petz suggested a modification of the membrane, creating an epitope, which allows RBCs to bind the antibody without formation of the drug-RBC complex.13 Moreover, sometimes non-immunological proteins (e.g. albumin) can bind due to the modification, and lead to prolonged increased haemolysis. Drug-independent DIIHA can benefit from treatment with steroids given the similarities to auto-immune haemolytic anaemia and has been shown to occur in carboplatin.2,11,14 There is no clear consensus on the treatment of DIIHA caused by carboplatin or any other platinum-based agents. Most important is stopping the agent inducing the haemolysis. Whether or not to add a high dose of prednisone cannot be decided during the initial days, because it is too early for information on drug-dependency at presentation. Because our patient was seriously ill and the diagnosis of auto-immune haemolytic anaemia was also considered, we had no choice and treated her with prednisone. Recently an in vitro study was published showing that carboplatin-loaded nanoparticles using biodegradable polymer poly (ε-caprolactone) (PCL) enhanced the cellular uptake of carboplatin.15 Normally larger doses of carboplatin need to be administered to achieve therapeutic levels due to poor cellular uptake of carboplatin, which causes harmful side effects including haemolysis. Carboplatin delivery as PCL nanoparticles was able to avoid every sign of haemolysis. These results suggest that carboplatin delivered in the form of PCL nanoparticles are biocompatible and a safer way to treat cancer compared to free carboplatin, avoiding carboplatininduced DIIHA cases.15 However, the clinical relevance of this PCL is limited because DIIHA is rare; however, carboplatin is widely used for the treatment of many types of malignancy. To conclude, in this case report, we want to create awareness of DIIHA and make it recognizable as a serious and lethal adverse event. Terminating drug administration is obviously the first step of treatment. While some patients were treated with prednisone, a standard plan of action remains unclear as it could depend partly on drug-independent antibodies. New improvements of carboplatin administration (such as the PCL-enhanced administration) could be an alternative for patients with a carboplatin-sensitive tumour, but in whom carboplatin leads to DIIHA. However, more research is needed before this can be safely implemented into clinical practice.