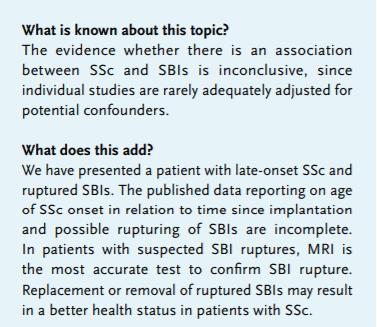 The aetiology of systemic sclerosis (SSc) is unknown, but interactions between environmental factors, including silicone and silica, and epigenetic features are reported to be important.1 At present, although many studies have been performed concerning this relationship it is still a matter of discussion whether the association between SSc and silicone breast implants (SBIs) is causal. The interest in this association started in 1964 and 290 case reports had been published by 1998.2 However, epidemiological findings concerning this relationship are controversial.3 Individual studies suggested an increased relative risk,4,5 but meta-analyses only found an increased occurrence of rheumatoid arthritis and Sjogren’s syndrome in patients with SBIs, but no increased risk of development of SSc.3,6-8
Importantly, however, most studies were too small and the duration of observation too short, so no firm conclusions can be drawn as to whether an association between SSc and SBIs exists. In a recent systemic review 11 studies that examined SSc were analysed.3 The authors concluded that the evidence remains inconclusive about any association between SSc and SBIs, since studies were rarely adequately adjusted for potential confounders.
Occurrence of SSc beyond 75 years of age is rare and called late-onset SSc.9 The clinical course of late-onset SSc differs as compared with the clinical course in younger patients. Late-onset SSc patients more frequently present with limited cutaneous SSc (LcSSc), more often have anti-centromere antibodies (ACA) and pulmonary arterial hypertension and less often digital ulcers.9 Late-onset SSc is associated with progressive disease and higher mortality. We observed a patient with late-onset SSc and SBIs.
The aim of our study was to describe a case of late-onset SSc in a female with ruptured SBIs and to provide a review of the literature concerning SBIs and SSc and in particular late-onset SSc.

Selection of studies
We carried out a PubMed search of the English language literature from 1999 to 2016. The literature before 1999 (historical studies) was considered as having been thoroughly reviewed.6,10 In addition, we obtained the results of studies cited in meta-analyses3,5-7,11 and other reviews.2,10,12-15 Studies concerning SBIs and connective tissue diseases (CTDs) were selected if patients with SSc were evaluated as a separate entity.

Literature review
A review of the literature revealed six published studies, comprising four cohort studies, two case series and two case reports.2,14,16-21 The relevant patient characteristics of these studies and previously performed studies are summarised in table 1. The studies mainly included Caucasian females with LcSSc. The mean age of SSc onset ranged from 35 to 83 years (current case); however, age of onset was not reported in most studies. Only one case report included a case with late-onset SSc. Levy et al. reported a case of a 79-year-old female patient with SSc and ruptured SBIs.2
Concerning the association of SSc and SBIs, two studies calculated relative risks, adjusted for age. Both studies performed a nested case-control study within a large cohort of females who underwent plastic surgery. Kjoller et al. performed a case-control study within a large Danish cohort and did not find an association between CTDs and SBIs, nor between SSc and SBIs (RR 3.6, 95% CI 0.3-49.7).17 Englert et al. also did not find an association between SSc and SBIs (RR 1.5, 95% CI 0.09-23.96).16 However, due to small sample sizes, the confidence intervals are large.
The prevalence of ruptured SBIs was not mentioned in most studies. Only five studies reported whether the SBIs were ruptured,2,13,18,22,23 and rupturing of the SBIs occurred with a prevalence of 9-50% in SSc patients with SBIs. No studies are available concerning the follow-up of SSc patients after removal of the ruptured SBIs. The time between implantation and development of SSc was mentioned in six studies.2,4,19,22,24,25 Mean time since implant in patients with SSc ranged from 4 months to 12.8 (SD 8.9) years. 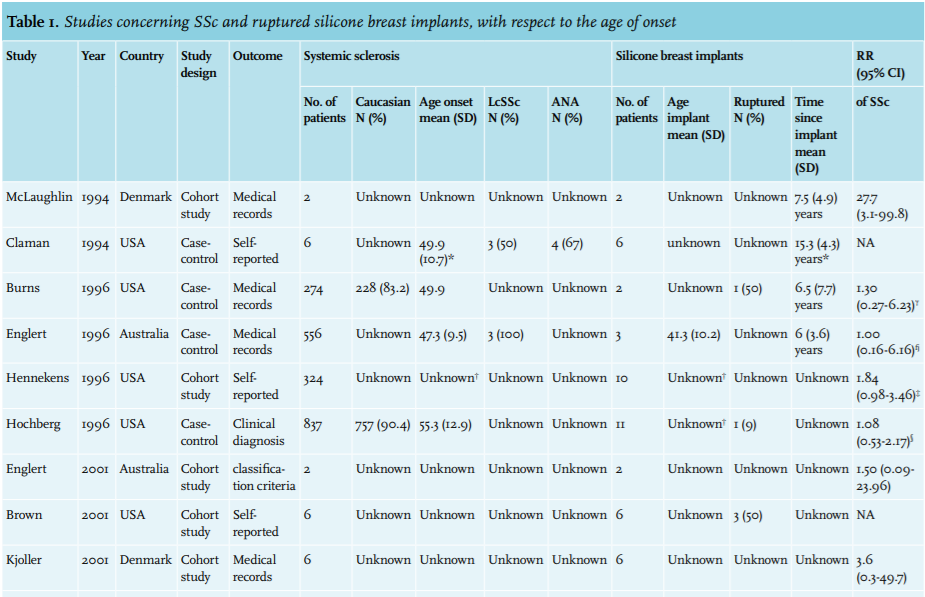 CASE PRESENTATION
In 2010, a 83-year-old female was referred to the gastro - enterologist with abdominal complaints and disturbed defecation. Endoscopic examination did not show any abnormalities, but the gastroenterologist noticed typical clinical features of SSc and referred the patient to one of us [K.H.]. During clinical evaluation it was noticed that she had Raynaud’s phenomenon, which had been present since 2006, telangiectasia, puffy fingers, sclerodactyly (figure 1), scleroderma of the face, microstomia (figure 2) and arthralgia. Antinuclear antibody (fine speckled pattern) and anti-ENA were positive, while auto-antibodies against SS-A (anti-RO60), ACA and anti-Scl-70 (anti-topoisomerase) were negative. Sicca complaints were absent, but she used eye drops twice a day because of a previous cornea transplantation as indicated for bilateral corneal degeneration based on Fuchs endothelial corneal dystrophy.
The diagnosis LcSSc was made based on Raynaud’s phenomenon, limited skin involvement, positive auto-antibodies, and a late SSc pattern on nailfold videocapillaroscopy (NVC) (figure 3). Furthermore, she fulfilled the ACR/EULAR criteria26 based on the presence of sclerodactyly (score 4), telangiectasia (score 2), abnormal NVC pattern (score 2) and Raynaud’s phenomenon (score 3).
Treatment with nonsteroidal anti-inflammatory drugs and low-dose prednisone was started.
In 2012, during a regular visit to the hospital, the patient said that she had followed a discussion on national television about SBIs and a possible association with SSc. She wondered if in her case an association could be present since she had had SBIs implanted at the age of 40 for cosmetic reasons. A mammography was performed and showed a ruptured SBI on the left side, whereas the SBI on the right side was still intact. Both SBIs were removed by a plastic surgeon. Afterwards regular follow-up was continued by her referring and treating internist.
Three years after ablation of the SBIs, the patient was doing very well, with stable disease and no cardiopulmonary involvement. In January 2016, however, she died due to old age at 89 years; an autopsy was not performed. 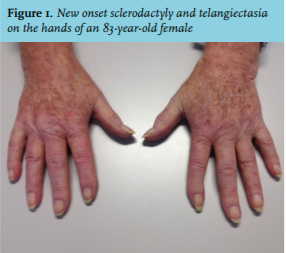 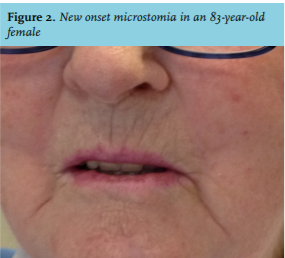 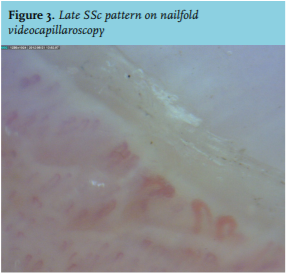 DISCUSSION
We describe a patient with late-onset SSc and ruptured SBI. A literature search was performed concerning age of onset of SSc and time since implant in patients with SSc and SBIs (table 1).
Based on case reports a causal relation between the occurrence of SSc and SBIs is suspected. A causal relation between either polyarthritis or lupus and silicone implants has been suggested in animal models.27,28 However, such studies are lacking for SSc. Furthermore, cohort studies on this topic could not demonstrate a significant association.16,17 Also meta-analyses did not demonstrate a significant association.3,6-8,11 The role of ruptured SBIs could not, however, be established in these meta-analyses since the individual studies did not provide adequate data on rupture or leakage of implants.6 Furthermore, critical remarks can be made on the quality of these studies, e.g., the lack of quality and power to demonstrate an association. In addition, most studies used the number of self-reported SSc as outcome parameter, without using any classification criteria. In our case, the diagnosis of SSc was clinically confirmed and the patient fulfilled the ACR/ EULAR 2013 criteria.26
Importantly, we have additionally collected data from all SSc patients included in the Leiden Systemic Sclerosis Cohort, which is a prospective cohort study in patients with SSc who participate in an annual two-day multidisciplinary healthcare program aiming to structure screening for organ involvement and to provide multidisciplinary care for patients with SSc.29 Patients were included if they had a diagnosis of SSc according to either the American Rheumatism Association,30 the LeRoy criteria,31 or the ACR/EULAR 2013 classification criteria.26 Between April 2009 and January 2014, 278 females were referred, including nine with SBIs, mean age 57 (ranged 22-69) years. In eight patients the SBIs were placed before the development of SSc; the time since SBIs and development was a mean of 16 (ranged 1-40) years. We consider a prevalence of 3% (8 out of 278 female patients) as a high frequency.
Rupture is a well-known complication of SBIs. It is known that the risk of implant rupture increases with implant age.32 Whereas in the past about 50% of SBIs were ruptured after a mean follow-up of 10 years,33 in 2002 about 15% of the modern implants rupture between the third and tenth year after implantation.34 The prevalence of rupture among the controversial Poly Implant Prothèse, however, was higher than that of other SBIs suggesting that SBI products are not completely comparable.35 The data reported on age of SSc onset in relation to time since implantation and possible rupturing of SBIs are incomplete. This could be important since rupture increases silicone exposure to the body. Leakage of silicones i.e. so-called ‘bleeding’ through intact implants, however, also occurs and may also result in the development in symptomatic disease.36
Several case reports describing SBI rupture from compression during a mammogram have been described.33-35,37-44 Brown et al. collected data on adverse events reported to the Food and Drug Administration (FDA) concerning mammography and found 41 cases that experienced rupture during mammography.33 It is likely that in women who had intracapsular ruptures before their mammogram, compression during mammography results in breaking of the fibrous capsule around the implant. Therefore, if a rupture is expected, magnetic resonance imaging seems to be the most accurate method for identification of the SBI rupture.12 Also the FDA advises follow-up MRIs in patients with SBIs. Our patient did very well after removal of the SBIs. Her disease did not progress and the patient felt well.
Few reports are available concerning the follow-up of SSc patients after removal of SBIs.45 In a recent review, it was found that removal of SBIs in symptomatic patients resulted in an improvement of 76% (457 of 603 patients).46 In patients with SBIs and autoimmune diseases, however, improvement occurred in only 16% of the patients. Therefore, it is still unknown if replacement or removal of ruptured SBIs leads to a better health status in patients with SSc.15 The current advice is to remove damaged SBIs, regardless of whether a leakage or rupture is present.46 However, more studies on this subject are needed.
In summary, ruptured SBIs are reported in a low number of published SSc cases. It is still unclear whether an association between SSc and ruptured SBIs is present since epidemiological studies are inconclusive. Here, we present a case of a patient with late-onset SSc and ruptured SBIs. The advanced age of our patient and the absence of disease progression after removal of the SBIs raised the suspicion of a possible association. More research is warranted to clarify the putative relation between SBIs and late-onset SSc and the follow-up of the disease status within SSc females after removal of ruptured SBIs.

We would like to thank our colleague M.D. van Haastert, gastroenterologist, in the Martini Hospital Groningen, the Netherlands, for referral of the patient.