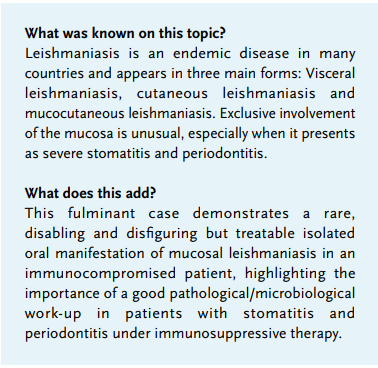 Mucosal leishmaniasis (ML) is a chronic infection that affects the upper respiratory tract or oral mucosa and is caused by the protozoan parasites of the genus Leishmania. Leishmaniasis is found worldwide and is considered to be endemic in approximately 90 countries. It has an estimated prevalence of 12 million infected individuals worldwide, with a global incidence of 1.5-2 million new cases per year. Leishmaniasis is responsible for approximately 80,000 deaths yearly.1 There are three main clinical forms of leishmaniasis: visceral leishmaniasis (VL), cutaneous leishmaniasis (CL) and ML. Exclusive involvement of the mucosa is not a novelty,2 but a fulminant course, as described here, with severe stomatitis and periodontitis, is noteworthy in our opinion.

The dentist referred a 40-year-old male because of severe stomatitis (figure 1). Inflammatory symptoms had been present for several months, in the absence of fever. His medical history included rheumatoid arthritis for which he used prednisone and methotrexate. The patient originated from Morocco, which he had visited seven months prior to his initial presentation and on several occasions earlier, but he had been living continuously in the Netherlands for most of his life. On physical examination, no signs of abdominal pain were present, and abdominal ultrasound yielded no hepatosplenomegaly.
Except for CRP (10 mg/l) and a leucocytosis (13.9 x 109/l) with neutrophilia (11.0 x 109//l), full blood count and biochemistry were inconspicuous. HIV, hepatitis B/C, Epstein-Barr virus and cytomegalovirus serology were negative.
We considered a diagnosis of severe periodontitis and stomatitis combined with superficial candidiasis. Anti-fungal therapy was prescribed in combination with oral hygienist treatment, but due to the lack of clinical improvement, eventually all his maxillary teeth had to be removed. On day 7, there were no signs of early healing; instead, the clinical manifestation had worsened. A palatal biopsy was taken, which was indicative of leishmaniasis in view of a deep penetrating ulcerative process. The inflammatory infiltrate consisted mainly of lymphocytes and histiocytes and showed focal small granulomas; numerous histiocytes contained large numbers of intracytoplasmic bodies suggestive of Leishmania spp. amastigotes (figure 2). Parasitological diagnosis by microscopy of a direct smear of a biopsy showed numerous Leishmania parasites, and mini-exon repeat PCR according to Marfurt et al. was positive.3 Culture was negative, while serological testing by RK39 and DAT tests proved positive. Sequence analysis of the mini-exon repeat PCR product indicated that the parasites belonged to the L. donovani complex. Therefore, a PCR and sequence analysis for the cpb gene was performed, according to Hide et al., showing Leishmania infantum to be the causative species.4
The patient was admitted and treated with intravenous liposomal amphotericin B (3 mg/kg every 24 hours for 10 days). Methotrexate was temporarily stopped. Within 14 days, the palate showed significant improvement and returned to normal within four weeks. A biopsy after three months showed no presence of Leishmania spp. amastigotes; the PCR was also negative. Without his former therapy, his rheumatoid arthritis exacerbated. Therefore, methotrexate was re-introduced after the PCR from the last biopsy was negative. The patient was rehabilitated with a full dental prosthesis, and he has been followed up for two years with no signs of recurrence. 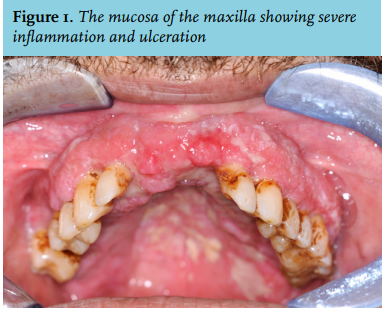 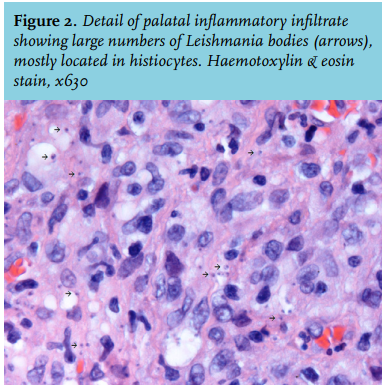 This case highlights the diagnostic difficulties in patients with exclusively mucosal lesions at an atypical location. Based upon the clinical manifestation, this patient is to be considered as having suffered from ML. It is most often caused by parasites of the Viannia subgenus and is considered to be a haematogenous or lymphatic dissemination of amastigotes from a CL lesion to the naso-oropharyngeal mucosa.5 However, the patient described above did not have a previous or concomitant episode of cutaneous leishmaniasis. ML is mostly caused by reactivation of the disease months or even years after onset of a primary CL, although in some cases there is no history of a cutaneous lesion. Less than 5% of patients suffering from the cutaneous form will develop mucosal metastatic disease.2 In the Old World, ML can be diagnosed as a sole entity or concomitantly with VL. L. infantum is known for causing VL and spreads through the mononuclear phagocyte system. This patient did not have any fever or other symptoms of VL suggestive of visceralisation. Furthermore, bacterial (super)infection occurs frequently in VL under immunosuppressive therapy,6 which could explain the severe periodontitis and stomatitis of the maxilla in this case. The absence of other clinical symptoms is exceptional. In this patient an Old World species, L. infantum, is causing solitary ML, which is unusual. The mucosal manifestation due to Old World species is not often described in patients with L. infantum.7,8 At present, liposomal amphotericin B appears to be the preferred choice of treatment, because of its short treating period and less adverse effects in comparison with, for example, stibogluconate (Pentostam).2,9
Because of the multicultural population in the Netherlands, an increasing incidence is reported, with an estimated 20-30 patients being diagnosed with CL and 5-10 patients with VL every year.10,11 Furthermore, a solitary ML is extremely rarely encountered in Western Europe. In southern Europe leishmaniasis is suggested to be a latent public health threat, because of a high prevalence of asymptomatic human carriers of L. infantum. 12 This is demonstrated by the increase of co-infections with human immunodeficiency virus and leishmaniasis, with leishmaniasis becoming the third most frequent opportunistic parasitic disease after toxoplasmosis and cryptosporidiosis.8,13 In order to facilitate a favourable patient outcome, it is important to consider isolated ML if the history of possible exposure warrants to include this rare condition in the differential diagnosis.