A 32-year-old woman was admitted after placental abruption with foetal demise at 33 weeks of pregnancy. Her medical history included two caesarean sections. She developed extensive bleeding and diffuse intravasal coagulation and was admitted to the intensive care unit for resuscitation. Due to uncontrollable bleeding, she underwent emergency laparotomy, which showed a uterine rupture. After suturing the rupture, the patient stabilised. However, in the hours following surgery, she developed oligo-anuria despite an adequate circulation. Due to persistent anuria, haemodialysis was started. Urine analysis was unremarkable. Contrast-enhanced computed tomography was performed. 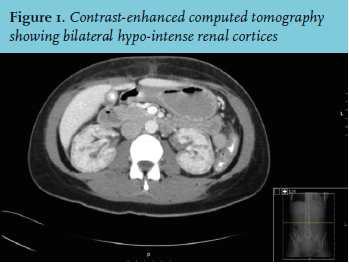