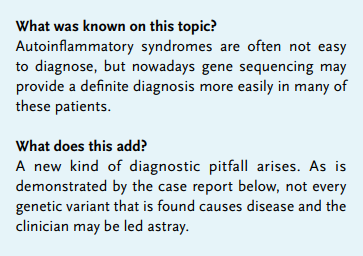 Patients with recurrent fevers with or without a skin rash pose a difficult diagnostic problem.1 Erysipelas, due to an infection with beta-haemolytic streptococci, is a very common cause of skin rash with fever. Occasionally Staphylococcus aureus and Campylobacter jejuni may cause erysipelas.2 The latter organism likely causes erysipelas in patients with immunoglobulin deficiency. As classical erysipelas is caused by the erythrogenic toxin of haemolytic streptococci and not directly by the bacterium, the diagnosis may be difficult, since the focus harbouring the bacteria may be minute and hidden. Erysipelas-like skin lesions with episodes of fever are a well-known manifestation of familial Mediterranean fever3 and of other auto-inflammatory syndromes such as cryopyrin-associated periodic syndrome (CAPS) and mevalonate kinase deficiency (also known as hyper-IgD syndrome).4 The auto-inflammatory syndromes (formerly called periodic fever syndromes) are often not easy to diagnose, but nowadays gene sequencing may provide a definite diagnosis more easily in many of these patients. However, because of advanced genetic arrays, a new kind of diagnostic pitfall arises. As is demonstrated by the case report below, not every genetic variant that is found causes disease and the clinician may be led astray.

A 35-year-old Dutch male physician was referred because of recurrent episodes of itching skin rash over the buttocks (figure 1A). This was accompanied by spiking fever (≥ 40 °C) for two days with general malaise, back pain and bilateral inguinal lymphadenopathy. Raised C-reactive protein and neutrophilia (8.04 x 109/l) were present. The attacks had occurred 3-4 times/year for the last eight years, and seemed to be provoked by stress, but no other triggers were evident. Additional blood tests revealed negative ANA, normal complement and IgG levels, no gammopathy, elevated antistreptolysin O titre (800 IU/ml) and negative anti-DNAse B. Biopsy of subcutaneous fat and skin demonstrated superficial neutrophilic dermatitis, without bacteria. Family history revealed psoriasis in his father.
Our differential diagnosis included autoinflammatory disorders, and DNA analysis revealed a missense mutation in the NLRP3 gene (Leu677Pro). Mutations in the NLRP3 gene are linked with CAPS. This particular mutation was not previously known, therefore genetic analysis of his parents was requested. Meanwhile, he was started on treatment with the recombinant interleukin 1 receptor antagonist anakinra. This seemed effective as it shortened the episodes of fever. However, after several months an episode occurred with high fever (40.2 °C) and severe skin rash that did not respond to anakinra (figure 1B). A high dose of corticosteroids was added to the anakinra. This induced some improvement of the skin lesions, but a few days later the patient developed dyspnoea, thoracic pain and fever. A chest CT angiogram showed pleural fluid, pericardial fluid, lymphadenopathy and pulmonary infiltration (figure 1C). Analysis of pleural fluid demonstrated a chylous effusion, which was negative on Gram staining and on acid fast staining, and the cultures remained sterile. Bone marrow biopsy, immunophenotyping of peripheral blood and gastroduodenoscopy were performed (after cessation of treatment), which were all normal. A PET-CT scan demonstrated enhanced uptake of fluorinated desoxyglucose in a lesion in the right kidney and a cavitating intrapulmonary lesion. Serum Aspergillus antigen was negative. Upon cessation of treatment to enable the additional investigations, the patient improved rapidly, and all symptoms disappeared.
Reassessment of the medical history raised the suspicion of recurrent erysipelas of the buttocks, just as one of us had described 20 years earlier.5 Culture of the perineum yielded group C haemolytic streptococci. The patient received eradication treatment with 10 days of clindamycin (600 mg three times a day). In the three years following, no new episodes of fever or skin lesions occurred. The DNA results from the patient’s parents showed the same mutation in his father, who did not have similar symptoms.

Our final diagnosis in the patient reported here is recurrent erysipelas, possibly caused by group C haemolytic streptococci, with deterioration following immunosuppressive treatment. He had had these recurrent episodes of fever and skin rash for eight years, which always resolved spontaneously without antibiotic treatment. This is not common but has been described before.5 Cessation of the immunosuppressive treatment (anakinra and corticosteroids) resulted in resolution of the symptoms, probably because of recovery of his immune system.
The results of the genetic array seemed to confirm our initial suspicion of an autoinflammatory disease, as did the initial positive response to anakinra. Probably, the anakinra only mitigated the systemic symptoms of the erysipelas episodes. This case demonstrates the need to remain critical, even when a definite mutation in a known disease-related gene is found. There is a growing number of case reports in the literature, in which claims are made for new genetic diseases, based on sequencing, where the diagnosis can be questioned. In the case of the hereditary autoinflammatory disorders, we recommend checking the detected genetic variants in the online INFEVERS database,6 a registry of all the known hereditary autoinflammatory disorder mutations. Genetic analysis of family members can be indicated.
In conclusion, we describe a case of recurrent erysipelas that was misdiagnosed as an autoinflammatory disorder based on genetic results. This demonstrates that 1) sometimes, erysipelas-like skin rash is real erysipelas, and 2) even in case of a genetic variant in a known disease gene, clinicians need to stay alert for the possibility of a misdiagnosis.