Type 2 diabetes mellitus (T2DM) is a major public health problem of epidemic proportions. The increasing incidence of T2DM is attributed to a global rise in obesity, growing elderly population and improved screening methods. In 2030 an estimated 66.5 million people will be diagnosed with diabetes in Europe alone.1 Identifying high-risk populations is essential for the initiation of screening and prevention in daily practice. Gestational diabetes (GD) is associated with a sevenfold increased risk for T2DM when compared with non-diabetic pregnancies.2 Furthermore, their offspring are at increased risk of developing obesity and T2DM later in life.3,4 Therefore, long-term screening is justified in this population. Without appropriate screening, T2DM often remains undiagnosed with asymptomatic progression. This is a concern, especially in young women of childbearing age, as undetected hyperglycaemia may cause early foetal loss or congenital malformations in a subsequent pregnancy.5 Evidence shows that interventions with lifestyle adjustments and diet are cost-effective and may prevent or delay the onset of diabetes.6,7 Nonetheless, 6-12 weeks postpartum screening rates are low; 20-45% of women with a GD pregnancy return for screening.8,9 Little is known about adherence to long-term yearly screening recommendations. In the Netherlands, yearly T2DM screening is recommended in the first five years after delivery.10 No data on adherence to these screening recommendations are available. The aim of this study was to investigate the T2DM screening rate and determine the long-term risk of T2DM in the five years following the GD pregnancy.

We retrospectively analysed 85 women diagnosed with GD at the Maasstad Hospital, Rotterdam, the Netherlands in 2010. GD was defined as meeting one or more of the following criteria: fasting plasma glucose ≥ 7.0 mmol/l or 2-hour plasma glucose ≥ 7.8 mmol/l (75 gram oral glucose tolerance test).11 Patient baseline characteristics were obtained from electronic medical records (tables 1 and 2). BMI (kg/m2 ) was determined in early pregnancy at the first visit to the obstetrics & gynaecology outpatient clinic. Insulin therapy was initiated when dietary and lifestyle adjustments did not result in treatment targets (fasting glucose < 5.3 mmol/l and 2 hours after meals < 6.7 mmol/l).12
In the Netherlands, primary care physicians are responsible for yearly T2DM screening in women with a history of GD. According to the Dutch College of General Practitioners, yearly screening (fasting glucose) is advocated for the five-year period directly following the GD pregnancy and every three years thereafter.10 In accordance with these recommendations, we conducted a survey in 2015 among the primary care physicians of the 2010 cohort of 85 women with GD. They were asked to answer two questions: 1) Did yearly T2DM screening (fasting glucose) take place during the five years following the GD pregnancy? 2) Was the patient diagnosed with T2DM in the five years following the GD pregnancy? Diagnosis of T2DM was defined as: fasting glucose ≥ 7.0 mmol/l on two separate days, or fasting glucose ≥ 7.0 mmol/l or a random glucose ≥ 11.0 mmol/l in combination with symptoms associated with hyperglycaemia.10 If patients had not been screened in 2015, the primary care physicians received a request to recommence T2DM screening. The percentage of T2DM in the five-year follow-up period was determined in those patients who were screened every year (2010-2015) or in those who were only screened in 2015. 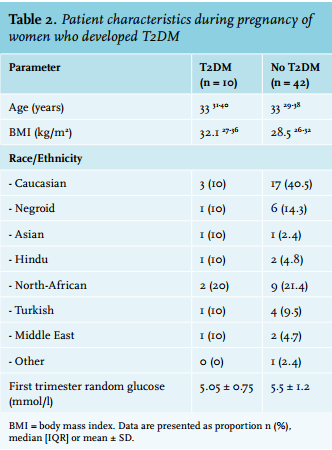 In total 85 women diagnosed with GD in 2010 were analysed. Maternal characteristics are shown in table 1. The median age was 33 years with a range from 28-37. The majority of women (76.5%) had a BMI > 25 in early pregnancy. The population is diverse in terms of ethnicity: about one-third are Caucasian, while one out of four women were of north-African descent. Insulin therapy was required in n = 39 (45.9%) of cases. Diabetes mellitus in a first-degree family member (58.8%) appeared to be a prevalent risk factor in our population. Patient characteristics during the pregnancy of the women who developed T2DM are shown in table 2. In the first four years of follow-up, 33% of the population were screened yearly. In 2015, when the primary care physicians were requested to recommence screening, the rate increased to 61.2% (n = 52). In the population of women who were screened in the five-year follow-up period, 10 (19.2%) developed T2DM and 42 did not. In the group that were not screened (n = 33), 11 women did not respond to the screening invitation and 22 moved away, or changed primary care doctors or were lost to follow-up.

To our knowledge this is the first study to investigate adherence to long-term diabetes screening recommendations in women with a history of GD in the Netherlands. Our study shows that the mandatory screening of women with GD for the development of overt T2DM is suboptimal at best. Furthermore, T2DM was a frequent complication in those who were screened. Similar low screening rates have been reported before.13 Sending a reminder to the primary care physicians seems to have a significant effect on the screening rate, suggesting that reminders could help to accomplish higher screening rates. There are a number of explanations as to why long-term screening recommendations are not met. Post-partum screening studies have shown that women fail to return for screening (20-45% attendance) shortly after delivery.9 Reported barriers for postpartum screening included: limited time and other priorities such as childcare.14,15 However, when GD women do not attend post-partum screening programs, they appear to remain out of sight of screening in the subsequent years after pregnancy.
Furthermore, the transition of care from the endocrinologist and obstetrician during pregnancy to the primary care setting after delivery remains a pitfall in accomplishing proper screening. Thirdly, conflicting screening programs on long-term follow-up frequency do exist, promoting ambivalence towards systematic screening.16-18 The American Diabetes Association recommends diabetes screening 6-12 weeks postpartum using OGTT and every 1-3 years thereafter.16 Women should be screened every three years if the results are normal; however, if impaired glucose tolerance or impaired fasting glucose is detected, screening should be done annually. The American College of Obstetrics and Gynaecology recommends screening six weeks postpartum, but does not provide recommendations after this period.17 The Dutch Obstetrics and Gynaecology Association recommends screening six weeks postpartum and yearly screening thereafter, but no statement is made about the duration of follow-up.11
Finally, recognition and awareness of GD as a risk factor for diabetes is not widespread among patients and health care providers. In a long-term follow-up study more than half of the women with a history of GD reported that they had not been informed about their risk of T2DM.18 In a survey among women 3-5 years after their GD pregnancy, less than half believed that it was ‘highly possible’ or ‘very possible’ that they would develop T2DM.19 Another survey showed that although almost all women with a history of GD were aware of the risk for diabetes, only 16% believed that they were at risk as an individual.20
Improving screening rates is important for a number of reasons. First, early detection could allow timely intervention. Additionally, considering the childbearing age of this population, it is important to aim for glycaemic control before future pregnancies. Furthermore, in women with a history of GD, compared with placebo, lifestyle intervention and metformin reduced progression to T2DM by 35% and 40%, respectively.6
Since the number of screened women was relatively small, the risk of T2DM found in our population should be interpreted with caution. Although T2DM is a frequent long-term complication in women with GD, the percentage of T2DM in our population appeared to be lower than previously reported.21 However, our estimates are in line with more recent data from a systematic review showing a risk between 9.5% and 37% (3.5-11.5 years follow-up).22
In our study, the risk of T2DM was determined in those women with a complete five-year follow-up or with T2DM screening in 2015. Theoretically, women with pre-gestational diabetes could have been included; however, since the first trimester screening showed normal random glucose levels this is less likely. The need for insulin therapy was higher in our population than previously described.23 This could be attributed to strict multidisciplinary management policy. Insulin therapy was initiated if glycaemic targets were not met on two consecutive days. Furthermore, obesity was highly prevalent in our population.24 Other limitations of this study include the retrospective design, and the fact that data on BMI before pregnancy were not available.

Potential strategies to improve surveillance
As education regarding the risk of T2DM during pregnancy will probably result in improved awareness and self-management after pregnancy, counselling women about long-term screening and raising awareness is clearly needed. Correspondence with clear screening recommendations from the gynaecologist or endocrinologist to the primary care physician is a vital step in the transfer of care. Subsequent registration of the GD diagnosis in primary care medical record systems is important for the identification of women who should be screened for T2DM after delivery. As long as GD is not classified in the international disease codes (International Classification of Primary Care – ICPC), no automatic yearly screening invitations will be generated and yearly screening will likely not be performed. This is particularly worrisome in those patients who do not initiate screening themselves. Through ICPC registration in electronic medical records, screening could be implemented on a large scale by means of automatic yearly reminders. Furthermore, uniformity in international long-term screening guidelines should be met for the implementation of systematic screening. Several types of reminding systems have been investigated. Women prefer SMS reminders according to a questionnaire in an Australian cohort. Postal and voice calls were the least preferred types.15 A systematic review investigated the effect of reminder systems for postpartum screening. Results showed that direct telephone calls strengthened the reminding effect on the women. Surprisingly, reminding both the primary care physician as well as the patient has not proven to be effective.25 A recent study showed that introducing a regional central coordinator to remind women both in writing and verbally improved post-partum screening rates to 75%.26 Furthermore, identifying those women who are at greatest risk of developing diabetes postpartum would allow better individual education during pregnancy. Maternal age, obesity, insulin therapy, highest fasting glucose level (4th quartile vs. 1st quartile range), severity of glucose intolerance and a previous GD pregnancy have been reported to be predictive factors for the development of T2DM.27,28
In summary, current screening recommendations appear to be largely unsuccessful, leading to missed diagnoses of T2DM in women of childbearing age. T2DM is a frequent long-term complication in those women who were screened. Optimising awareness amongst health care professionals of GD as a risk factor for T2DM is warranted and strategies such as systematic reminder systems are necessary to improve surveillance.