Brain lesions in a patient with rectal cancer: mind your step

Toxoplasma gondii is a parasitic infection that mostly causes symptomatic disease in immunocompromised individuals including those with HIV/AIDS, cancer, and transplant recipients. The seroprevalence of antibodies to T. gondii varies substantially among different geographic locales, ranging from approximately 11% in the United States to more than 80% in certain European, Latin American, and African countries.1 Symptomatic disease in immunosuppressed individuals most often occurs as a result of reactivation of latent infection.2 Thus, the seroprevalence among immunocompromised patients generally mirrors the rate of seropositivity in the general population.3 The most common clinical presentation of toxoplasmosis in immunocompromised patients is cerebral toxoplasmosis.1 In the majority of patients with cerebral toxoplasmosis, therapy is initiated after making a presumptive diagnosis based on clinical symptoms, radiographic features, and serology. We present an immunocompromised patient with a history of recent oligometastatic rectal cancer with brain lesions, leading to a diagnostic and therapeutic challenge.

In May 2018, a 66-year-old woman was diagnosed with cT3N0 rectal cancer with synchronous oligometastatic liver disease. Treatment was initiated with curative intent and consisted of neoadjuvant chemotherapy, followed by laparoscopic abdominoperineal resection and microwave ablation of the liver metastasis. Her medical history was remarkable for end-stage renal disease, for which she received a living unrelated donor kidney transplantation in 2003 and immunosuppressive therapy. She was taking mycophenolate mofetil 750 mg twice daily and prednisone 5 mg daily at presentation.
In March 2019, a positron emission tomography computed tomography scan was performed for oncological follow up, which showed oligometastases in the lung (three lung nodules). Henceforth, stereotactic radiotherapy with curative intent was planned. Two months later, the patient presented with progressive right-sided weakness and aphasia. Physical examination on presentation revealed right-sided hemiparesis with ipsilateral hypaesthesia, gait instability, and expressive dysphasia. MRI scan of the brain showed a ring-enhancing lesion in the left thalamus (figure 1). Initially the neurologists suspected metastatic disease. However, after discussing the patient’s case in the neuro-oncology multidisciplinary team meeting and considering the full medical history, the differential diagnosis included infectious aetiology in addition to brain metastases. A lumbar puncture was performed and revealed a pleocytosis of 35 leucocytes/μl (reference: 0-5/μl) with increased protein 566 mg/l (reference: 150-450 mg/l) and glucose 7.5 mmol/l (reference: 2.2-3.9 mmol/l) levels. Cerebrospinal fluid (CSF) cytology showed no evidence of malignant cells. Serological tests demonstrated positive serum anti-toxoplasma IgM antibodies (index: > 10,000) and anti-toxoplasma IgG antibodies (titre: 44 IU/ml) with an intermediate IgG avidity. Toxoplasma gondii polymerase chain reaction (PCR) test in the CSF was positive. After six weeks, the serological tests were repeated and showed a greater than four-fold rise in IgG antibody titre (titre: 182 IU/ml), which supported an acute infection.4 A brain biopsy was considered, but eventually not performed given the risk of the procedure and the presumptive diagnosis of cerebral toxoplasmosis on clinical, radiological, and serological basis. The patient was treated with pyrimethamine 50 mg daily, sulfadiazine 1000 mg four times per day, and folic acid 15 mg daily for six weeks according to guidelines.1 Initially, there was improvement of the neurological symptoms. However, repeat MRI scan of the brain in June 2019, four weeks after initiation of therapy, showed an increase of the thalamic lesion and multiple new nodular lesions throughout the brain (figure 2). Three weeks after completing the therapy in July 2019, there was significant clinical improvement in the dysphasia and motor strength of the right leg. MRI scan showed a decrease in the thalamic and nodular lesions (figure 3). 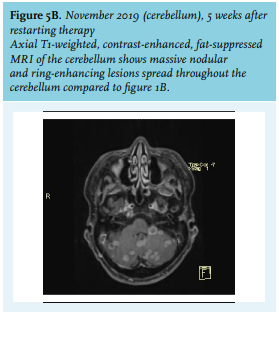 Despite the permanent immunocompromised state of the patient after completing the six-week therapy, secondary prophylaxis (chronic maintenance therapy) was not given. Approximately two months later, in September 2019, the patient returned with worsening neurological condition and increase of the nodular lesions in the brain (figure 4). It was decided to restart the treatment for cerebral toxoplasmosis for six weeks followed by lifelong secondary prophylaxis. Initially, the patient clinically improved but approximately five weeks later, in November 2019, the patient returned with worsening neurological condition. Repeat MRI scan showed further decrease of the left thalamic lesion, but multiple new lesions throughout the brain, both nodular and ring enhancing, especially in the cerebellum (figure 5). This was suggestive of a combination of cerebral toxoplasmosis and metastatic disease. The patient died shortly after. She never received secondary prophylaxis for toxoplasmosis. Figure 6 shows a timeline of the MRI scans, reflecting the clinical course of the patient as described above.

Toxoplasmosis is an infection caused by the intracellular protozoan parasite Toxoplasma gondii. In immunocompetent hosts, the infection is usually asymptomatic. In immunocompromised patients though, the infection can be potentially fatal.5 Here, we present a renal transplant patient on immunosuppressive therapy with symptomatic brain lesions. The patient was initially suspected of having brain metastases because of the recent history of rectal cancer, even though brain metastases from colorectal cancer are rare with an incidence ranging from 0.6 to 3.2%.6 However, given her deeply immunocompromised state, the differential diagnosis was broadened and a presumptive diagnosis of cerebral toxoplasmosis was made. The diagnosis was further supported because of the clinical and radiological response after initiating therapy for toxoplasmosis. The patient had not received any treatment for the malignancy in the meantime. It should be highlighted that in our case, the patient mistakenly had not received secondary prophylaxis after completing her initial therapy. According to guidelines, patients who have completed initial therapy should be given secondary prophylaxis until immune reconstitution occurs or indefinitely, if the patient is permanently immunocompromised.1 Our patient was permanently immunocompromised given her lifelong immunosuppressive therapy following her kidney transplantation. An MRI scan is the imaging modality of choice for cerebral toxoplasmosis, however accurate clinical diagnosis based on radiographic features can be difficult as these can overlap with lymphoma and metastatic disease.7

The distribution of lesions can help discriminate. Metastases are most often located in the cortical or subcortical regions due to haematogenous spread compared to the deep brain nuclei (basal ganglia, thalamus) lesions of toxoplasmosis. Moreover, metastases often start as smaller, solidly-enhancing lesions, before becoming ring-enhancing secondary to necrosis either from outstripping available blood supply or following treatment such as chemotherapy or irradiation.8 On the last MRI scan of our patient, the lesions in the brain showed a distribution consistent of both toxoplasmosis and metastases. The thalamic lesion had further decreased in size, while the MRI scan showed multiple new lesions throughout the brain as well. The combination of the radiological features, the clinical deterioration despite restarting treatment for cerebral toxoplasmosis, and the fact that the patient had not received any treatment or follow-up for her oligometastatic malignancy during this period were suggestive of additional brain metastases. In conclusion, this case highlights the difficulties of investigating the aetiology of brain lesions in deeply immunocompromised patients and emphasises the importance of making a broad and complete differential diagnosis taking the full medical history of the patient into consideration. Multidisciplinary team meetings are of importance in this process. Awareness of opportunistic infections may lead to more focused requests for radiologists and discussion in the multidisciplinary team.

The authors declare no conflicts of interests. No funding or financial support was received.