HLH caused by an HSV-2 infection: a case report and review of the literature 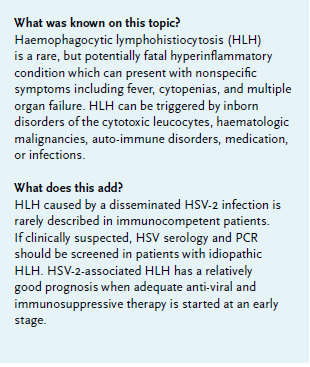 Haemophagocytic lymphohistiocytosis (HLH) is a rare, but potentially fatal hyperinflammatory condition that is often not recognised due to a lack of awareness among physicians. It can present with nonspecific symptoms including fever, cytopenias, and multiple organ failure. The diagnostic guidelines by the Histiocyte Society in 19911 are recognised, but their sensitivity and specificity were never validated.
HLH can be triggered by inborn disorders of the cytotoxic leucocytes, haematologic malignancies, auto-immune disorders, medication, or infections. Herpes viruses are associated with HLH:2 Epstein-Barr virus, cytomegalovirus, and human herpesvirus-8 infections are the most often reported triggers, in both immunocompetent and immunodeficient patients. However, herpes simplex virus type 2 (HSV-2)-related HLH is rare. Here, we present a patient with rapid progressive HLH caused by an HSV-2 primary infection.

A 63-year-old woman presented with acute fever, confusion, and progressive right upper quadrant pain. Her medical history included hypothyroidism and chronic lower back pain. She had consulted her general practitioner two days prior because of fever and dysuria, and amoxicillin/ clavulanate was started to treat a presumed urinary tract infection. An additional history revealed unsafe sexual intercourse with a new partner one week before the onset of her current symptoms. On general examination, a severely ill patient with a fever of 39 °C and genital ulcers were seen. Palpation of the right upper quadrant of the abdomen was painful without signs of peritonitis. She had no lymphadenopathy or organomegaly.
Initial blood investigations showed a mild thrombopenia (thrombocytes of 123 x 10^9/l), leucopoenia (white blood cell count of 3.7 x 10^9/l), and a non-icteric hepatitis (alanine aminotransferase (ALT) of 1628 IU/l and aspartate aminotransferase (AST) of 1566 IU/l). Cefuroxime was started to treat a sepsis of unknown origin.
A CT scan of the abdomen showed a normal aspect of the gallbladder but a wide common bile duct and multiple liver cysts, and some prominent lymph nodules around the mesenteric vessels. An endoscopic ultrasound was performed, which showed acalculous cholecystitis but no signs of biliary obstruction.
During the second day of admission, the liver enzymes and bilirubin level increased rapidly (ALT of 1830 IU/l and AST of 2581 IU/l). The presence of hyperferritinaemia (36,700 ng/ml) and progressive pancytopenia led to the suspicion of HLH that was confirmed by a bone marrow aspirate. Simultaneously, liver failure progressed and the patient was transferred to the nearest academic medical centre. There, a primary infection with HSV-2 was shown: IgM antibodies against herpes simplex virus without IgG antibodies. Additionally, a PCR assay of the EDTA plasma was strongly positive for HSV-2 but negative for herpes simplex virus type 1. A subsequent liver biopsy also showed HSV-2 infection, confirmed by immunohistochemistry, with chronic infiltration and necrosis of 40% of the liver parenchyma with focal haemophagocytosis. Treatment with intravenous high-dose acyclovir (10 mg/kg, 3 times daily), intravenous immunoglobulins and dexamethasone was started on hospital day three. The fever quickly subsided and the liver enzymes started to improve after two days (figure 1, panel A). The HSV-2 load decreased during and after hospital admission, whereby the HSV-2 DNA was still detectable after three months (figure 1, panel B). The patient showed a rapid recovery and was discharged 32 days after initial presentation. Oral valacyclovir was continued until one month after discharge. The dexamethasone was gradually tapered and was finally discontinued after 74 days of treatment. 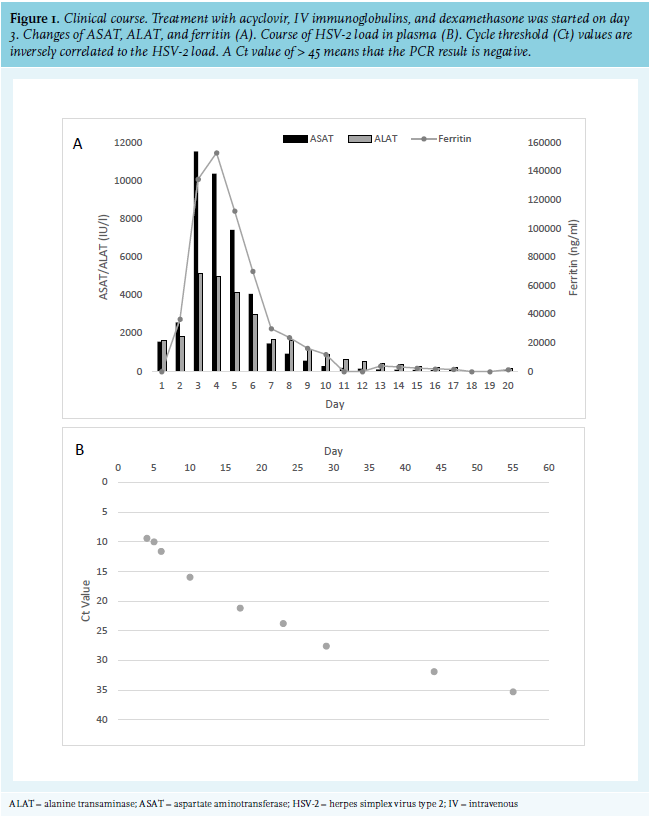 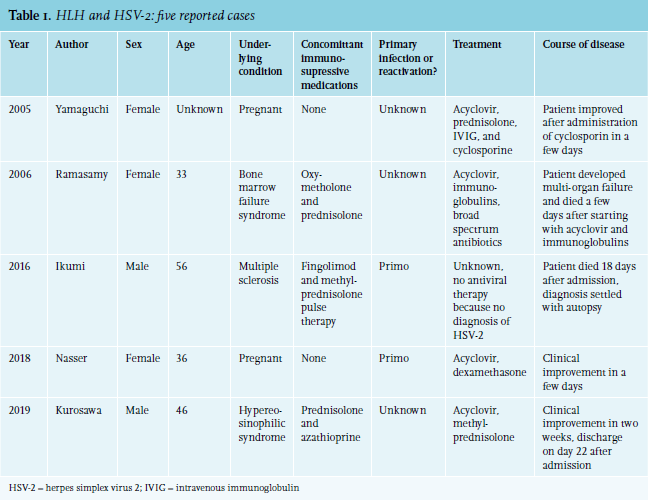 Here, we describe a patient with HLH and acute fulminant liver failure after a primary genital HSV-2 infection. HSV-2 is a common sexually transmitted disease that is usually self-limiting and asymptomatic, but can result in a more serious infection depending on the immune status of the host.3 Acute hepatitis with liver failure is a rare complication that can be seen in patients with an HSV infection, either both HSV-1 or HSV-2.4 In our case, the patient developed fulminant liver failure within three days caused by both HSV-2 and reactive haemophagocytosis. The liver enzymes improved, accompanied by a decreasing HSV-2 viral load rapidly after anti-inflammatory and anti-viral treatment. We searched the literature for cases of HSV-2-associated HLH. We used the Pubmed search engine and selected all cases that fulfilled the current HLH criteria and were written in English. There are five previously reported cases of HLH caused by a disseminated HSV-2 infection, of whom two patients had a certain primary infection (table 1).5-9 Three of the five described patients were using immunosuppressive therapies because of their underlying disease. Two cases report a pregnant woman without a relevant medical history. Pregnancy might lead to a reduced immunity to herpes viruses due to the shift of a T-helper 1 to T-helper 2-dominated cell-mediated immunity and is often associated with an exaggerated inflammatory response to viral infections.8,9 In three cases, the patients were treated with acyclovir intravenously, and cessation of immunosuppressive therapy and corticosteroids early in the course of the disease, and all three patients recovered with no reported signs of recurrence of HLH.6,8,9 In one case, the diagnosis was established relatively late, and therefore the start of adequate treatment was delayed, leading to the death of the patient.7 In the fifth case, the diagnosis of HSV-2-associated HLH was made on autopsy.5 Remarkably, our patient did not use immunosuppressive agents. Her medical history and further analysis did not reveal any signs of immunodeficiency; the patient had normal immunoglobulin levels, normal levels of CD4+ and CD8+ T cells, and no human immunodeficiency virus infection. Furthermore, whole-exome sequencing did not reveal any known mutations that are associated with HLH or immunodeficiency in general. Five months after these episodes, there is still no sign of immune deficiency. Therefore, it is presumed that reactive HLH has complicated a primary HSV-2 infection in a previously immunocompetent patient.
Treatment of adult patients with HLH is challenging because no general guidelines exist. It is recommended to treat the underlying cause together with immunosuppressive treatment in a multidisciplinary referral centre with expertise in adult HLH patients. Cautious monitoring and swift adjustment in cases of progressive signs of the HLH is warranted to achieve complete regression of the potentially fatal hyperinflammatory state.10 In cases of HLH caused by a disseminated HSV-2 infection, which is rarely described in an immunocompetent person, differentiating between HLH and primary severe HSV-induced hepatitis remains challenging. Both cytopenia and hyperferritinaemia could be caused by hepatitis due to hepatocellular damage. The differentiation is important because of treatment implications.11 Evidence of haemophagocytosis in the bone marrow and hypertriglyceridaemia may point towards HLH, although this hypothesis cannot be corroborated with clinical evidence since this has never been studied.
In conclusion, this is the first report of HSV-2-associated HLH in an immunocompetent adult patient. If clinically suspected, HSV serology and PCR should be screened in patients with idiopathic HLH. Although HLH is a severe condition with a high rate of morbidity and mortality, the prognosis of a patient with HSV-2 largely relies on the early recognition and treatment of the HSV infection. Based on previously reported cases and the case reported here, HSV-2-associated HLH could have a relatively good prognosis when adequate anti-viral and immunosuppressive therapy is started at an early stage.

All authors declare no conflicts of interest. No funding or financial support was received. Informed consent: written informed consent of the patients was obtained.