An unhealthy blush - secondary erythrocytosis due to waterpipe smoking 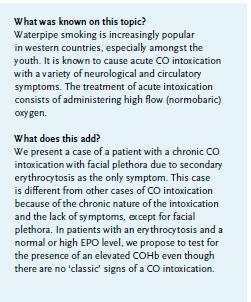 Waterpipe smoking has become increasingly popular in Western countries, especially among young people.1-3 It also poses emerging health risks like cardiovascular and respiratory disease, as well as a well-established risk of an acute CO intoxication. There are few reports on chronic use and consequences. We present an unusual case of a chronic CO intoxication due to waterpipe smoking.

Clinical presentation and clinical findings
A 22-year-old male was referred to our outpatient clinic by the dermatologist for evaluation of polycythaemia (haemoglobin 20.14 g/dl (12.5 mmol/l)). He was under treatment by a dermatologist for 18 months for an invalidating facial plethora. The plethora started four years earlier without a significant contributing factor at the beginning. His last known normal haemoglobin level was from five years prior to the first consultation.

Diagnostic assessment
Our patient had no other complaints besides the facial plethora. Physical examination showed a striking facial erythema without telangiectasia (figure 1). He was slightly overweight (body mass index of 28 kg/m2 ) but further physical examination was unremarkable. Peripheral oxygen saturation was 97%. There were no clinical findings suggesting a cardiopulmonary disease. Laboratory analysis revealed a progressive elevation of the haemoglobin level (20.8 g/dl (12.9 mmol/l)). Haematocrit was 60% and white blood count, differential, and platelet counts were normal. Further analysis yielded an erythropoietin (EPO) level of 15.9 U/l (normal 4.4-15.8 U/l). The elevated EPO with a normal oxygen saturation was suspect for a secondary erythrocytosis, and we performed analysis for benign and malignant causes of elevated EPO. There were no abnormalities on chest X-ray, and abdominal ultrasound was unremarkable; in particular, there were no signs of renal cell carcinoma. A polysomnography showed no signs of obstructive sleep apnoea syndrome. A full-body computed tomography (CT) scan showed no signs of malignancy or other abnormalities. After these investigations, there still was no definite diagnosis. Despite the fact the erythrocytosis was chronic and the patient was not dyspnoeic, we performed an arterial blood gas analysis. The methaemoglobin level was normal, but the carboxyhaemoglobin (COHb) level was elevated (21%, normal < 5%), consistent with CO poisoning. 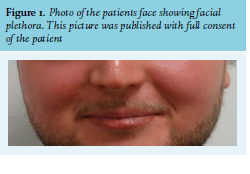 Therapeutic interventions
After diagnosing the CO poisoning, we confronted the patient with these findings. He still denied smoking cigarettes and using illicit drugs, but admitted smoking a waterpipe in a shisha lounge approximately two times per week. Despite the lack of other symptoms of a CO intoxication, we referred the patient to our emergency department for treatment with high flow oxygen therapy, which resulted in a lower COHb level of 6% within hours.

To identify the cause of the CO poisoning, we contacted the chemical, biological, radiological, and nuclear (CBRN) Tactical Advisor of the community health services to perform CO measurements at the residence of the patient. All CO values in the house were normal, even with active central heating. However, firemen found a waterpipe in the patient’s bedroom. His father reported that the patient smoked it daily. We strongly recommended that the patient cease smoking the waterpipe, and within one month, his haemoglobin level dropped to 19.2 g/dl (11.9 mmol/l) and his EPO value normalised to 4.6 U/l. This confirmed the diagnosis of a facial plethora due to a secondary erythrocytosis as a result of chronic CO intoxication due to daily use of the waterpipe. The facial plethora also diminished. 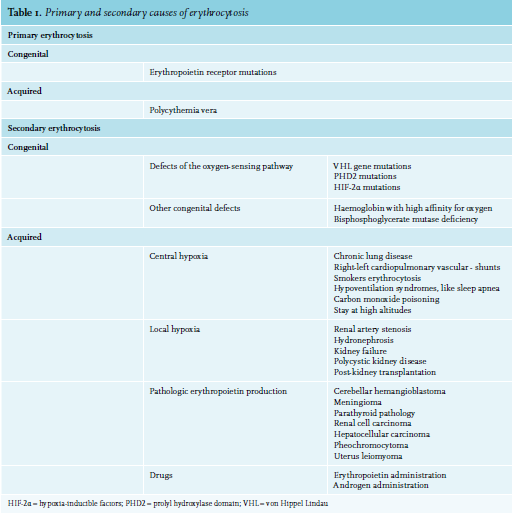 Use of a waterpipe, also known as a ‘hookah’, ’shisha’, or ‘hubble bubble’, has become increasingly popular amongst teenagers and young adults. In a study performed in the Netherlands, 6.9% of students between the ages of 12 and 16 reported use of a waterpipe in the previous month. In the adult population, there was a reported use of a waterpipe in 2.7% in the past 12 months1 This worrisome trend seems to mainly affect Western countries. According to two larger studies recently published in the United Kingdom and the United States, there has been a recent increased prevalence of waterpipe smoking compared to cigarette smoking among high school and college students.2,3
One of the main reasons for its increased popularity is the social aspect of waterpipe smoking. Furthermore, it is perceived to have fewer health risks compared to cigarette smoking, but this is a misconception. People have high expectations of the filtering function of the water compartment in the system. However, multiple reports have been published revealing serious acute CO intoxications as a result of waterpipe usage.4-6 In addition to CO intoxication, there are various short- and long-term complications due to waterpipe use. Examples are cardiovascular disease, decreased lung function, and an increased risk of malignancies. To our knowledge, secondary erythrocytosis without other symptoms of CO intoxication as a result of waterpipe usage has not been described before.

Different guidelines and reviews provide a strategy to investigate the cause of the erythrocytosis, where clinical history and examination are essential to determine further investigations and management. Particular attention should be paid to signs related to potential secondary causes of erythrocytosis like cardiopulmonary diseases, EPO producing tumours, or smoking.7-9 Tissue hypoxia is an important cause of secondary erythrocytosis. In addition to full blood count analysis, arterial oxygen saturation is an easy test to identify tissue hypoxia. An oxygen saturation (SaO2) measurement of < 92% is associated with an absolute erythrocytosis.10 However, there are situations where hypoxic erythrocytosis will exist despite a normal SaO2. Examples are high oxygen affinity haemoglobin, CO poisoning, and sleep apnoea syndrome. CO intoxication causes tissue hypoxia by replacing the oxygen molecules on haemoglobin.11
At the time of this case report, the local guidelines suggested to measure of COhb later in the diagnostic process. This recently changed, and COhb measurement is now incorporated early in the diagnostic process.

To our knowledge, this is one of the first reported cases of a relevant secondary erythrocytosis as a result of a chronic asymptomatic CO intoxication due to frequent waterpipe smoking.

In patients with a normal or high EPO level, we propose to test for the presence of an elevated COHb. The test is not expensive and may quickly reveal CO intoxication. As illustrated with this case, CO intoxication has potentially disastrous consequences, and patients with chronic CO poisoning may be virtually asymptomatic. Not all individuals consider using a waterpipe as dangerous as smoking or drugs, and therefore physicians need to specifically ask for its use during history.