Hyponatraemia, which is defined as a serum sodium concentration < 135 mmol/l, is estimated to occur in up to 30-40% of hospitalised patients.1-3 Hyponatraemia can pose a therapeutic challenge, and this condition is often accepted, despite an association with poor outcomes. The 2015 multinational Hyponatraemia Registry showed that almost half of 3087 patients with hyponatraemia were discharged from hospitals with a serum sodium level of 130 mmol/l or less.1 Patients with chronic hyponatraemia (existing > 48 hours) often appear asymptomatic, but chronic hyponatraemia has been associated with cognitive deficits, an increased risk of falling, bone fractures and osteoporosis, and an increased risk of mortality.4-10
The syndrome of inappropriate secretion of antidiuretic hormone (SIADH) is a common cause of hyponatraemia, although clear prevalence data are lacking, possibly partly due to failures in diagnostic procedures.1,2 Hyponatraemia in SIADH is the result of increased retention of water due to excess antidiuretic hormone (vasopressin), and hence fluid restriction is an effective and widely accepted first-line treatment strategy.11,12 However, in patients with a high level of antidiuretic activity, strict fluid restriction may not be sufficient or cannot be applied due to another prescribed therapy or poor patient adherence. Urea is recommended as a second-line treatment for SIADH by the 2014 European Renal Best Practice (ERBP) guideline and the 2017 Dutch Practice Guideline ’Het Acute Boekje’.11,12
In the kidney, urea plays an important role in concentrating urine and acts as an osmotic diuretic. Since the diuretic property of urea is its main pharmacokinetic mechanism, it might be possible to estimate the serum sodium level after a urea dose using a patient’s urine osmolality level and total body water (TBW).13 For example, in a patient with a urine osmolality of 750 mOsm/l, 500 mmol of urea (30 g) leads to 0.66 l of electrolyte-free water excretion. If the patient has a TBW of 20 l, the new TBW is 19.34 l. The new serum sodium value can then be calculated using the formula:

In 1980, Decaux and colleagues were the first to report the use of urea as a treatment for hyponatraemia due to SIADH.14 In the years following, they published several case series and observational studies showing that urea can be successfully used for both rapid correction of acute hyponatraemia and long-term maintenance therapy for chronic hyponatraemia.15-18 Although incorporated into the European and Dutch guidelines, experience with urea therapy for SIADH is limited in the Netherlands. In this case series, our primary aim was to present data on the effectiveness and tolerability of urea as a second-line treatment in hospitalised patients with SIADH. As secondary aim, we determined whether the serum sodium levels after a dose of urea can be accurately estimated.

This study was conducted in the Medical Centre of Leeuwarden, a 700-bed teaching hospital in the Netherlands, from December 2017 to February 2019. Formal approval was waived by the local ethical committee according to national guidelines.
In December 2017, we implemented an inpatient SIADH management protocol including urea as a second-line treatment strategy. Treating physicians from the departments of internal medicine and geriatrics were informed about the protocol and asked to report patients in need of second-line treatment to the coordinating investigator (JW). Furthermore, this investigator screened all hospitalised patients with moderate to profound hyponatraemia (serum sodium ≤ 129 mmol/l) using a notification system built into our Electronic Patient Record. In possible cases, study criteria were assessed by the coordinating investigator in collaboration with the treating physician.

Study population
Patients included in this case series were aged 18 years or older and had moderate to profound chronic hyponatraemia (serum sodium ≤ 129 mmol/l, existing for more than 48 hours) due to SIADH. A diagnosis of SIADH was made if patients met the diagnostic criteria as stated in the European guideline.11 Diagnostic procedures therefore included measurements of serum osmolality, serum glucose, urine osmolality, urine sodium, serum cortisol, serum thyroid-stimulating hormone (TSH), serum creatinine, and assessment of volume status and diuretic use by the treating physician.
Patients eligible for treatment with urea included those in whom fluid restriction was not or was minimally effective and/or in whom further restriction of fluid intake was not possible. Contra-indications for urea were moderate to severe renal impairment (chronic kidney disease stage 3b or higher) and liver failure. Patients were excluded from this case series if they received other treatment for hyponatraemia (e.g., hypertonic saline, loop diuretics combined with sodium chloride tablets), if they did not receive urea for at least two subsequent days, if they were in the intensive care unit, or if they had severe symptoms of hyponatraemia (e.g., seizures, coma) or SIADH with an expected fast-resolving cause (e.g., after discontinuation of causal medication).
The dosage of urea was determined using the guidelines’ dosage recommendation of 0.25-0.50 g/kg/day.11,12 Urea was prescribed in one dose per day or two doses when receiving 40 g/day or more. We used a urea formulation recipe known as ‘Brussels Champagne’ consisting of the following ingredients in addition to 10 g of urea: sodium bicarbonate 2 g, citric acid 1.5 g, and saccharose 200 mg. This formulation is diluted in 50-100 ml of water and can be taken orally.11,19 The previously prescribed fluid restriction was maintained in patients able to tolerate the restriction. The duration of urea therapy and continuation after discharge were determined per case, for example, by taking into account the severity and underlying cause of SIADH.

Data collection
In patient treatment
After inclusion, we documented the baseline clinical and treatment characteristics of patients. The presumed cause of SIADH was reviewed and agreed upon by the treating physician and coordinating investigator. Serum sodium concentrations were measured at admission and at the following time points in relation to the start of urea therapy: Day-2, Day-1, baseline, Day+1, Day+2, and at the end of inpatient treatment (EIT). Serum urea, creatinine, and uric acid levels were measured at baseline, Day+2 and EIT. The occurrence of side effects and overcorrection, defined as an increase in serum sodium > 8 mmol in 24 hours, were monitored. The duration of treatment and changes in urea dose were recorded. The EIT was considered to occur either at discharge or when a patient discontinued urea therapy during hospitalisation. In the case that a patient had multiple inpatient treatment episodes, only the first episode was included for this analysis.

Follow-up
If a patient was discharged with urea treatment, we asked the attending physician to perform follow-up evaluations of serum sodium levels at two and six to eight weeks after discharge. The duration of ambulatory treatment and changes in urea dose were also recorded. Restart of urea therapy during the study period was documented, both during (re)admission and ambulatory care, after reporting by the attending physician and/ or by the notification system of our Electronic Patient Record.

Endpoints
The main outcomes were normonatraemia (serum sodium 135-145 mmol/l) at EIT and discontinuation of urea due to side effects. Secondary outcomes were the number of patients experiencing side effects and overcorrection. In the analysis of serum sodium estimation, the endpoint was agreement between the estimated and measured serum sodium levels, which was defined as a maximal difference of 1 mmol/l.

Data analysis
We describe continuous variables as medians and ranges or interquartile ranges (IQRs), and the Wilcoxon signed rank test was performed to compare laboratory values before and after the start of urea treatment. P-values are two-tailed, and the significance level was set at 0.05. To analyse the agreement between the method of estimating serum sodium and the gold standard of measuring serum sodium, a Bland-Altman plot was constructed, showing differences between the estimated and measured serum sodium levels plotted against the measured serum sodium level. The mean difference and 95% limits of agreement (mean difference ± 1.96 SD of the differences) were calculated using the one-sample T-test. Based on the researchers’ opinion, the maximum allowed upper and lower limits of agreement were defined beforehand as ≤ 3 mmol/l and ≥ -3 mmol/l, respectively. We used SPSS Statistics version 25 (IBM, New York, United States) and Microsoft Office 2010 (Microsoft, Redmond, United States) to analyse and display our data.

Study population
During the study period, 18 patients were treated with urea, of whom, 13 met the inclusion criteria (figure 1). 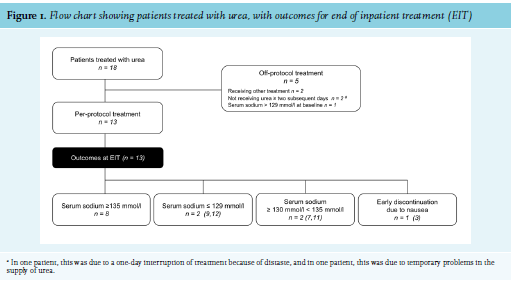 The described diagnostic procedures for the diagnosis of SIADH were completed in all patients except for patients 1 and 2, for whom serum osmolality data were missing. The clinical and treatment characteristics of our 13 patients are listed in table 1. Their median age was 70 years (range 48-90) and nine patients were female (69%). Pulmonary infection was the most common presumed cause of SIADH (n = 4), followed by cancer (n = 3). One patient with pulmonary infection and one patient with medication as identified causes of SIADH were also diagnosed with cancer. Patients with medication-induced SIADH were unable to discontinue the causative agents e.g., valproic acid and bortezomib.
The median serum sodium level at baseline was 124 mmol/l (IQR 122-128) and the median urine osmolality at baseline was 553 mOsm/kg (IQR 478.5-743). Moderate to severe hyponatraemia was already present at admission in 11 of 13 patients, and the serum sodium levels at admission ranged from 110 to 136 mmol/l (median 125 mmol/l, IQR 117.5-126.5). Patients were treated with urea for a median of 5 days (range 2-10) in doses ranging from 10-40 g. The prescribed fluid restriction varied from 750 to 2000 cc/day. In four patients, with a fluid restriction of 1500 - 2000 cc/day, the inability to further restrict fluid intake was the main reason that urea treatment was started. Two of these patients were undergoing tube feeding for poor nutritional status. 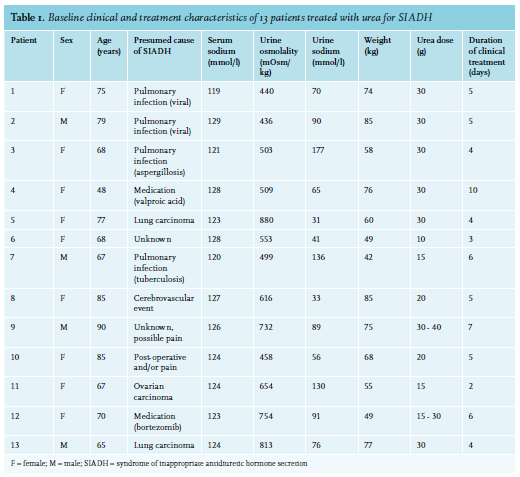 Serum creatinine levels at both baseline and EIT were available for 10 patients and did not significantly differ (table 2). At EIT, normonatraemia was observed in 8 of 13 patients (62%). Two patients (15%) had a serum sodium level between 130 and 135 mmol/l, and two patients (15%) had a serum sodium level of ≤ 129 mmol/l. In patient 3, urea was discontinued due to nausea after four days of therapy, and at that time, the patient had a serum sodium level of 129 mmol/l (figure 1). Six patients reported light to moderate intake difficulties due to the taste of urea, and one of these patients also reported light nausea that was likely related to urea. All of these patients were able to continue urea therapy. Overcorrection was not observed.

Follow-up
In patients 5 and 8, urea was restarted during admission because of a decline in serum sodium. In patient 11, urea was restarted during readmission for hyponatraemia. A total of eight patients received ambulatory urea treatment with a duration ranging from 13 days to > 5 months. This included patients 5, 8, and 11. In the five other patients, urea was directly continued after the first inpatient treatment episode, including both patients with serum sodium levels ≤ 129 mmol/l at EIT. Both patients received a higher dose during ambulatory treatment and showed normalisation of serum sodium during follow-up. The median serum sodium level at two weeks of follow-up was available for six patients and was 134 mmol/l (range 132-141). The median serum sodium level at six to eight weeks of follow-up was available for five patients and was 134 mmol/l (range 128-140).