Measurement of anti-TSH receptor antibodies: what is the correct cut-off value?

Graves’ disease is a frequent cause of hyperthyroidism which can be accompanied by goitre and/or eye disease (orbitopathy).1 The disease is caused by thyrotropin receptor autoantibodies (TRAb). These autoantibodies, present in almost 100% of patients with Graves’ disease, can stimulate the thyroid stimulating hormone (TSH) receptor and thereby cause hyperthyroidism.2 Detection of TRAb is important in the discrimination of Graves’ disease from other causes of hyperthyroidism. In addition to stimulating autoantibodies, certain TRAbs exhibit blocking or neutralising activity. Blocking TRAbs are less common but important to measure, as these antibodies can cause hypothyroidism,3 which can be accompanied by orbitopathy4 and myxoedema.5 TRAbs are present in 1-2% of healthy people and in 6-60% patients with Hashimoto disease.6 As TRAbs are diagnostic for Graves’ disease,7 guidelines recommend measurement of TRAbs in several patient groups. First, in patients with hyperthyroidism to determine the aetiology of thyrotoxicosis (the American Thyroid Association (ATA) Guideline8 and the Dutch Internist Association (NIV) guideline).9 Second, as TRAbs can cross the placenta and cause foetal hyperthyroidism, measurement is recommended in pregnant women that have or have had Graves’ disease (Dutch guideline of Obstetrics and Gynaecology, NIV guideline and International guideline for management of thyroid dysfunction during pregnancy).9-11 There are different types of assays that can measure TRAb levels: bioassays and bridge immunoassays specifically measure stimulating antibodies but not blocking antibodies, whereas competitive immunoassays cannot discriminate between stimulating and blocking antibodies. The latter are the most widely used within laboratories. Of note, even within this assay group, several rounds of optimisation in assay design have taken place, resulting in different assay generations that are incomparable in their measurement (for a complete description and overview see figure 1). Furthermore, as TRAb assays are not standardised (i.e., may be calibrated against different internationally recognised reference materials and/or differ methodologically), concentrations from assays of different companies are not easily comparable.12,13 Overall, due to several reasons, different assays are not comparable and therefore, clinically relevant cut-off values must be established for every method separately.

Recently, a third-generation fully-automated competitive immunoassay (Thermofisher, Phadia, Sweden) was introduced in our laboratory. This assay has been calibrated against the most recent reference standard (World Health Organization (WHO) standard 08/204). The manufacturer determined the cut-off value in an internal study (n = 400, including patients with Graves’ disease, Hashimoto’s thyroiditis, non-autoimmune thyroid diseases, and a variety of non-thyroid diseases).14 The group of Graves’ patients consisted of a mixture of patients that were newly diagnosed and patients that were under treatment. However, upon treatment with anti-thyroid drugs or surgery, TRAb concentration can decline. For example, after one year of anti-thyroid drug treatment, approximately 60% of the treated patients are negative for TRAb measurement.14 Treatment with RAI ultimately also leads to a decrease in TRAb concentration, although RAI can lead, in the first year, to an initial increase.15,16 In this study, the aim was to verify that the cut-off value established by the manufacturer also holds true in our population. Additionally, the aim was to study the influence of including treated Graves’ disease patients in the determination of the cut-off value, since TRAb measurement is primarily used for diagnostic purpose, and the cut-off value could be influenced by patients treated. 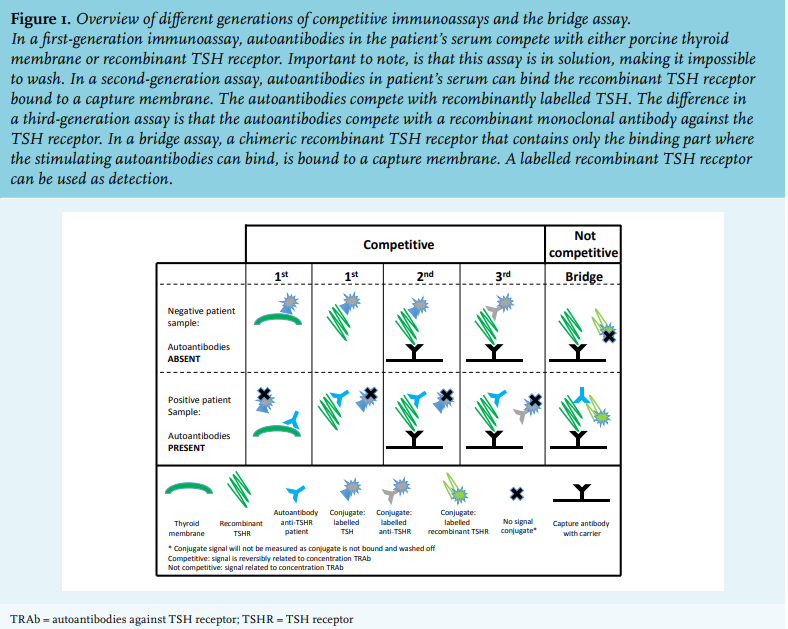 
Patients
Samples used for retrospective analyses were from all patients referred for TRAb testing from February to April 2018 and November 2018 to January 2019 from two hospitals (Maasstad Hospital, Rotterdam and Spijkenisse Medical Centre, Spijkenisse, both in the Netherlands). For our study, we included patients that were newly diagnosed for the most frequent causes of hyperthyroidism and who fulfilled the following criteria: age > 18 years, not pregnant, seen by an internist, and no medical history of Graves’ disease. These 61 patients consisted of 28 patients with Graves’ disease, 15 with multinodular goitre or toxic adenoma, and 18 with thyroiditis. In addition, we included Graves’ patients that were under treatment with antithyroid drugs at the time of TRAb measurement. Treatment was either monotherapy thiamazole or in combination with thyroid hormone (the so-called block and replace therapy). Graves’ disease was diagnosed according to both the NIV guideline9 and the comparable American guideline.8 More specifically, the diagnosis was based on the presence of (subclinical) hyperthyroidism, with clinical context including presence of orbitopathy and diffuse uptake as seen with 99mTc scintigraphy, or diffuse enlargement of the thyroid by ultrasound. The criteria for Graves’ disease were presence of (subclinical) hyperthyroidism, clinical symptoms fitting Graves’ disease, and positive TRAb. Of note, as the aim of this study was to determine the cut-off value for the TRAb assay; 6/7 patients with TRAb concentrations below 6 IU/l had, in addition to (subclinical) hyperthyroidism, scintigraphy results resembling Graves’ disease. In one patient with TRAb concentration of 4.5 IU/l, radiography was not performed. This patient was diagnosed with Graves’ disease because clinical follow-up of treatment matched Graves’ disease, the typical age (30 years), and absence of palpable nodes in the thyroid. The study was approved by the local medical ethical committee.

Methods
Samples were measured with a third-generation competitive immunoassay: EliA-anti-TSH-R well (Thermofisher Scientific, Phadia, Sweden). The method is based on the competition of the autoantibody with a monoclonal antibody against the TSH receptor labelled with beta-galactosidase. This method is standardised against the most recent WHO standard 08/204. According to the manufacturer, the interval of 2.9-3.3 IU/l is referred to as grey zone area and a concentration above 3.3 IU/l is considered positive. The total coefficient of variance (CV) was established by determination of the within run and between run CV of three samples with different concentrations of TRAb. The within run resembles the analytical variation based on multiple measurements of the same sample within one run. The between run variation resembles the analytical variation of the same sample measured on different days. Between run and within run CV were calculated by duplicate measurements of the same sample in 10 different runs on five different days using a common laboratory procedure protocol for the determination of random error using the EP evaluator version 12 software (Data Innovations LLC, South Burlington, VT, USA).

Statistical analysis
The distribution of TRAb results showed non-Gaussian distribution, therefore the results are presented as median and interquartile range. In order to determine the optimal cut-off value, receiver operating characteristics (ROC) curve analysis was performed with EP evaluator version 12 software. This analysis revealed the percent efficiency: the percent of all results that are classified correctly (the true positives and true negatives). The optimal cut-off value was determined as the cut-off value with maximal percent efficiency. 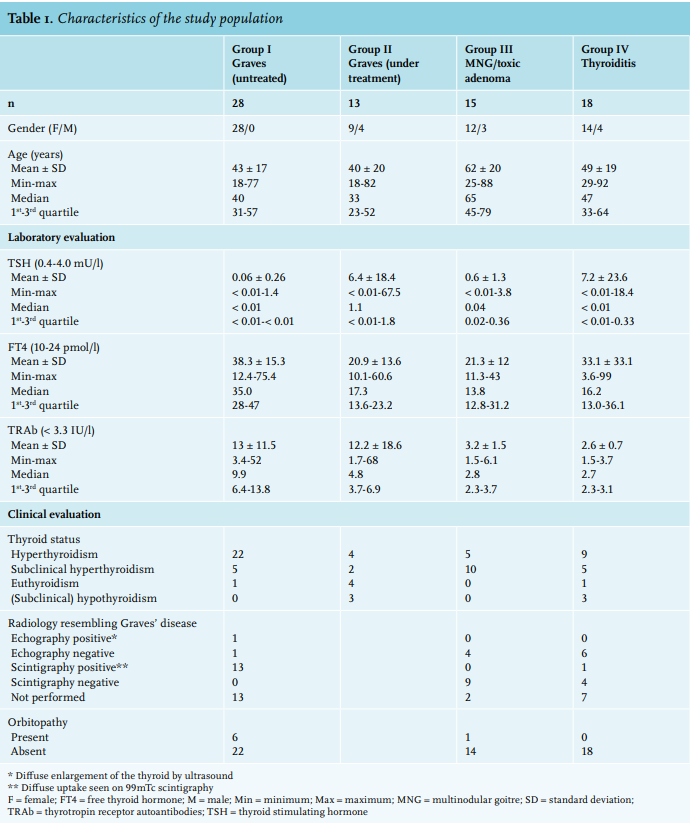 Random error: coefficient of variance
We determined the within run, between run, and total CV (Supplementary table 1). The CV increases with decreasing antibody concentrations, and is relatively high in the lower concentrations. The sample with a TRAb concentration of 2.2 IU/l had a total CV of 26.4%, whereas at 9.6 IU/l, the total CV was 16.7%. According to the manufacturer, the CV at the cut-off value 3.3 IU/l is 15%, but at 2.9 IU/l > 20%. 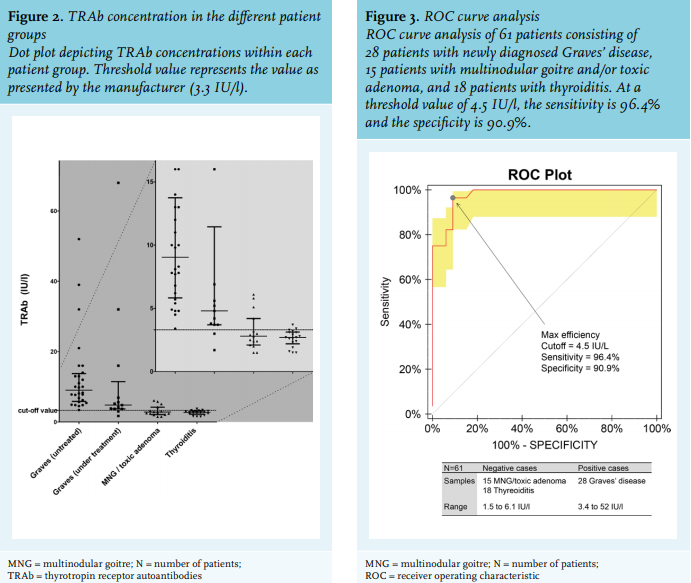 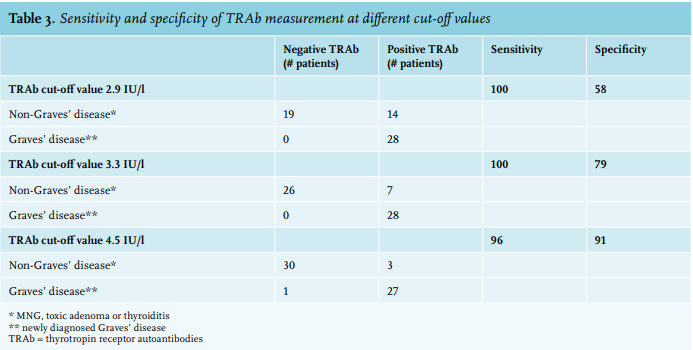 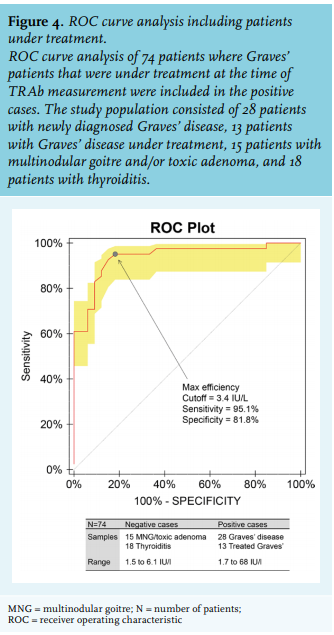 The authors thank G. Verloop and K. v.d. Laan for their contribution to the TRAb measurements. 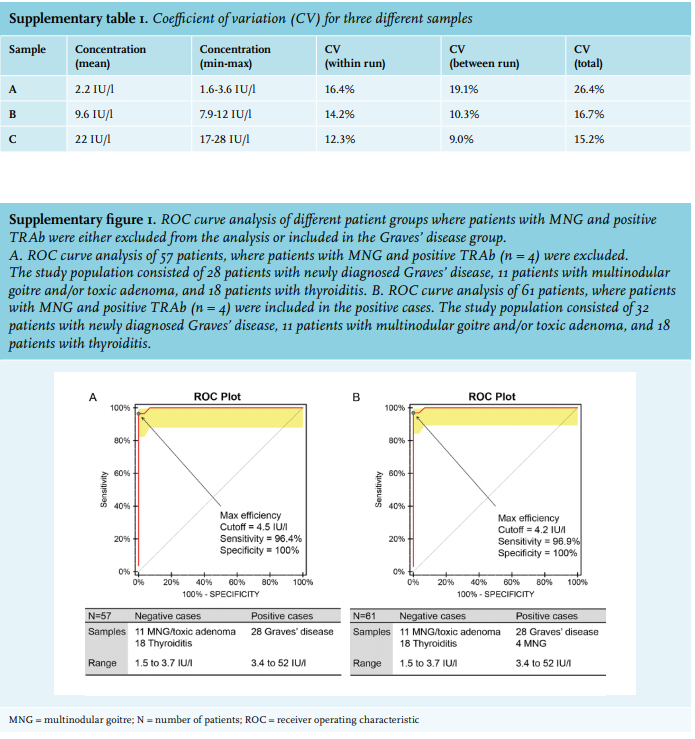