A diphtheria case in Indonesia: a future foe to Europe? 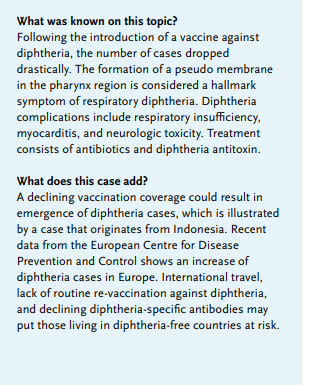 Corynebacterium diphtheria, a non-encapsulated grampositive rod-shaped bacterium, can cause severe disease in humans. Physicians in European countries are usually familiar with this pathogen for its part in childhood vaccination programs. Following the introduction of vaccinations in the mid-twentieth century, the number of diphtheria cases dropped drastically. Therefore, it is not unlikely for a young doctor to not directly recognise the hallmark symptoms of classical (respiratory) diphtheria. In recent years, multiple cases and outbreaks were reported on ProMED-mail (Program for Monitoring Emerging Diseases)1 and in literature2-4 and concerns about vaccination coverage were raised.5 Since 2017, an increasing number of diphtheria cases6,7 have been recorded in the Republic of Indonesia (population: 266 million), which was followed by an immunisation effort to vaccinate two million children.8 This outbreak is not only of importance for local healthcare workers, but can be of international significance due to the popularity of Indonesia as a travel destination. We therefore present the following case.

In January 2019, a 22-year-old woman, without medical history, visited the emergency department of the Universitas Airlangga Hospital in Surabaya (a university teaching hospital), East Java, Indonesia with complaints of cough and dysphagia. Symptoms started four days prior to admission. In addition, she reported a fever for the past six days. There was no stridor or dyspnoea. She lived in the city of Surabaya, but went camping in the West Java province one week before onset of the first symptoms. None of her family members nor anyone in her close proximity suffered from similar symptoms. She received her childhood vaccinations 20 years ago, of which no registration was available. Physical examination showed isolated white spots on her both tonsils and pharynx (figure 1), but none on her uvula. A gram stain of the tonsillar swab showed gram-positive rod-shaped cells with metachromatic (beaded) staining. Due to restricted laboratory resources, no further determination was performed and the case was classified as ‘clinically compatible’ with diphtheria (see Discussion). She received anti-diphtheria serum 40,000 IU intravenously and was prescribed erythromycin 500 mg four times a day (QID) for five days. The patient recovered and the lesions disappeared on the third day of treatment. She was discharged after 10 days in the hospital. During this period, we screened first-degree family members and performed nasal swabs, which were sent to a regional reference lab. All first-degree family members were given prophylactic erythromycin 250 mg QID for seven days per governmental guidelines, regardless of test results. 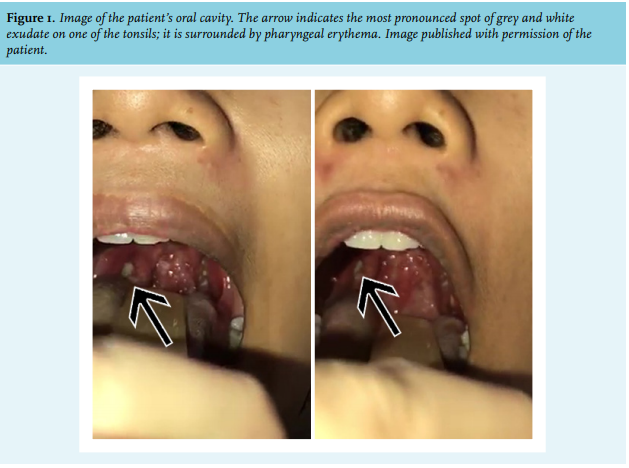 Diphtheria is a highly contagious disease that is usually recognised in patients upon the existence of a tough pharyngeal pseudo membrane. Infection with C. diphtheria may either lead to respiratory or cutaneous symptoms or to an asymptomatic carrier state. After a two to five-day incubation period, the respiratory infection manifests with a gradual increase of symptoms of a sore throat, malaise, and lymphadenopathy. Pharyngeal erythema progresses to spots of grey and white exudate (shown in figure 1). The formation of a pseudo membrane that adheres tightly to the underlying tissue is considered pathognomonic and occurs subsequently, in one-third of all cases. Complications occur by the spread of the pseudo membrane in the pharynx, resulting in stridor and eventually leading to respiratory insufficiency with case fatality rates reported up to 20%.9 Furthermore, absorption and dissemination of toxins can lead to myocarditis, renal failure, and neurologic toxicity. A suspected case should be confirmed with clinical specimens (i.e., swabs) by culture and toxin detection. Primary culture is done on blood tellurite medium, followed by selective culture on cystinase medium (Tinsdale). Screening and biochemical tests can identify the species. Confirmation is based on the phenotypic detection of the toxin (Elek test).10 Treatment consists of antibiotic therapy and those infected with toxin-producing strains benefit from prompt administration of antitoxin (hyperimmune antiserum). Airway management is important to prevent airway obstruction and cardiac function should be monitored. In case of respiratory diphtheria, droplet isolation could prevent further spread.

Early vaccine research against diphtheria started in the 1920s and today, childhood vaccination against this pathogen is common around the world.11 High vaccination coverage (80-85% on the population level) is considered a cornerstone in the prevention of new infections.12 The recent outbreak response only targets children and adolescents, and the case presented here is illustrative of the susceptibility of those with possible impaired antibody titres due to non-repeated vaccination.


The European Perspective
Over the past decades, although limited numbers of diphtheria have been reported in European countries, clinicians do treat diphtheria infections: The European Centre for Disease Prevention and Control (ECDC) reported 17 diphtheria cases in 2017 in Europe, of which four were reported as classical respiratory diphtheria. Three out of the 17 were considered from indigenous transmission.13 These illustrate both the necessity to be adequately protected by means of a repeated vaccination, as well as the need for healthcare providers to be aware of the clinical landscape. Interestingly, routine vaccination programs of European Union countries are not uniform in their recommendations for repeated diphtheria vaccination throughout adolescence, early adulthood, and middle age.14 For some countries, repeated vaccination (for example, during late adolescence) is not included and only suggested by travel medicine guidelines or disease-specific guidelines. Travel to Saudi-Arabia for the Hadj/Umrah gatherings, for example, does not require a recent vaccination against diphtheria. On the other hand, the country was able to contain an ongoing outbreak of Neisseria meningitides by demanding a mandatory vaccination when entering the country.15 This highlights the possible importance of routinely administering repeated vaccination as it is known that diphtheria-specific antibodies can remain below levels of protection and that long-term protection is frequently not achieved.16,17 This impaired protection against C. diphtheria might thus put those living in diphtheria disease-free countries at risk.