Iron deficiency (ID) is commonly reported in the general population, in particular, in post-menopausal females. In a cohort of 29 million American patients, there is a 31.7% prevalence of ID.1 Iron is an essential micronutrient with various functions in haematopoiesis, oxygen transport, DNA synthesis, and numerous physiological metabolic mechanisms.2 ID can cause various symptoms in the absence of anaemia, such as asthenia,3 depression,4 and chronic heart failure aggravation.5 Iron supplementation in this population (with iron deficiency) improved these symptoms.6,7 Standard therapy for ID treatment is based on oral iron supplementation.3 Nevertheless, oral iron leads to frequent (20-35%) adverse events (nausea, abdominal pain, constipation, diarrhoea).8 These gastrointestinal side effects can impair adherence to treatment (up to 33% of treatment discontinuance).9 While oral iron supplementation is well studied in ID without anaemia, data are lacking for intravenous iron supplementation. 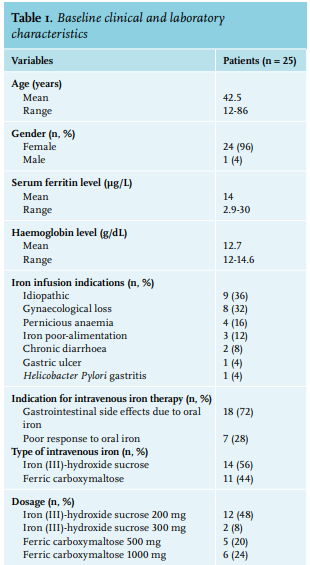 non-anaemic patients. We conducted a prospective observational single-institution study on subjects with ID as defined by serum ferritin < 30 ng/mL; they did not have anaemia (haemoglobinaemia > 13 g/dL in men and > 12 g/dL in women) but did have fatigue. They received intravenous iron supplementation from November 2016 to November 2017 in an internal medicine department. We evaluated their fatigue on the Fatigue Severity Scale (FSS) at the moment of iron infusion. The FSS is a self-assessment questionnaire with nine items to assess fatigue.10 The patients scored all the items on a scale between 0 and 7 (range of cumulative score: 0-63). The patients completed the FSS again via a phone call at 4 and 12 weeks after infusion; the phone call at 4 weeks also included questions about infusion side effects. We asked them about their serum ferritin levels at 12 weeks after infusion. The objective was to test the efficacy of intravenous iron in improving FSS at 4 weeks after infusion. Quantitative variables were described using means and range or standard deviations; categorical variables were described using numbers and percentages. Comparison of FSS and serum ferritin at the baseline and during the follow-up was performed using a paired sample t-test. The tests were two-sided. P-values < 0.05 were considered significant. All analyses were performed with R software.


We enrolled 25 patients, 24 females and one male. Baseline clinical and laboratory characteristics are presented in table 1. All patients reported a disabling fatigue at the day of infusion (W0) with a mean FSS of 49.3+/-13.7. There was a significant improvement in FSS at the 4-week time-point (W4) with an FSS of 44+/-15 (p = 0.01) and sustained measurements at the 12-week time-point (W12) with a FSS of 35.8+/-17.1 (p < 0.0001) (table 2). In a linear regression analysis, age, sex, type or dosage of treatment, the cause of ID, serum ferritin at W0, and haemoglobin were not associated with the decrease of FSS at W4 or W12. The serum ferritin level was measured in 17 patients at W12 (8 patients did not follow the biological prescription); the mean serum ferritin at W12 was 55.8 µg/l (range: 12-138). No serious adverse events were reported due to intravenous iron infusion. Drug-related side effects were reported in six patients (24%): asthenia (2 patients, 8%), nausea (2 patients 8%), headache (1 patient, 4%), and local pain at the infusion point (1 patient, 4%). One randomised, placebo-controlled study on 250 iron-deficient non-anaemic women highlighted the efficacy of a single dose of 1000 mg ferric carboxymaltose on fatigue eight weeks after infusion.11 Another randomised, placebo-controlled study evaluated the efficacy of iron (III)–hydroxide sucrose versus placebo on 90 iron-deficient non-anaemic women with a serum ferritin concentration < 50 ng/ml. There was no significant difference on a FSS at 6 and 12 weeks.12 However, there was significant efficacy of this treatment at 6 weeks in the subgroup with serum ferritin < 15 ng/ml. This suggests, similar to our results, that intravenous iron could be more effective in a population with a serum ferritin concentration below 30 µg/l. This report is one of the rare studies evaluating efficacy of intravenous iron supplementation on fatigue in a real-life setting. The main concern of this study is the absence of a blinded placebo-controlled arm. The effect of iron on fatigue could be in part, due to a placebo effect. With this in mind, the prolonged impact of intravenous iron at W12 may not favour a placebo effect but could be related to the effect of intravenous iron. This fatigue-decreasing effect ref lects the non-haematologic effects of iron. An evaluation of the treatment schedules for future re-infusion of intravenous iron is needed to establish clinical protocols.

DISCLOSURE
The authors have no conflicts of interest to declare.