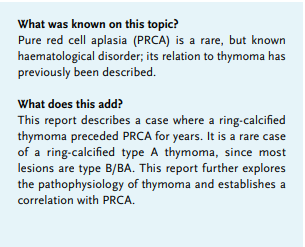 Pure red cell aplasia (PRCA) is a rare bone marrow disorder with absence of erythropoiesis, characterised by normocytic or macrocytic anaemia and low reticulocyte count; other cell lineages in the bone marrow are normal.

Congenital PRCA, associated with mutations in ribosomal protein or the GATA1 transcription factor, manifests in infancy and is associated with other congenital abnormalities and predisposition to cancer.1 Recently, PRCA has been described in patients with adenosine deaminase 2 (ADA2) protein deficiency.2 Acquired PRCA is classified as primary or secondary PCRA. Primary PRCA consists of primary auto-antibody-mediated PRCA and primary dysplastic PRCA. Secondary acquired PRCA in adults is mostly idiopathic but may be associated with autoimmune/immunological diseases, solid and haematological tumours, viral (especially parvo B19) and bacterial infections, and a variety of drugs.
PRCA is traditionally thought to be associated with thymoma, although recent studies reveal that only 10-30% of PRCA are associated with thymoma, and that fewer than 5% of patients with thymoma develop PRCA.3,4 Thymoma is either diagnosed during the work-up of PRCA, or PRCA develops during follow-up after thymectomy. We present an 80-year-old man who developed PRCA after living with an existing pericardial-mediastinal mass with ring calcification for more than 10 years, which was identified as a type A thymoma. 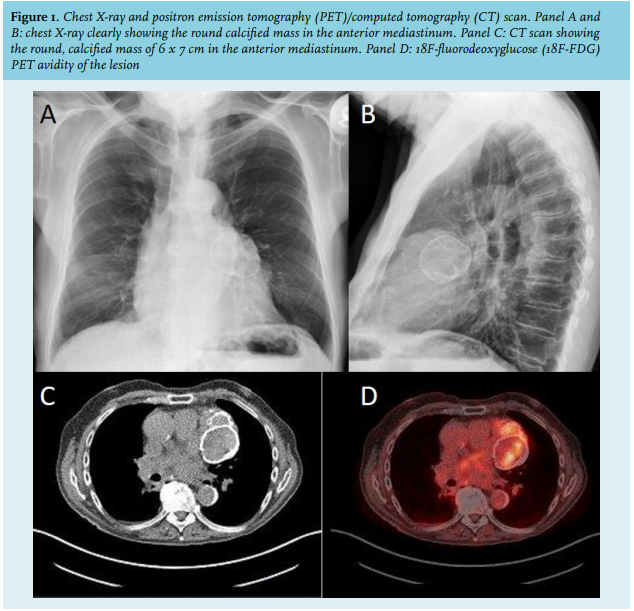 An 80-year-old male was referred to us with complaints of anaemia one year after chemo-radiation treatment for T1N2M0 squamous pulmonary carcinoma. At that time, his haemoglobin (Hb) was 14.8 g/dl (12.8-16.8) and radiological examination revealed an additional calcified pericardial-mediastinal mass (figure 1A-D), which was unaltered compared to 11 years earlier. The patient complained of shortness of breath at exercise. Physical examination was unremarkable. Laboratory examination revealed Hb 7.3 g/dl, mean corpuscular volume 102 fl (83-100), reticulocyte count 6.7 x 109/l (25-120), 0.3%, with normal leucocyte and thrombocyte counts. Serum vitamin B12 and folic acid were normal, serum ferritin was 949 µg/l (30-300), and erythropoietin concentration was 239 U/l (4.4-15.8). There were no signs of haemolysis, and immunoglobulins levels were normal. Virologic testing showed no abnormalities and patient did not use any medication associated with bone marrow suppression or anaemia. Bone marrow examination revealed absent erythropoiesis, normal myelopoiesis and megakaryopoiesis (figure 2A, B), and abundant stainable iron. Cytogenetic examination showed normal male karyotype. PRCA was diagnosed and treatment with prednisone (1 mg/kg, resulting in a daily dose of 60 mg) was started without restoration of the erythropoiesis. Treatment with cyclosporine was considered, and refused by the patient. The patient was unfit for surgical resection and died of pneumonia shortly after. Autopsy identified an 8 x 6 cm calcified mass which was easily separated from both the pericardial sac and the surrounding lung tissue (figure 2C). After decalcification, a type A thymoma was diagnosed upon microscopic examination (figure 2D). 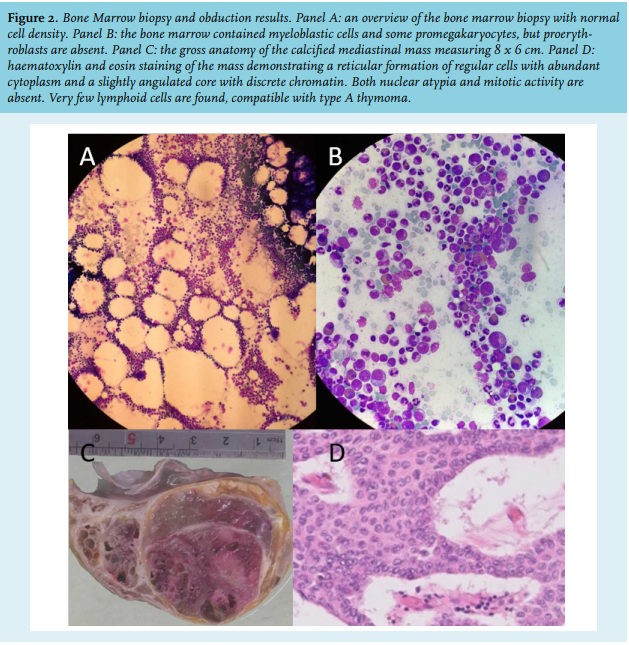 Thymoma is a rare (incidence 0.13 per 100,000) epithelial mediastinal tumour of the thymus.5 There are no well-defined radiological and histological criteria to differentiate between benign and malignant variants. Invasion into the surrounding vasculature, lymphatics, and adjacent structures are considered as malignant features.6 The current World Health Organisation classification stratifies thymoma based on the ratio between lymphocytes and epithelial cells.7 Type A thymoma tumours consist of thymic epithelial cells with a spindle shape (formerly known as spindle-cell tumour or medullary thymoma) without nuclear atypia and absent lymphocytes. Type AB thymoma resembles the histology of type A thymoma but have areas with reactive lymphocytes. The histology of type B1 tumour resembles a normal thymus cortex with round epithelial cells and abundant lymphocytic infiltration. Type B2 tumours have plump cells with vesicular nuclei and heavy populations of lymphocytes. Type B3 (atypical thymoma or well-differentiated thymic carcinoma) consists of round epithelial cells with mild atypia and very few lymphocytes. Type C thymomas or thymic carcinoma have clear-cut cytological atypia and absent cytoarchitectural features. Types A, AB, and B1 thymoma are mostly considered benign and type B2 and B3 have high risk for malignancy. As observed with a CT scan, thymoma typically has smooth or lobulated contours with mostly homogeneous contrast enhancement. Invasiveness is difficult to establish. Size, irregularity, the presence of cystic, necrotic, or calcified areas within the tumour and fat infiltration around the tumour are reported as signs of high-risk or high-stage thymoma.8 While calcification of the thymoma on a CT scan is not uncommon and associated with the presence of high-risk and malignant thymoma, ring calcification as observed in our patient is rare and associated with type B thymoma.9
Thymoma is associated with a broad spectrum of autoimmune diseases such as myasthenia gravis and autoimmune cytopenia, including PRCA and Good’s syndrome (immune deficiency associated with hypogammaglobulinaemia).4 Autoimmune diseases are usually diagnosed shortly after or concomitant with the detection of the thymoma. In 15% of patients, thymoma may precede autoimmune diseases with a median of approximately a year, and nearly 10% of patients develop autoimmune diseases after thymectomy. Thymoma-associated autoimmune diseases may be related to the histopathologic subtype. Myasthenia graves is commonly observed in types AB and B thymomas, whereas Good’s syndrome is strongly associated with types A and AB thymoma.4,10 PRCA is mostly found in type A thymoma, as in our patient.10 The mechanism of autoimmunity in thymoma-associated autoimmune diseases is complex and heterogeneous. While in myasthenia gravis, humoral immunity plays a central role, the destruction of the erythroid progenitor or precursor cells, characteristic for PRCA is primarily mediated by autoreactive T cells, although insights are emerging on the role of auto-antibodies as well.11,12
Treatment of PRCA is typically focused on the inhibition of these T cells and include prednisolone, cyclosporin, methotrexate, and alemtuzumab. In thymoma-associated PRCA, resection of the thymoma seems a logical cure for PRCA resulting in remission rates of approximately 30% after resection.13 In a relatively large number of case series, 12 out of 13 patients with both thymoma and PRCA underwent surgical excision and none of those patients experienced complete remission of the associated PCRA. Thus, the majority of patients still required immunosuppressive therapy after resection. Prednisolone has a reported response rate of 30-60% in idiopathic and thymoma-associated PRCA.12,14 Small studies revealed a high response rate for cyclosporine.14 Finally, successful treatment with an anti-CD20 monoclonal antibody (Rituximab) has been described.15

This report describes a unique patient with a PRCA that was preceded for at least 10 years by a highly metabolic ring-calcified pericardial mass, which was identified as a type A thymoma at autopsy.