In our patient, we diagnosed a Salmonella-infected aortic aneurysm which compressed the adjacent inferior vena cava, causing bilateral deep venous thrombosis and secondary pulmonary embolism. These series of events occurred after, and most likely because of, a seemingly self-limiting gastroenteritis.
This patient was infected by Salmonella enterica, a non-typhoidal Salmonella (NTS) species, which consist of strains other than S. Typhi and S. Paratyphi. Salmonella enterica accounts for the majority of salmonella infections in humans, and predominately occurs from contact with animals or ingestion of contaminated animal products such as milk, poultry, and eggs.1,2 NTS infection is a commonly diagnosed illness, affecting millions annually. In patients with NTS enteritis, there is about a 6% chance of developing NTS bacteraemia,2 which can cause possible lethal complications such as septic shock, meningitis, endocarditis, bone/joint infections, and vascular infections.1,2 Salmonella has the ability to invade the normal arterial intima. However, this risk is increased in the presence of atherosclerosis, leading to infectious aneurysms. The incidence of developing vascular infections in patients over the age of 50 years during NTS bacteraemia is estimated to be as high as 25%, especially with underlying atherosclerosis or vascular prosthesis. The mortality rate in vascular NTS infections is high: up to 90% with antibiotic treatment alone, and around 40% when combined with surgery.3
Therefore, treatment of NTS-infected aneurysms consists of a combination of antibiotic therapy and surgery. Complete surgical removal of the infected tissue after sufficient pre-operative antibiotic therapy is preferred. However, due to the high perioperative risks of open aortic surgery,4 this is not always possible. In such cases, less invasive endovascular repair could be considered to avoid rupture of the aneurysm; however, as the infected tissue remains in situ, this will inevitably lead to a chronic infection, including infection of the vascular prosthesis itself. Endovascular repair needs to be followed by very long term (sometimes lifelong) antibiotic therapy to prevent other complications. 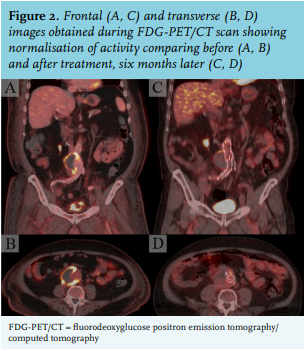 Despite antibiotic therapy with ceftriaxone and ciprofloxacin, the aneurysm diameter in our patient increased from 57 to 71 mm over a period of one month. Open surgery with resection of the mycotic aneurysm to remove infected tissue and prevent rupture was considered, but regarded too risky because of a recent pulmonary embolism, current active infection, and previous abdominal surgery. Therefore, the patient underwent endovascular aorta repair (EVAR) surgery to prevent rupture. Because the infected tissue could not be removed, antibiotic therapy with ciprofloxacin was continued. After eight months of follow-up, the previous symptoms vanished, and erythrocyte sedimentation rate (ESR) decreased from 97 to 31 mm/hour. C-reactive protein decreased from 266 to 10 mg/l. PET-CT showed normalisation of FDG-uptake (figure 2). Cessation of antibiotics will be considered in the near future.

Complications due to NTS infection can be difficult to diagnose, especially when there is no current gastrointestinal symptom or recent diagnosis of NTS infection, as in our patient. Awareness of this rare but severe complication of a relatively common gastro-intestinal infection is essential to establish early diagnosis and treatment of affected patients.