Febrile neutropaenia (FN) is a common and potentially life-threatening complication of chemotherapy, with a reported overall mortality of up to 10%.1-4 Furthermore, FN is associated with substantial morbidity and costs,4-6 often resulting in treatment delays, dose reductions, and even cessation of treatment;7 all result in poorer outcomes.8-10 Therefore, preventing febrile neutropaenia is of high clinical relevance, especially in the curative setting.
A well-known supportive care intervention is the use of granulocyte colony-stimulating factor (G-CSF), which stimulates the proliferation of neutrophils and thereby minimises the incidence of FN and its associated morbidity and costs.11-14 However, the use of G-CSF itself is relatively expensive (approximately € 1,000 per injection)15 and it is associated with side effects such as thrombocytopaenia and muscle-, joint-, and back pain (1-10%).11,15 Both European and American guidelines recommend the use of primary G-CSF prophylaxis in cases of FN risk ≥ 20%.16-20
As FN rates in randomised clinical trials (RCTs) are significantly lower than in observational studies,21 it is important to study the incidence of FN after specific chemotherapy cycles in daily clinical practice to provide clinicians with clinically applicable recommendations for G-CSF use. However, despite the global and widespread use of chemotherapy, high quality literature on the incidence of FN during specific chemotherapy regimens in daily clinical practice in various cancer types, for example, breast cancer, is scarce.22 In addition, guidelines usually lack advice when to administer G-CSF. Thus, although the 20% cut-off may be clear, it remains unclear when to use primary G-CSF prophylaxis in daily clinical practice.
In our experience, a substantial number of breast cancer patients treated with docetaxel (100 mg/m2) experienced FN during these chemotherapy cycles, which was in concordance with the experience of four regional cancer centres in Ontario, Canada.23 Two systematic reviews also reported median FN rates of 23.9%22 and 30.6%24 in a specific regimen, containing three cycles of FEC (5-fluorouracil 500 mg/m2, epirubicin 100 mg/m2, cyclophosphamide 500 mg/m2  every three weeks followed by three cycles of docetaxel (100 mg/m2) (3F-3D) every three weeks, yet they did not specify in which specific cycles the risk of FN was highest.
In contrast, another widely used regimen consisting of four cycles of AC (doxorubicin 60 mg/m2, cyclophosphamide 600 mg/m2) every three weeks, followed by 12 weekly cycles of paclitaxel (80 mg/m2)(4AC-12P) seems to cause FN in substantially fewer patients, with FN rates during AC cycles ranging from 2.5%25 to 16.1%,26 although literature is scarce.
Recently, Aagaard et al. developed a risk score for febrile neutropenia after chemotherapy (FENCE score), both for the first cycle of chemotherapy27 and for cycles 2-6 in patients with solid cancers.28 This risk score27 is easily available online and requires various patient and chemotherapy characteristics. Although the FENCE score may be a helpful tool, it does not discriminate between different taxane regimens while, in our experience, other taxane regimens such as weekly paclitaxel, almost never cause FN. Thus, simply following the FENCE score may lead to unnecessary administration of G-CSF. Therefore, the question remained whether the use of primary G-CSF prophylaxis would be justified during all or a specific cycle of docetaxel for breast cancer patients.
The primary aim of this study was to provide clinical recommendations for the use of primary G-CSF prophylaxis in breast cancer patients by assessing data from daily clinical practice. We assessed and compared the incidence of chemotherapy-induced FN in breast cancer patients receiving either the 3F-3D or 4AC-12P regimens, both of which are widely used in primary breast cancer care.29,3

Study population
This study was assessed by the Research Assessment Committee and approved by the board of directors of the Meander Medical Centre.
All breast cancer patients receiving neo-adjuvant or adjuvant chemotherapy with either 3F-3D or 4AC-12P in the Meander Medical Centre between January 1st, 2014 and December 31st, 2015 were identified. Patients receiving alternative chemotherapy regimens were excluded.
For each patient, data on gender, age, tumour characteristics, and type of chemotherapy regimen were obtained from the electronic patient files. Episodes of FN, any subsequent dose delays, and any emergency department visits were identified and analysed, as was the use of G-CSF.
In general, hormone-positive, human epidermal growth factor receptor 2 (HER2)-negative patients were given 3F-3D and triple negative or HER2-positive patients were given 4AC-12P. For HER2-positive patients, the 12 paclitaxel cycles were combined with administration of the monoclonal antibody trastuzumab, which was continued as weekly monotherapy up to a total treatment duration of one year. However, the choice of chemotherapy regimen was determined by the attending medical oncologist, in consultation with the patient; when necessary, in the expert opinion of the medical oncologist, choice of chemotherapy regimen could differ from regional policy. FEC (5-fluorouracil 500 mg/m2, epirubicin 100 mg/m2, cyclophosphamide 500 mg/m2), AC (doxorubicin 60 mg/ m2, cyclophosphamide 600 mg/m2), docetaxel (100 mg/ m2), and paclitaxel (80 mg/m2) were all administered in protocolled doses.

Neutrophil counts were measured one day in advance, or on the day of the planned chemotherapy cycle. Chemotherapy cycles were delayed when neutrophil count was below 1000 cells/mm3. In addition to the protocolled measurements, neutrophil count was only monitored when patients experienced fever during their chemotherapy.
FN was defined as any fever ≥ 38.5°C, reported by the patient or measured in the hospital, in combination with an absolute neutrophil count of < 500 cells/mm3. Patients were instructed to contact and visit the emergency department in any case of fever. When patients visited the emergency department for a possible FN episode, a full physical examination was performed, followed by the collection of blood samples, urine samples, and a chest X-ray to identify a focus of the fever. If patients did indeed experience an FN episode, they were admitted and treated with intravenous antibiotics, according to hospital protocol.
Overall, the incidences of FN in patients undergoing 3F-3D and 4AC-12P were compared. Since trastuzumab is not kwown to cause myelotoxicity, the HER2-positive patients who received 4AC-12P with trastuzumab during the paclitaxel cycles were included in this group in our analyses. Finally, to evaluate the risk of FN during specific chemotherapy cycles, all first administered cycles of AC, FEC, docetaxel, and paclitaxel were compared and odds ratios with a 95% confidence interval were calculated.

Patients and tumour characteristics
In total, 227 patients breast cancer patients who received chemotherapy between January 1st, 2014 and December 31st, 2015 were identified. Six patients were excluded for receiving an alternative chemotherapy regimen. These patients received their specific chemotherapy regimen because of comorbidity or previous chemotherapy cycles for prior malignancies. Therefore, a total of 221 patients, all receiving the 3F-3D or 4AC-12P-regimen, were included in the data analyses.
All patients were female with a mean age of 52.9 years (SD ± 9.7 years) (table 1) and no distant metastases were present upon diagnosis, except for one patient who had an oligometastasis in her ileum for which an ileocecal resection was successfully performed. 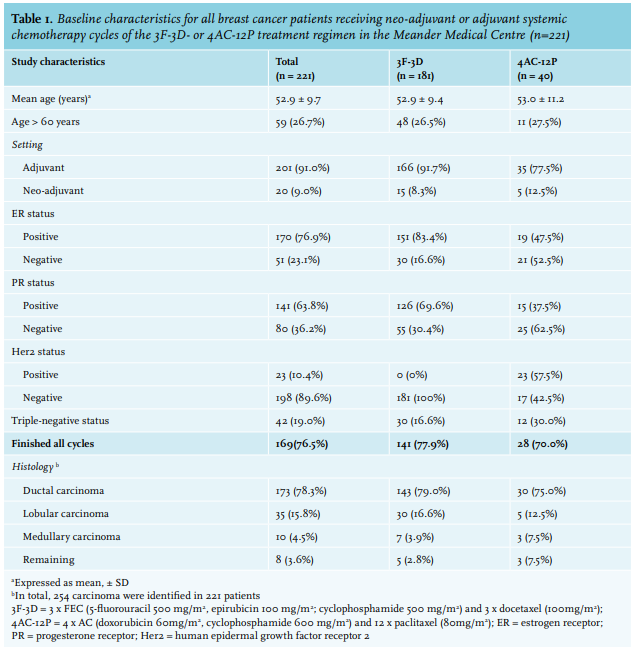 Febrile neutropaenia
FN was identified in 61 patients (27.6%) who developed a total of 66 FN episodes. Patients receiving 3F-3D developed significantly more FN episodes during any of their cycles than patients receiving 4AC-12P (31.5% versus 10.0%, OR 4.14, 95% CI: 1.41-12.18) (table 2). Three patients experienced two FN episodes and one patient experienced three episodes, all within the same type of cycles in the 3F-3D group and without G-CSF prophylaxis after their first FN episode. There were no repeated episodes of FN in the 4AC-12P regimen and paclitaxel never caused FN. 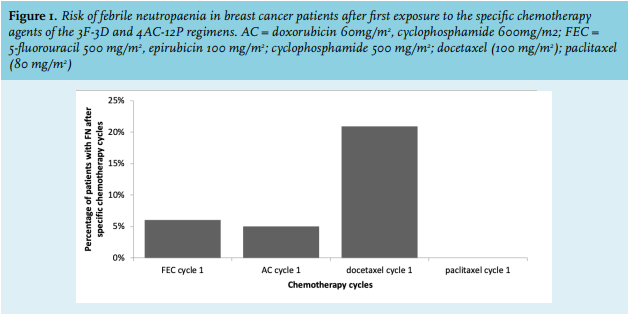 G-CSF use
G-CSF was administered in 8.1% of all chemotherapy cycles (135/1657) in 50 patients in total (22.6%). Both pegfilgrastim and lipefilgrastim were used as a G-CSF analogue. The use of G-CSF was not protocolled yet, when prescribed, it was mostly as a secondary prophylaxis with the next cycle of chemotherapy after an FN episode. Four patients (8.0%) received G-CSF as primary prophylaxis due to their age (> 60 years) in combination with a fragile condition. Two episodes of neutropaenia occurred while patients received G-CSF to prevent neutropaenia. However, these two episodes were both not complicated by fever or cycle delay due to neutropaenia and in both cases, neutropaenia was not profound (< 500 cells/mm3).

Focus of infection
The respiratory tract was the most common focus of infection, affecting 13.6% (9/66) of patients; this was a clinical diagnosis without confirmation by a positive culture in all cases. Urinary tract infections and mucositis both occurred separately in 10.6% of FN episodes (both 7/66). Various other foci were identified in 25.8% of FN episodes, for example pneumonia, sinusitis, and ileocolitis. In 39.4% of FN episodes, a focus was not identified (26/66). Overall, pathogens were only isolated in 9.1% of FN episodes (6/66), of which 50.0% (3/6) involved Escherichia coli. FN patients spent a median of five days in the hospital (range: 2-31 days).

In conclusion, this study with data based on regular clinical practice shows that incorporating docetaxel monotherapy (100 mg/m2) in a neo-adjuvant or adjuvant chemotherapy regimen in the treatment of breast cancer patients renders a high risk of FN compared to a weekly paclitaxel-containing regimen, 31.5% versus 10.0%, (OR 4.14, 95% CI: 1.41-12.18). Our analysis of the docetaxel monotherapy section of the treatment regimen demonstrates that the risk of FN (20.9%) clearly surpasses FN risk following paclitaxel monotherapy (0%), and it is also considerably higher than the FN risk of the anthracycline section in both regimens (~ 5%). It can therefore be concluded that, according to international guidelines, the nearly 21% risk of FN justifies the use of primary G-CSF following docetaxel monotherapy.

All authors declare no conflicts of interest. No funding or financial support was received.
This study was assessed by the Research Assessment Committee and approved by the board of directors of the Meander Medical Centre.

The authors kindly acknowledge Pieternel Pasker-de Jong, epidemiologist in the Meander Medical Centre for her support in the statistical analysis of this study