Soft tissue infection after photoselective vaporization of the prostate: a life-threating complication

Lower urinary tract symptoms are common in adult men, especially with increasing age. Bladder outlet obstruction (BOO) is one of the most prevalent aetiologies, affecting up to 80-90% of men above 70 years of age.1 Transurethral resection of the prostate (TURP) is considered the surgical therapy of first choice for BOO.2 In 2002, photoselective  vaporisation  (PVP)  was introduced  as a  novel technique, using  a  532 nm laser light, which is absorbed by haemoglobin leading to vaporisation of prostate tissue. It is preferably used in larger prostate volume and patients using anticoagulation therapy.3 Common complications are irritative symptoms, urinary retention and urinary tract infection (UTI).4 Here, we discuss a patient with a rare but serious complication of PVP.


CASE REPORT
A 73-year-old man presented to the emergency department with fever, chills, and pain in his lower abdomen and both legs for the last week. His medical history only comprised recurrent UTIs. Eighteen days before presentation, he underwent a 180-Watt (W) potassium titanyl phosphate laser PVP of the prostate because of BOO with a prostatic volume of 90 millilitres. Preoperative urine culture was positive for Staphylococcus aureus, susceptible to cotrimoxazole, which was used preoperatively. Upon presentation, he was unable to stand due to intractable pain. There were no other symptoms, specifically no pain associated with urine voiding.
At physical examination we saw an acutely ill patient with a fever of 39.8 degrees Celsius, a tachycardia of 145 beats per minute, and remarkable erythema of the medial side of the right upper leg without sharp borders, accompanied by oedema and tenderness. To a lesser extent, there also was erythema on the medial side of the left upper leg.
Ancillary investigations showed a sharply elevated C-reactive protein (433 milligrams per litre), leucocytosis (15.1 x 109 per litre) and normocytic anaemia. Renal function was impaired. There were no signs of urinary retention as tested with a bladder scan.
Cefuroxime was started and switched to flucloxacillin after blood and urine cultures both became positive for Staphylococcus aureus. 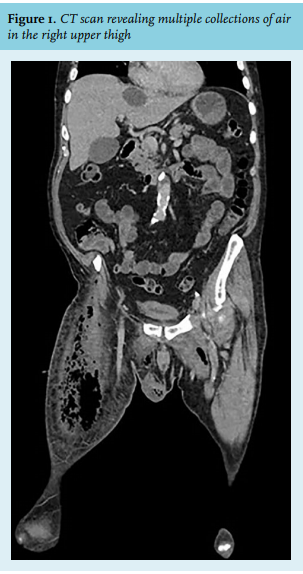 Because of persisting fever and extremely painful progression of swelling despite antibiotic therapy, a computed tomography scan was performed, showing multiple gas collections in the subcutis and muscles of the right upper leg, as well as in the abdominal wall, the left medial upper leg, and the scrotum (figure 1), which did not merge with the prostate. Nor were there clear signs of osteitis pubis. The patient was admitted to the intensive care unit after an emergency fasciotomy with drainage of a large volume of pus from different pockets in both legs. There was no tissue necrosis. New collections of pus were drained in several re-explorations. Transoesophageal echocardiography ruled out endocarditis as a possible dissemination of Staphylococcus aureus bacteraemia. Repeat blood cultures eight days after admission were negative. Considering that the fever started one week before presentation, a bacteraemia duration of 15 days can be assumed.
A postoperatively-placed vacuum assisted closure system elicited leakage of clear fluid from the right groin with a high concentration of creatinine, consistent with urine. Thus, a prostatic fistula leading to an urinoma was thought to be the underlying cause of his soft tissue infection, despite the lack of a visible fistula on cystoscopic evaluation. Leakage continued after placement of a transurethral and suprapubic urine catheter, causing a new abscess in the right upper thigh, necessitating insertion of a bilateral nephrostomy drain in order to divert urine away from the bladder. The fasciotomy incisions were eventually closed and a subcutaneous drain was left behind. Intravenous antibiotics were continued.
The clinical course was further complicated by two readmissions to the intensive care unit because of persistent respiratory failure due to aspiration pneumonia secondary to ventilation-associated vocal cord paresis. The patient was also in need of temporary continuous renal replacement therapy because of acute kidney failure due to sepsis.
The nephrostomy drains were removed after five weeks to restart urine flow through the transurethral and suprapubic catheters. There was no new leakage of urine through the wounds of the right upper thigh and the transurethral catheter was removed.
After an admission of 113 days, the patient was discharged to a nursing home for intensive rehabilitation and speech therapy. Finally, the suprapubic catheter was removed in the out-patient setting on day 139 after his original admission.


DISCUSSION
Recent literature demonstrated that PVP was associated with faster removal of urinary catheter and shorter hospital admission, whereas other complications rates were similar for TURP and PVP.5 Compared to TURP, greater reduction of prostatic volume can be achieved with PVP, hence making the latter a better choice for BOO with a larger prostatic volume. Post-procedural UTIs are merely caused by Gram-negative bacteria (75%), mostly E. coli.6 Single-dose preoperative antibiotic prophylaxis results in reduction of bacteriuria, UTIs and bacteraemia.7 A three-day antibiotic regime can possibly further reduce this risk and a trial is currently being conducted to assess this potential benefit.8 A less common complication of PVP includes capsular perforation, ranging from 1% to 9% with increasing power from 80 W to 180 W,9 compared to 4.0% with TURP.10,11 Use of 180-W laser is restricted to large bilateral adenoma and is discouraged close to the bladder neck and in the ventral prostate because of increased tissue vulnerability and close vicinity to the os pubis.12 The complication presented here is most likely due to such perforation, which expanded secondary to local prostatic infection and soft tissue infection of the right upper thigh with S. aureus bacteraemia. One case series reported eight patients with prostatic fistula presenting with antalgic gait due to pain in the urogenital region; osteitis pubis was diagnosed in three patients.13 Another case series reported three cases of osteomyelitis pubis with positive cultures of the bone.14 One case report described a patient with bilateral thigh urinomas due to prostatic fistula after PVP, similar to the present case.15 Although PVP has been proven non-inferior to TURP in patients with BOO, we presented a very rare but serious and life-threating infectious complication that urologists and infectious diseases specialists should be aware of.