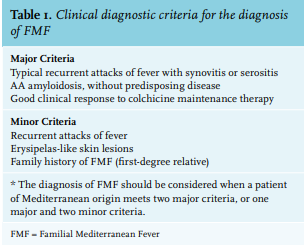 Familial Mediterranean Fever (FMF) is the earliest described and most prevalent hereditary autoinflammatory disease, first described in 1945.1,2 It is usually inherited as an autosomal recessive trait, but rare cases of dominant transmission have been described in patients with the M694V mutation. The FMF gene, MEFV, is located on chromosome 16p13.3, coding for the protein pyrin.3,4 Its clinical presentation may be infrequent in non-Mediterranean countries, leading to delay in diagnosis and treatment. Characteristically, patients suffer from recurrent self-limiting attacks of fever and pain caused by pleuritis, peritonitis, arthritis, or erysipelas-like skin lesions.5,6 The clinical diagnostic criteria are derived from a study at the Tel-Hashomer Medical Centre in Israel.7 The diagnosis of FMF should be considered when a patient of Mediterranean origin meets two major criteria, or one major and two minor criteria (table 1).

As the name suggests, FMF is most prevalent in populations originating from the Mediterranean region: Sephardic Jews, Armenians, Arabs, and Turks.5, 8-14 In these populations, the prevalence is estimated at around 100-400 per 100,000 inhabitants. Due to extensive immigration in the 20th century, FMF is also reported in non-Mediterranean regions. For example, Germany, Italia, Czech Republic, and Japan reported patients with this auto-inflammatory disorder.15-19 Except for few case reports, FMF is not well documented in the Netherlands.20-23 Approximately 800,000 migrants, originally coming from areas where FMF is endemic, are living in the Netherlands. The majority of them are living in cities such as Amsterdam.20
The objective of this retrospective study was to describe FMF patients in Amsterdam, focusing on clinical, demographic, and genetic characteristics in a population of different ancestries. A comparison was made with FMF patients living around both Mediterranean and non-Mediterranean regions based on previous reports.

Study design
Medical records of 53 patients from 1990 until 2012 in a teaching hospital, Onze Lieve Vrouwe Gasthuis (OLVG)-West in Amsterdam, were retrospectively studied.

Case definition
The inclusion criteria were paediatric or adult patients who met the clinical diagnostic criteria from the Tel-Hashomer study.7 For each patient, the following clinical, demographic, and genetic characteristics were extracted from the medical record. Demographic characteristics: gender, age, country of origin, and consanguinity of parents.

Clinical characteristics: age at onset of symptoms and at diagnosis to calculate time from onset of symptoms to diagnosis; clinical features (fever, peritonitis, arthritis, pleuritis, and/or erysipelas-like skin lesions); laboratory findings during acute attacks (C-reactive protein and erythrocyte sedimentation rate); disease-related complications (proteinuria and/or amyloidosis; proteinuria was measured initially through urine dipstick screening, and 24-hour collection was performed in order to quantify proteinuria); abdominal surgery; response of treatment (measured in use of colchicine related to frequency of attacks before and after use); and disease severity score (table 2).24,25 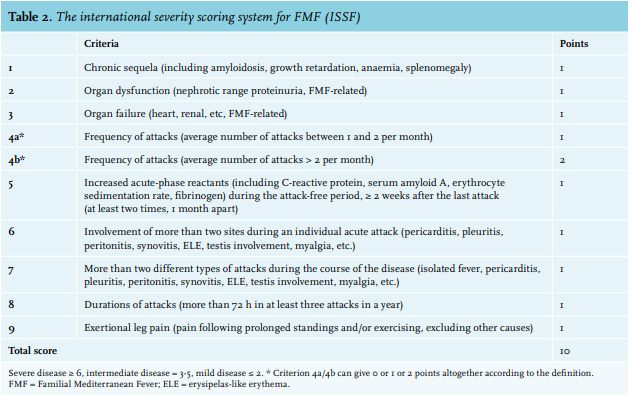 Genetic characteristics: genetic analysis was initially done by screening for known gene mutations in the MEFV gene. Since 2010, mutations in exon 1 until 10, inclusive of intron en exon transitions, were tested. Variants are described as homozygous, heterozygous, or compound heterozygous mutations.


Statistical analysis
Statistical analysis was performed using SPSS 21.0 (SPSS Inc., Chicago, IL). Results are expressed as means ± standard deviation (SD) for continuous variables and frequencies/ rates were measured for discrete variables. Means of the groups were compared with the Student t-test and one-way ANOVA test; a p-value < 0.05 was considered significant. The ethics committee of OLVG-West approved the study. An information letter instructed patients or their parents, in cases of minorities. All of them gave informed consent. 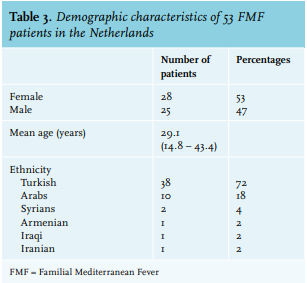 Clinical characteristics
Clinical characteristics are demonstrated in table 4. The mean age at onset of symptoms was 13.8 years. Twenty-three patients (43%) were younger than 10 years at the time of onset of first symptoms, 11 (21%) patients were between 10-19 years, 11 patients (21%) were between 20-29 years, 6 patients (11%) were between 30-39 years, and in 2 (4%) patients, this was unknown. The mean age at diagnosis was 22.0 years and the mean delay to diagnosis was 8.2 years. According to gender, mean age at onset of symptoms was significantly earlier in females (11.6 years) compared to males (16.0 years); p-value 0.000. Mean age at diagnosis was also significantly earlier in females (18.7 years) compared to males (25.1 years); p-value 0.000. However, there was no significant difference in mean time from onset of symptoms to diagnosis between both sexes: 7.1 and 9.1 years, respectively (p-value 0.420).
The main clinical features during acute attacks were abdominal pain reflecting peritonitis (91%) and fever (81%). Less frequent complaints were pain in the hip, knee, or ankle reflecting arthritis (34%), thoracic complaints reflecting pleuritis (34%), or erysipelas-like skin lesions (2%). Most patients had multiple (two or three) clinical features during acute attacks. Forty-nine patients (93%) experienced the same pattern of clinical features during recurrent attacks.
Inflammatory markers were elevated during attacks: the mean C-reactive protein value and erythrocyte sedimentation rate were 133 mg/l and 37 mm/first hour, respectively. One patient who was 20 years at onset of first symptoms and 26 years at diagnosis with a homozygote M694V mutation, had histologically-proven amyloidosis (kidney biopsy) with proteinuria (5.6 g/24h) as a disease-related complication. One other patient had proteinuria (5.4 g/24h) without histological examination. Seventeen (32%) patients underwent abdominal surgery, because there was a suspicion of appendicitis, cholecystitis, or adnexitis and the diagnosis of FMF was not considered. Pathological examination showed no evidence of infectious inflammation in all of these cases.
Most patients used colchicine 0.5mg once or twice a day (n = 15, 31% in both groups). In four patients (8%), no treatment was given, either because the attacks were infrequent (one patient) or because the patients refused treatment (three patients). Before treatment, most patients had multiple monthly attacks (n = 36, 75%). The use of colchicine reduced this frequency; for 28 patients (58%), the attack rate was reduced to several times a year, and for 11 patients (23%) to less than once a year. Nevertheless, nine patients (19%) were unresponsive to colchicine treatment.
Based on the internationally accepted disease severity score for FMF,23,24 most of the patients classified their disease as mild (n = 22, 42%). 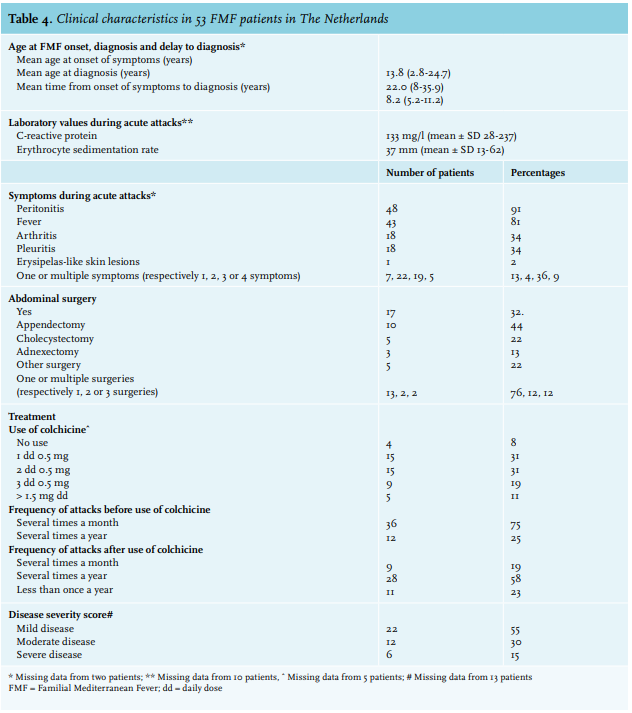 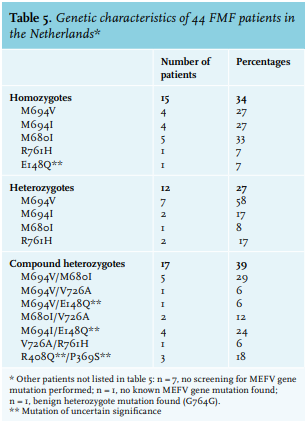