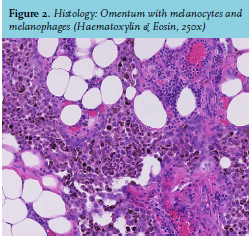 Histological examination after surgery demonstrated metastatic melanoma in all specimens (see figure 2). No primary melanoma was found after dermatological consultation. Next generation sequencing showed an NRAS exon 3 mutation. NRAS mutant melanomas can be of cutaneous or mucosal origin and are associated with a poor prognosis.1 No BRAF mutation was present, precluding targeted therapy with BRAF/MEK inhibitors. Because of the extensiveness and aggressive nature of disease, combination immunotherapy with ipilimumab and nivolumab was started after surgery. Progressive disease was identified at 12 weeks after the start of treatment by CT scan and confirmed six weeks later by a second CT scan; immunotherapy was then stopped. Gradually, the patient’s condition deteriorated, prohibiting further study treatment. She died within eight months after first presentation.
Melanoma can originate in the skin, mucosa, or uvea. Metastases can appear in any organ, but are not commonly seen in the ovaries.2 Even though patients dying of metastatic melanoma have ovarian involvement at autopsy in approximately 20% of cases, diagnosis is rarely made during lifetime.2 Diffuse melanocytic spread, clinically presenting as melanosis cutis, melanuria, melaloptysis, or black pleural effusion, has been previously reported to be associated with a very poor prognosis.3 Although pathogenesis is not completely understood, phagocytosis of melanin and melanin precursors that are shed by rapidly dividing melanoma cells seem to play an important role. No melanosis cutis was present in this patient.
Checkpoint inhibitors such as ipilimumab and nivolumab can provide durable disease remission and might even cure patients with metastatic melanoma by unleashing the immune system. Although 58% of advanced melanoma patients respond to combination immunotherapy with ipilimumab and nivolumab,4 chances of response are generally lower in patients with aggressive disease and high LDH.
In this patient no primary melanoma was identified, which is not uncommon.5 The primary melanoma may have undergone immune-induced regression or be localized inside the body (e.g. in the case of mucosal melanoma), or the primary melanoma may have been missed or removed without histological examination.

As this case shows, metastatic melanoma can mimic primary ovarian malignancies. However, black discoloration of body fluid should prompt suspicion of metastatic melanoma and often is an ominous sign. Looking back, the diffuse spreading, high tumour load and high LDH levels predicted the poor prognosis of this patient.