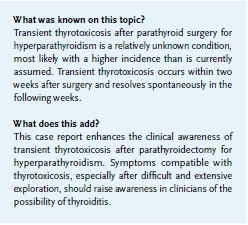 Chronic renal disease could by characterized by the development of hyperparathyroidism. In patients with severe hyperparathyroidism who do not respond to medication, parathyroid surgery is recommended. Post-operative hypocalcaemia and local surgical problems are the most frequent complications and are usually well-anticipated.
In this paper, we report a patient with tertiary hyperparathyroidism, who developed symptomatic transient thyrotoxicosis in the post-operative period after parathyroidectomy. The pathogenesis appeared to be thyroiditis, induced by thyroid surgical manipulation.

A 32-year-old man was hospitalized for planned parathyroidectomy. He suffered from Townes Brock syndrome, a congenital condition associated with kidney hypoplasia, but not from thyroid abnormalities. He had developed severe tertiary hyperparathyroidism (iPTH: 111.6 pmol/l; n = 1.6-6.9 mmol/l) due to chronic renal failure and possibly poor adherence to active vitamin D supplementation. Despite treatment with high dose cinacalcet (90 mg/day), parathyroidectomy was indicated in preparation of pre-emptive kidney transplantation. There was no personal or family history of thyroid disease. Preoperative thyroid function tests were normal. No imaging with iodinated contrast were performed before surgery. A surgical neck exploration was performed with removal of three parathyroid glands. The fourth parathyroid gland was not detected despite thorough exploration and palpation of the operation area. Post-operative nadir serum calcium concentration was 2.01 (n = 2.20-2.60 mmol/l) while albumin level was 29 g/l (n = 35-55 g/l). Calcium suppletion was started as a preventative. The following day, the patient felt restless and noted palpitations. Pain in the neck was 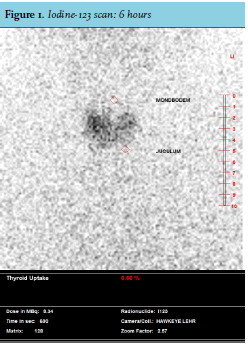 absent. Physical examination demonstrated an agitated patient with a pulse rate of 108 beats/min and a temperature of 36.8 °C. Routine blood analysis showed an increased C-reactive protein (147 mg/l, n = < 10mg/l). No clear source for an infection was found. In addition, the surgical wounds healed well. Further examination showed a thyroidstimulating hormone (TSH) level of 0.4 mU/l (n = 0.3-4.2 mU/l) and a free thyroxine (fT4) level of 64.3 pmol/l (n = 12-24 mU/l) on the third post-operative day. Thirteen days post-operative, a blood test showed a TSH of 0.03 mU/l (n = 0.3-4.2 mU/l) and a fT4 of 46.1 pmol/l (n = 12-24 mU/l). An iodine-123 scan showed a remarkably low uptake of 0.7% after six hours and 1.2% after 24 hours, compatible with thyroiditis. As clear signs of an infectious or autoimmune cause were absent, it was hypothesized that surgical manipulation was responsible for the clinical manifestations. Beta blockade was started and the patient gradually recovered. Thyroid function normalized after six weeks and remained normal during two years of follow-up.

The described patient developed thyrotoxicosis due to thyroiditis after parathyroid surgery. Postparathyroidectomy transient thyrotoxicosis is a relatively unknown condition and not widely acknowledged among parathyroid/endocrinologic surgeons or consulting internists.
Several studies report transient thyrotoxicosis after parathyroid surgery for primary hyperparathyroidism in 20-30% of patients1-5, but the percentage of occurrence after total parathyroidectomy for secondary and tertiary hyperparathyroidism is unknown.
Four cases of acute thyroiditis after parathyroidectomy for secondary or tertiary hyperparathyroidism in chronic renal failure patients are described.3,6,7 All patients had normal preoperative thyroid function tests. In two cases, in which manipulation of the thyroid gland during parathyroidectomy was minimal, the patients developed elevated thyroid hormone levels without typical symptoms.3
In the other two cases, the patients developed symptoms consistent with thyrotoxicosis on the second and third post-operative day. These patients had symptoms such as fever with profuse sweating, restlessness, agitation, intractable nausea, and palpitations. In both patients, thyroid antibodies were negative.6-7 A pertechnetate isotope thyroid scan was performed in one patient and revealed low uptake.7
In two of the four cases, the thyroid hormone levels were followed over time. The maximal increased fT4 and fT3 values occurred at days three to seven post-operatively and returned to normal within 14 days. Their TSH decreased to undetectable values and returned to normal within two to three months.3
Iatrogenic thyroiditis is reported after use of lithium, amiodarone or immunotherapy. In addition, radioiodine ablation, external irradiation and (incidentally after) manipulation of the thyroid gland during operative procedures, or trauma may cause thyroiditis (table 1).4,8 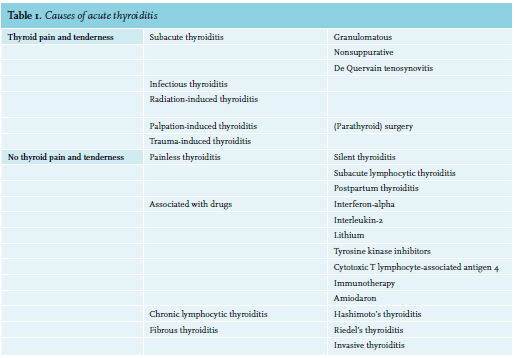 After surgery, a non-thyroidal illness syndrome can be observed. A parallel decrease of TSH and peripheral hormones fT3 and fT4 can be detected. This phenomenon may be induced by an acute phase response.5 Anaesthesia, on the other hand, can cause an elevation of fT4 levels, with a peak in the first hour after induction. Levels normalize within 24 hours post-operatively.9
Trauma and palpation of the thyroid gland may cause a subacute thyroiditis with release of preformed hormone into the circulation and as result development of transient thyrotoxicosis.8 Palpation of the normal thyroid parenchyma causes so-called palpation thyroiditis, a non-specific multifocal granulomatous folliculitis.10-11
The incidence of post-operative thyrotoxicosis seems to be higher after bilateral neck exploration compared to unilateral neck exploration or removal of solitary thyroid adenoma.3 Incidence depends on the degree of exploration, variation in size/shape of the thyroid and amount of intra-operative trauma.3,5
The expected progress of post-operative thyrotoxicosis is an increase of T4 within the first week. Due to a half-life of T4 of one week and resolution after five to six half-life times, persistence of hyperthyroxinaemia can last for up to six weeks after the operation. Spontaneous resolution will therefore occur in most patients within six weeks, confirming manipulation of the thyroid gland as a contributing factor in the transient thyrotoxicosis.4

Thyrotoxicosis may occur after parathyroidectomy. This condition is more likely when extensive palpation and mobilization of the thyroid gland leads to manipulative trauma. In patients with symptoms like tachycardia, agitation, palpitation, and heat-intolerance after parathyroidectomy, post-operative thyroiditis should be included in the differential diagnosis. Symptomatic treatment with beta blockers should be started for temporarily relieve while thyrotoxicosis spontaneously resolves within weeks after surgery.