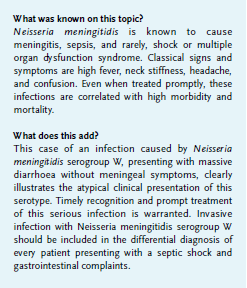 Bacterial meningitis in adults is associated with significant morbidity and mortality. The most common causative agents are Streptococcus pneumoniae and Neisseria meningitidis. The classic clinical presentation of bacterial meningitis includes high fever, neck stiffness, headache and confusion. Even when diagnosed early and treated adequately, morbidity and mortality of bacterial meningitis remain high.1-4
Thirteen subtypes of Neisseria meningitidis have been identified, based on the antigenic structure of their polysaccharide capsule. The most prevalent serogroups in the Netherlands include B, C, W, and Y. Patients with meningitis caused by Neisseria meningitidis serogroup W (MenW) may have an atypical presentation with gastrointestinal complaints including profound vomiting and diarrhoea.5,6
Several countries have reported an increasing incidence of MenW carriage and infections.4,5,7-9 In this case report, we present a patient with a severe infection due to MenW with massive diarrhoea as the main presenting symptom. 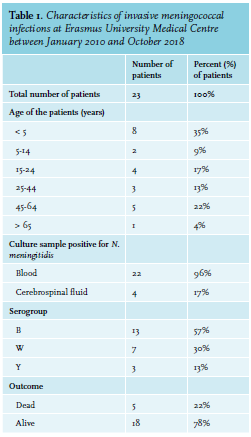 A 23-year-old previously healthy female presented with complaints of nausea, vomiting, profound diarrhoea and generalised pain and cramps in her legs, especially on the soles of her feet, two days prior to her visit. On the second day of complaints, she became seriously ill and was admitted at the emergency department. Physical examination in the emergency department showed a pulse rate of 140 beats per minute, a blood pressure of 93/73 mmHg, a temperature of 35.8 °C, a respiratory rate of 38 breaths per minute, and an oxygen saturation of 95% with 3 liters of oxygen per minute by nasal canula. She was initially lethargic, with a Glasgow Coma Scale score of E4M4V1 without signs of neck stiffness. Her legs were cold and mottled without petechial rash. A chest X-ray showed no abnormalities. Laboratory results revealed lactic acidosis (lactate 9.0 mmol/l, pH 7.04, pO2 4.9 kPa, bicarbonate 10.0 mmol/l), leukopenia (0.8*109/l), elevated CRP (332 mg/l), thrombocytopenia (5*109/l), and signs of disseminated intravascular clotting (DIC; platelet count 8*109/l, PT 29.3 sec., D-dimer 10 mg/l, Fibrinogen 3.8 g/l). The differential diagnosis consisted of gastroenteritis with sepsis (after eating fish soup), atypical meningitis, or a toxic shock syndrome. A lumbar puncture was not performed because of severe thrombocytopenia and, according to the neurologist, her case presentation not being primarily neurological. Antibiotic treatment containing ceftriaxone (2 g IV twice a day) and dexamethasone (10 mg IV four times a day), was switched to a broader regimen consisting of meropenem (2 g IV twice a day), clindamycin (600 mg IV four times a day), and intravenous immunoglobulins (50 g IV once a day) because of deterioration within hours into a septic shock, for which noradrenalin and vasopressin infusion was required.
Ultimately, she developed multiple organ dysfunction syndrome (MODS), with mechanical ventilation because of exhaustion; septic cardiomyopathy, confirmed by transthoracic echocardiography for which inotropic agents were initiated; and fulminant DIC with petechiae on the extremities and haematemesis. In addition, because of acute kidney injury, renal replacement therapy was started. After two days of antibiotic treatment, blood cultures showed N. meningitidis, and subsequently antibiotic therapy was switched to benzylpenicillin (2 million IV six times a day). Our patient stabilised and inotropic agents could be decreased within the next days. She was weaned off the ventilator after a tracheostomy was placed. The antibiotic treatment with benzylpenicillin was continued for a total duration of one week. The Netherlands Reference Laboratory for Bacterial Meningitis determined that the isolated N. meningitidis was serogroup W.
After initial good clinical improvement, our patient unfortunately developed gradual demarcation of the lower extremities due to sepsis and DIC. After an ICU period of 22 days, she was discharged to the general surgery ward for a bilateral lower leg and right thumb amputation. She rehabilitates with orthopaedic prostheses. 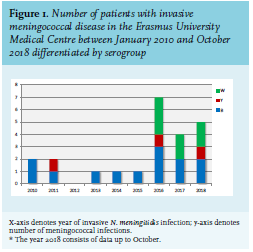 We present a case of a young patient who developed septic shock and MODS due to an invasive infection with Neisseria meningitidis, for which the isolate was determined to belong to serogroup W (MenW). The initial presenting symptom of our patient was massive diarrhoea.
The incidence of invasive MenW infections is increasing worldwide, which is consistent with the increasing numbers in our academic hospital. The characteristics and subtypes of invasive meningococcal disease, defined as N. meningitidis isolated from blood and/or cerebrospinal fluid (CSF) at our medical centre are illustrated in table 1 and figure 1. MenW infections are associated with a high case fatality rate,6 which was also seen in our centre. In the last eight years, 23 patients were identified, of which five patients (22%) died as a result of the infection (serogroup W:2, serogroup B:1, serogroup Y:1).
The introduction of a vaccine against N. meningitidis serogroup C (MenC) in 2002 resulted in a rapid decline of the incidence of MenC in the Netherlands.10 The growing number of MenW infections urges the need for vaccination against MenW. In 2018, the MenC vaccine, as part of the national vaccination program, will be replaced by the quadrivalent MenACWY-vaccine in the Netherlands.11
In summary, Neisseria meningitidis is known for causing sepsis and meningitis. Currently, the incidence of infections due to MenW is increasing in the Netherlands as it is worldwide. This serogroup can present atypically, as this case also illustrates, with massive diarrhea,5,6 and highlights the difficulty of timely recognition of the disease which is pivotal for guidance of prompt treatment. Invasive infection with Neisseria meningitidis serogroup W should be included in the differential diagnosis of every patient presenting with a severe septic shock and gastrointestinal complaints.

We would like to thank Marius Vogel for his contribution with the data collection.