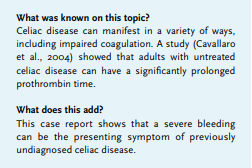 A 47-year old man was admitted to our hospital with new onset macroscopic hematuria. He had no significant medical history, nor did he have any risk factor or family history for bleeding disorders. Our patient reported general discomfort since a few weeks, including some days of diarrhea. Four days prior to hospital admittance, he had been treated with doxycycline for two days for suspected Lyme disease. On physical examination, we observed an underweight man (body mass index 17.9 kg/m2 ). Furthermore, spontaenous hematomas on both feet were observed. Moreover, when removing his watch, another hematoma developed instantly at this site. His urine contained blood and urine analysis showed > 50 erythrocytes per view. The primary serum laboratory results showed a normocytic anemia [hemoglobin 5.5 mmol/l, hematocrit 0,28 l/l, MCV 84 fl], as well as severely prolonged PTT (over 180s) and APTT (104s). His thrombocyte count, creatinine level and haptoglobin were within normal ranges. The primary differential diagnosis included (1) disseminated intravascular coagulation (DIC), (2) coagulation factor deficiency (as a result of exogenous vitamin K antagonist administration, malabsorption, low vitamin K intake or due to the recently administrated antibiotics), (3) acquired factor antibodies and (4) hepatic failure. Additional serum tests showed a normal value of factor 1 and liver tests within the normal range, excluding DIC and liver failure from the differential diagnosis. Second, both primary and late mix tests showed a significant shortening of coagulation time, ruling out direct factor inhibitors. Thus, by exclusion, prolonged coagulation times were the result of a factor deficiency. Additional testing demonstrated an extremely low level of factor VII (2%) and a slightly decreased factor V level (53%). Serum vitamin K was 0.01 nmol/l. Coumarin-derived anticoagulants were not found in our patient’s serum. Extensive additional questioning revealed that our patient had experienced aberrant stool and stomach aches for years. More additional laboratory tests showed decreased levels of vitamin B12 [less than 61 pmol/l], folic acid [6.7 nmol/l] and albumin [30.3 g/l]. As celiac disease is the most common malabsorption disorder, we tested both anti-transglutaminase IgA antibody (over 128.0 U/ml) and deamidated gliadin antibodies (48 U/ml). Celiac disease was confirmed by gastroduodenoscopy with biopsies, which revealed nearly complete villous atrophywith crypt hyperplasia and intra-epithelial lymphocytosis (Modified Marsh Classification III C). The introduction of a gluten-free diet led to full recovery of coagulation and hematuria. Therefore, no additional diagnostic tests were performed. In conclusion, a 47-year old man presented with macroscopic hematuria and spontaneous hematomas due to extremely low levels of vitamin K caused by celiac disease-based malabsorption.

Vitamin K is an essential fat-soluble vitamin. There are two forms of vitamin K. One is present in food and absorbed in the small intestine; the other is of bacterial origin and absorbed in the colon.1 The food-derived vitamin K is protein bound, separated by pancreatic enzymes and solubilized into micelles by bile salts before absorption. Vitamin K is then incorporated into chylomicrons, which migrate via the intestinal lymphatics and the portal system to the liver.2
In hepatic cells, vitamin K is essential for synthesizing coagulation factors. It is an active coenzyme needed for carboxylation of carboxygluatamic acid, which is present in coagulation factors VII, IX, X, and prothrombin. Carboxylation enhances the affinity of these factors for the phospholipids on the platelet surface and thus promotes coagulation. In the presence of a vitamin K deficiency, carboxylation of the abovementioned factors will be limited which causes an increase in coagulation time.2 Among others, vitamin K deficiency can occur as a result of malabsorption.3
Celiac disease is the most common cause of malabsorption in Europe and North America.4 In celiac disease, exposure to dietary gluten causes inflammation of the mucosa, crypt hyperplasia and villous atrophy in the small intestine. Abstention of dietary gluten induces improvement of these aberrancies.5 Usually, celiac disease is diagnosed in patients with diarrhea and weight loss, which is observed in 85% and 57% of celiac patients, respectively.6 To the best of our knowledge, this is the first European case and the second case worldwide, of macroscopic hematuria as the presenting symptom of celiac disease. Of note, one study investigated the prevalence of prolonged PT in adults with untreated coeliac disease.7 From a total of 390 celiac disease patients, 72 patients (18.5%) showed prolonged PT.

Our case shows that severe and potentially life-threatening spontaneous bleeding can be the sole presenting symptom of celiac disease. Most probably, our patient has suffered from malabsorption throughout his life due to celiac disease, which has led to reduced vitamin K uptake in the small intestine. Possibly, the administration of doxycycline disrupted the microbiome in the colon and thus reduced the residual uptake of vitamin K to a critical low level.8 Avoiding dietary gluten led to recovery of the small intestine and improved absorption of vitamin K.

Early recognition of the underlying cause of severe bleeding could prevent undesirable outcomes such as hemorrhagic stroke or gastro-intestinal bleeding. Therefore, in cases of patients with spontaneous bleeding and extended coagulation parameters in accordance with vitamin K deficiency, malabsorption based on celiac disease should be considered.