The "nodding head": a prognostic factor?

To the editor,
Many patients sent to the emergency department for various reasons, undergo a chest X-ray. Patients are sometimes too sick or otherwise unable to stand up straight. In these cases, a so-called “bed photo” is made, and even then, some patients are not able to sit up straight or hold their head straight. During morning rounds this phenomenon was called the “nodding head” and in a clinical setting this could indicate upcoming death.
This observ 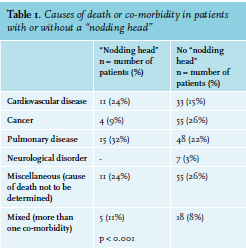 aton was substantiated in a prospectively collected dataset; only patients above the age of 65 were included in this study. A “nodding head” was defined as superposition of the lower jaw over the anterior border of the superior thoracic aperture, defined as the place where the clavicles articulate with the sternum. In 2014, a total of 2653 chest X-rays were performed in the emergency department. Of these, 1399 (52%) X-rays were made of patients over the age of 65 years, and of these, 677 (48%) images were “bed-photos”. Hospital records were studied in order to gather data on morbidity and probable cause of death or co-morbidity that contributed to death. Data on mortality were collected by the end of the year 2015 in order to obtain sufficient follow-up. Overall mortality, as well as 30-day mortality, was studied. The “nodding head” group comprised of 90 patients; 65 patients died (72%), compared to 296 deaths (50%) of the 587 patients without a “nodding head”. This difference is statistically significant (p < 0.0001) (figure 1). Table 1 shows co-morbidity and the disease that most likely lead to death. Patients with a “nodding head” died more often due to pulmonary diseases, while patients with normal head position died more often because of cancer. From this observational study, it can be concluded that a patient with a “nodding head” is in worse clinical condition and is prone for death within the next few months. A “nodding head” could be seen as an additional practical prognostic factor in elderly patients. 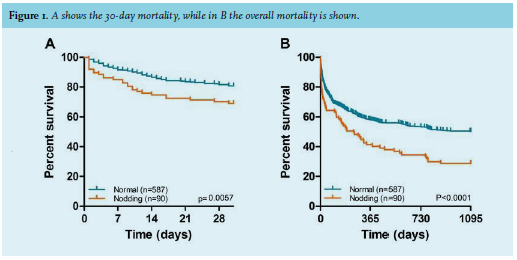