Various international studies have shown that direct oral anticoagulants (DOACs) can provide healthcare benefits for a large number of patients.1-3 In the Netherlands, DOACs are available for the treatment of venous thromboembolism (VTE), stroke prevention in non-valvular atrial fibrillation (NVAF) and as a short-term prophylaxis of VTE after total hip and knee replacement.4 Dabigatran (Pradaxa®), rivaroxaban (Xarelto®), apixaban (Eliquis®) and edoxaban (Lixiana®) are currently registered in the Netherlands and are approved for application in NVAF and VTE patients. Phase 3 clinical trials have shown that DOACs are at least as effective as vitamin K antagonists (VKAs).5-13 DOACs also have significantly better outcomes with regard to intracranial bleeding.14
VKAs require international normalized ratio (INR) monitoring due to unpredictable pharmacokinetics, and are also known for many food and drug interactions. DOACs, on the other hand, have a more direct inhibiting mechanism on the coagulation factors Xa (apixaban, edoxaban and rivaroxaban) or IIa (dabigatran), making INR monitoring unnecessary.4 This, together with fewer food and drug interactions make DOACs a more user-friendly treatment option.
Since the introduction of DOACs, the prescription numbers in the Netherlands are lower when compared to most other European Union (EU) countries. This article highlights the potential health gains in the Netherlands if the use of DOACs were to increase, based on the current international experience with DOACs. Therefore, we will first provide an overview of trends, including scientific, real-life and pharmacoeconomic data on DOAC use for the indication NVAF in the Netherlands.

DOAC use in the Netherlands
In 2012, an advisory report from the Health Council of the Netherlands urged for a well-dosed and conservative introduction of a new class of drugs, DOACs,15 and recommended careful monitoring and suggested registration of bleeding and thrombotic complications. The report also mentioned three barriers for early and broad introduction of DOACs in the Netherlands: 1) lack of an antidote, 2) doubts about adherence and lack of monitoring in cases of overdose, and 3) increased budget impact at DOAC introduction.15 The Health Council’s advice resulted in conservative prescription dispensation and slow increase in use of DOACs. Furthermore – although never mentioned explicitly – the strong established position of regional and hospital-based thrombosis service centers may have played an influential role in the Health Council’s advice. In the Netherlands, we have a unique, very well-organized and specialized Thrombosis Service,16 which monitors all patients using VKAs, including their international normalized ratio (INR), which is regularly measured with subsequent dose adjustment. With the introduction of DOACs, these centers may become redundant, causing unemployment.

Health benefits and patient preference
Clinical research has shown that anticoagulant treatment with DOACs is at least equivalent to standard therapy with VKAs in terms of effectiveness and adverse events;5-13 therefore, DOACs may be a practical and user-friendly alternative treatment for a large group of patients.17,18 Clinical data from 50 trials included in a meta-analysis have illustrated that treatment with DOACs led to significantly better overall outcomes in hemorrhagic side effects compared to VKA treatment.1 A 2015 study by Boom et al. demonstrated that Dutch patients prefer DOAC over VKA treatment, primarily because of a lower risk of hemorrhagic events and non-requirement for INR monitoring.19,20 Despite the benefits of DOAC treatment, it might not be the best choice for every patient. There are limited data concerning vulnerable elderly patients (75+ years of age) and patients with impaired renal function; thus, clinicians should prescribe DOACs for these specific populations with caution.21
Health benefits are usually expressed in Quality-Adjusted Life Years (QALYs) gained, where 1 is equal to perfect health and 0 equals death. Using quality of life outcomes from a study addressing stroke prevention in NVAF patients from a Dutch perspective, we calculated a weighted average health benefit of 0.276 QALYs per patient in favor of DOACs (apixaban, dabigatran, rivaroxaban) compared to VKA therapy.22 The weighted average was calculated by the number of QALYs per patient gained, adjusted by the distribution of DOAC use (apixaban, dabigatran and rivaroxaban) in the Netherlands in 2014.23 Several studies performed by the University of Groningen reported comparable cost-effectiveness between DOACs (dabigatran, rivaroxaban and apixaban) and VKA acenocoumarol in VTE and NVAF patients.24-27 All studies associate DOAC use with potential health benefits, especially in patients with characteristics comparable to the different NVAF and VTE trial populations; elderly patients with impaired renal function should still be treated with caution.

DOAC use: A comparison of the Netherlands to other EU countries
For our current analysis, we compared the Netherlands to Belgium and Germany because of their similar healthcare systems and economies. In 2010, the Global Anticoagulant Registry in the FIELD-Atrial Fibrillation (GARFIELD-AF Registry) was established to gain insight into DOAC use for NVAF in different European countries.28 Comparing Dutch prescription rates to other Western European countries shows a slower uptake of DOAC use in the Netherlands. From 2010 to 2014, the number of DOAC anticoagulated German and Belgian patients in increased from 4.3% and 50.0% to 24.8% and 57.0%, respectively.28 Dabigatran treatment for the indication NVAF received approval in Germany in August 2011; this occured more than a year later in October 2012 in the Netherlands and Belgium, which could explain its higher use in Germany.28 Another reason may be that general practitioners (GPs) in the Netherlands strictly adhere to guidelines, and generally only start prescribing a new drug when it is endorsed by the Dutch College of General Practitioners (Nederlands Huisartsen Genootschap, NHG). For DOACs, this did not occur until late 2016,29 and this ‘waiting’ approach may have further delayed DOAC use.

Potential health gains in the Netherlands
If we assume that the use of DOACs increases to levels comparable to Belgium or Germany, we can estimate possible health gains in Quality Adjusted Life Years (QALYs). We calculated these QALYs for the year 2014 since we based our calculations on prescription numbers in the GARFIELD-AF study, which included numbers updated to 2014. According to the 2014 annual medical report of the Federation of Dutch Thrombosis Service (Federatie van Nederlandse Thrombosediensten), there were a total of 307,067 VKA-treated NVAF patients in the Netherlands.16 Based on ATC codes (internationally accepted Anatomical Chemical Classification), the number of users of apixaban, dabigatran and rivaroxaban in the year 2014 could be identified.23 The potential health gains were calculated by multiplying the aforementioned weighted average of incremental QALYs for NVAF patients when switched from VKA to a DOAC, and we calculated that the number of patients that could have been on a DOAC when using German or Belgium prescription levels.22,28 This number of patients was based on the percentage of NVAF patients on DOACs in Germany and Belgium multiplied by the Dutch NVAF population in 2014. With these calculations, we conclude that an increase in DOACs prescriptions to German or Belgian levels would have led to 50,242 (+ 14.3%) or 163,376 (+ 46.5%) additional DOAC users, corresponding with 13,876 to 45,121 QALYs gained.
In addition to the increase in quality of life, DOAC therapy is associated with higher costs compared to VKA. The Health Council of the Netherlands reported an incremental cost-effectiveness ratio (ICER) of € 12,000/QALY for the introduction of DOACs.30 According to this report, the additional costs related to the possible health gains would have been € 167 to € 541 million. Of note, ICERs are calculated over a patient’s lifetime and QALY gains and accordingly, costs are not reached within this one year.

Current situation
Recent Dutch data from the Foundation for Pharmaceutical Statistics (Stichting Farmaceutische Kengetalien, SFK) showed a 75% increase of DOAC prescriptions in the year 2016 compared to the year before (figure 1).31 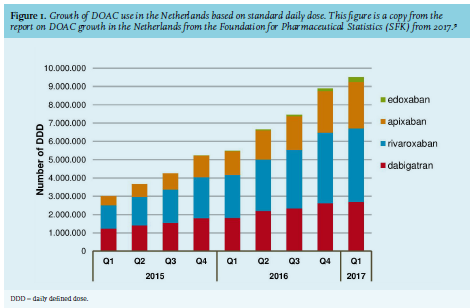 The number of patients on VKAs has declined from 465,000 to 440,000 users (-9%) between the years 2015 and 2016.32 Based on these statistics, we calculated that by the end of 2016, approximately 26% of all anticoagulated patients in the Netherlands received a DOAC. This might be explained by the update of the European Society of Cardiology (ESC) for NVAF and American College of Chest Physicians CHEST Guidelines for VTE in 2016, in which new patients are recommended to start with a DOAC.33-35 In the same year, the Dutch Association for Internal Medicine (Nederlandse Internisten Vereniging) published their new thromboprophylaxis guideline, which positions DOACs over VKA for the treatment of VTE.36 Moreover, the NHG Guidelines stated in 2016 that VKAs are equal to DOACs.29 Although guidelines are more positive towards DOAC treatment, there are still some unaddressed clinical issues that need to be clarified. With regard to these issues, a branch of the ESC, the European Heart Rhythm Association (EHRA) published – at the request of clinicians – a practical guide with answers to specific clinical questions on the use of DOACs in patients with NVAF for example, how to deal with DOACs in the perioperative period.34 An article by Camm et al. discusses the implementation of these ESC guidelines in practice,37 which might also help clinicians optimize DOAC treatment strategies. In addition to guideline adaption, there are more explanations for the increased prescription numbers, for example the positive results of real world data and studies on effectiveness, safety and adherence in more specific populations such as the elderly and patients with impaired renal function.38-41 Recently, the DUTCH-AF registry was established to provide more information on these specific populations in the Netherlands.42-43 The project is an intensive collaboration between cardiologists, GPs, internists and neurologists, and aims to provide insight into daily practice DOAC use in atrial fibrillation (AF) patients. Information on effectiveness, safety and adherence in specific patient populations can be used to optimize the anticoagulation treatment in AF patients.
Furthermore, the development of antidotes and more experience and guidance on how to deal with DOACs in specific clinical situations for example, different types of surgery and interventions, may have contributed to increased prescription numbers.34 The antidote for dabigatran, idarucizumab, has recently been introduced on the market, while andexanet alfa, used to reverse factor Xa inhibition (by rivaroxaban, apixaban, edoxaban or enoxaparin), is currently being studied in a phase 3b/4 clinical trial, The Andexanet Alfa, a Novel Antidote to the Anticoagulation Effects of FXA Inhibitors (ANNEXA-4).44-45


CONCLUSION
DOACs are now well-established alternatives to VKA for anticoagulation treatment in NVAF and VTE patients. However, the use of DOACs in the Netherlands is relatively low compared to various neighboring countries such as Germany and Belgium. Currently, prescription numbers are increasing, but more supportive data on real world effectiveness, safety and adherence in more specific patient populations is needed to help further increase this number. We calculated that increasing the use of DOACs in the Netherlands up to 2014 German and Belgian levels could have led up to 50,242 (+ 14.3%) or 163,376 (+ 46.5%) additional DOAC users, corresponding with 13,876 to 45,121 QALYs gained, respectively.