In healthcare, a certain level of confidence is necessary to make decisions. However, most beliefs are distorted by deep-seated overconfidence. Previous studies have assessed the level of overconfidence across industries and shown how workers are affected by it.1 As overconfidence is a cognitive bias that hampers making appropriate decisions and potentially puts the patient at risk, we investigated whether physicians are also prone to overconfidence.
The same holds true for anchoring. Anchoring is the cognitive bias which results from the tendency to rely too heavily on the first piece of information a person receives when making a judgement. The information anchors in your mind and influences your judgement. We hypothesized that physicians suffer from cognitive biases of overconfidence and anchoring.
To test this hypothesis, we applied a previously validated “Confidence Quiz” among healthcare practitioners.1

We used a confidence quiz to assess the level of overconfidence among physicians. Physicians were recruited after six consecutive workshops on leadership. Participants were asked to simply provide a low guess and a high guess for each of the 10 questions in the quiz (table 1), to indicate that they were 90% sure the true value would lie between the guesses. Hence, participants needed to provide answers so that nine out of 10 answers would be within their low and high guess interval. Of note, to assess your own confidence, please complete the quiz. The answers can be found in the appendix (the questions and answers have been updated for the year 2017). To investigate the effect of anchoring, one question (number 7) was introduced with either low, normal or high information. The question asked “how many passengers have died worldwide due to a commercial airplane accident in the previous 5 years (2013-2017)?” The question was introduced with option A (high anchoring): “On March 8th 2014 239 passengers died in the crash of flight Malaysia Airlines”; or B (normal anchoring): “On December 28th 2014 162 passengers died in the crash of AirAsia”; or C (low anchoring): “On February 16th 2014 18 passengers died in the crash of Nepal Airlines”.
All answers were filled in anonymously. Only answer sheets that were completed were included in the analysis. All anonymous data were extracted and processed by two independent researchers using the statistical software R. The responses of the numerical questions are expressed as mean ± standard deviation (SD). We compared groups with Wilcoxon test (nonparametric statistics). For multiple groups (n = 3) we used the Kruskal Wallis test.

Overconfidence
None of the 261 respondents achieved a 90% confidence score on the quiz (table 2). The reported confidence was around 25%, with intensive care and anesthesiology backgrounds resulting in higher confidence (35%). No effect was seen regarding level of experience, gender or age.

To our knowledge, this is the first assessment of the level of overconfidence among physicians. All participating physicians overestimated their accuracy and were prone to over-precision. Physicians rank in the same range of overconfidence as advertisers, computer specialists and security analysts. None of the participants scored a correct 90% in the 10-question quiz, compatible with the less than 1% correct confident score reported in the literature.1 Previous studies in medicine have mostly looked at diagnostic error rates compared with self-reported confidence.2 Of interest, in a vignette study, self-reported confidence levels were around 70%.3 We show that the level of overconfidence is much higher than a physician’s own belief.
We could not find large differences in personal characteristics or specialty training. Because internal medicine residents were overrepresented, differences could have been blurred in our study. Previous studies however have also shown that confidence or recognition of uncertainty do vary with physician experience.2,4
Overconfidence is caused by various biases or heuristics (mental shortcuts), especially the availability heuristic. In general, our decision system benefits from heuristics to find solutions when faced with complex problems or incomplete information, but in certain cases, they lead to systematic errors or cognitive biases. We specifically tested the anchoring phenomenon, a form of availability bias. Numerical information in the quiz allowed the participants to adjust their estimates accordingly, thereby demonstrating the effect of anchoring. Mamede et al. has shown before that an availability bias may occur in diagnosis as a consequence of recent experiences with similar cases.5 Anchoring may lead to premature closure in the diagnostic process.
In summary, this study shows that physicians are highly susceptible to overconfidence and anchoring. Overconfidence may put patients at risk by influencing reasoning and decision making. Therefore, we believe it is important for physicians to become aware of this highly prevalent cognitive bias. Taking the Confidence Quiz can be a first step in creating this awareness. 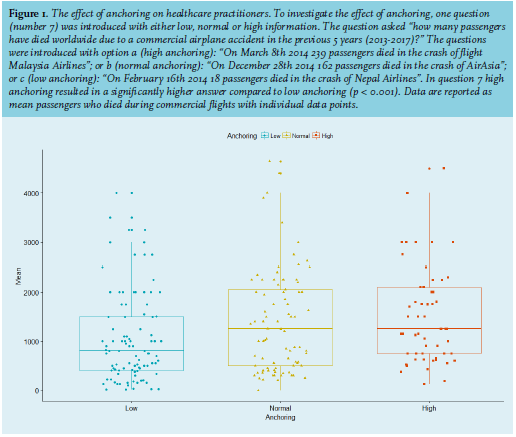