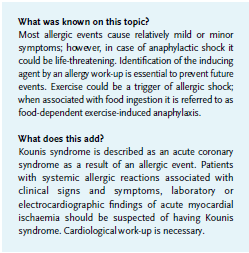 Exercise-induced anaphylaxis (EIA) is a rare condition in which an anaphylactic reaction occurs after physical exercise. Symptoms generally occur within 30 minutes, but may develop up to two hours after exposure to the specific trigger. In one-third of cases EIA is associated with cofactors, such as food intake.1 This is known as food-dependent, exercise-induced anaphylaxis (FDEIA). In this uncommon condition an anaphylactic reaction will develop during or shortly after exercise, when a patient has eaten particular food prior to the activity. Exertion or ingestion of the specific food for which the patient is sensitised alone, do not cause any symptoms. FDEIA is uncommon but symptoms can be life-threatening.1,2
An acute coronary syndrome can occur as a result of an anaphylactic reaction: allergic myocardial infarction, referred to as Kounis syndrome.2 A concurrence of acute coronary syndrome and anaphylaxis is rarely described but recognition is important in treatment. We present a case of wheat-dependent exercise-induced anaphylaxis (WDEIA) with secondary suspicion of Kounis syndrome.

A 49-year-old male without a history of cardiovascular disease presented to our emergency department with an anaphylactic shock after physical exercise. After warming-up the patient developed urticaria on his chest and arms, abdominal pain, vomiting and diarrhoea. An ambulance was called and after arriving the patient’s clinical status deteriorated. He developed angio-oedema and collapsed. The patient’s vital signs included an oxygen saturation 88% on room air, and a blood pressure 92/55 mmHg. Epinephrine and clemastine were administered. An ECG showed incomplete right bundle branch block with mild elevated ST segments without reciprocal ST depression. 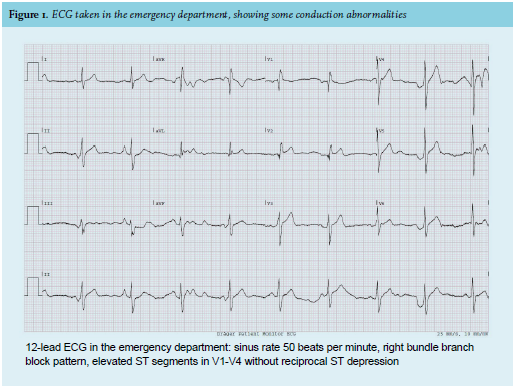 At the emergency department, the patient kept vomiting and the urticaria did not disappear. The oxygen saturation was 96% with 15 litres of oxygen and the blood pressure normalised. There was no medical history of allergy. A detailed anamnesis could not reveal any potential causative trigger or allergen for this anaphylactic reaction. The clue that eventually led to the diagnosis of FDEIA came from the patient who remembered recently having a previous reaction with urticaria during a strenuous cycling trip.
The patient was stabilised with intravenous fluid therapy and antiemetic drugs. Cardiac biomarkers were measured because the prehospital ECG showed ST elevation in V2-V4, suggesting myocardial ischaemia. Unfortunately, this ECG is not available. The ECG taken in the emergency department (figure 1) showed some conduction abnormalities. There were no dynamic ST segment and T wave changes. Echocardiography performed at the bedside did not show any wall motion abnormalities. Laboratory testing showed high-sensitivity troponin T at 15 ng/l (normal range < 14 ng/l; after one hour 73 ng/l). Creatine kinase-MB was 3 μg/l (after one hour 3.7 μg/l), lactate 7.3 mmol/l (after one hour: 1.6 mmol/l). The level of serum tryptase 5.5 hours after onset of symptoms was 5.1 μg/l (normal range < 11.4 μg/l). Elevated serum tryptase levels could be caused temporarily by mast cell activation as in allergic reactions, or sustained elevated levels by mast cell diseases such as mastocytosis. In case of an allergic reaction, levels fall rapidly and are normalised three hours after the onset of the allergic symptoms.

Food-dependent exercise-induced anaphylaxis
EIA frequently needs cofactors to provoke an allergic reaction. Known cofactors that should be inquired about are: food intake, alcohol, medication (e.g. NSAIDs), temperature, and menstruation cycle.1,3 FDEIA will develop during or shortly after exercise when a patient has ingested a specific food for which he is sensitised up to a few hours prior to exercise. Sometimes, more cofactors are needed for a reaction. A detailed anamnesis is mandatory for the right evaluation and diagnosis.
Sensitisations tests, such as skin testing or food-specific IgE, should be performed to identify potential allergens. A challenge test could confirm the diagnosis but is challenging because of high false-negative results. The procedure is not standardised and does not replicate daily life. Without the right diagnosis, the patient runs the risk of a potential life-threatening reaction.1,3
In our patient we suspected exercise-induced anaphylaxis provoked by wheat (WDEIA) because he ate wheat before this anaphylaxis and the previous cycling trip when he developed urticaria. IgE against omega-5 gliadin can confirm WDEIA. Omega-5 gliadin is one of the most common allergens involved in WDEIA; approximately 80% of the patients have IgE reacting to omega-5 gliadin.4
In our patient, an omega-5 gliadin sensitisation was found (5.23 kU/l), and a food-exercise challenge test was planned. However, our patient already challenged himself accidentally by eating bread followed by dancing before his appointment in the outpatient clinic. This was followed by allergic symptoms (figure 2). Because we had already demonstrated a specific IgE to omega-5 gliadin and the patient had already reacted three times within the same pattern of food ingestion plus exercise, we confirmed the diagnosis of WDEIA without performing a challenge test. He was advised to avoid exercise > 4 hours after ingestion of wheat; an adrenaline auto-injector (AAI) was prescribed and he was instructed on how to use it.
Patients with EIA must always carry an AAI with them and self-administer adrenaline intramuscularly as soon as symptoms occur during exercise, and call for help. We strongly advise to exercise only in the attendance of someone who is familiar with the potential risks of exertion and knows how to use an AAI.1,3,4 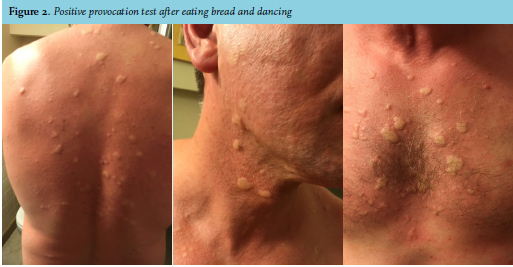 Kounis syndrome
Our patient had abnormal electrocardiogram findings and elevated troponins, both findings could be consistent with an acute coronary syndrome (ACS). Kounis syndrome is defined as the concurrence of ACS (coronary spasm, acute myocardial infarction, and stent thrombosis) in the setting of mast cell and platelet activation from allergic or anaphylactic reactions.2 Coronary vasospasm is the result of a systemic allergy-induced mast cell activation and a release of inflammatory mediators.5 Therefore ACS can occur as a result of the anaphylactic reaction.
Three types of allergy-induced coronary vasospasm are recognised: vasospasm with or without a rise in cardiac biomarkers in patients without coronary artery disease (type I), coronary vasospasm in patients with pre-existing coronary plaques in whom the release of inflammatory mediators may induce plaque erosion or rupture and therefore myocardial ischaemia (type II) or even stent thrombosis as a result of the induced vasospasm (type III). If patients have allergic symptoms accompanied with cardiac symptoms, such as chest pain, Kounis syndrome should be considered. It is important to recognise and distinguish Kounis syndrome from normal ACS because the identification of the allergic trigger could prevent recurrences and the approach to treatment is different. In case of anaphylaxis, it is important to recognise Kounis syndrome because underlying coronary artery disease must be ruled out. The combination of allergic and cardiac symptoms should trigger physicians to perform acute accessory cardiac evaluation including biomarkers (troponins, CK-MB), electrocardiography (ST-T segment changes) and echocardiography (regional wall motion abnormalities). An urgent coronary angiogram can be considered to distinguish between type I and II. During follow-up patients should be monitored for underlying coronary artery disease. Cardiac magnetic resonance imaging and myocardial scintigraphy can help to confirm the diagnosis.5-7
Treatment of Kounis syndrome could be challenging because of the concurrent allergic and cardiac symptoms. Supplemental treatment includes antihistamines, corticosteroids, and epinephrine. Coronary artery vasodilators, such as nitrates, need to be considered first but should be avoided in case of anaphylaxis, because it causes hypotension. However, when blood pressure is satisfactory, sublingual or even intravenous nitroglycerin seems reasonable and safe.6 In a type I variant, treatment of the anaphylactic reaction alone with antihistamines and corticosteroids can resolve the acute coronary symptoms. In case of myocardial infarction (type II) revascularisation is the preferred emergency reperfusion strategy. Remember that epinephrine increases the heart rate and blood pressure and therefore oxygen demand, and this may worsen ischaemia in patients with coronary vasospasm. Besides, coronary artery vasospasm can also be induced by epinephrine when administered in acute anaphylaxis.2,5 Be aware that opiates, given to relieve stress and chest pain, increase mast cell degranulation and vasodilatation and thus may worsen anaphylaxis and coronary vasospasm. Therefore, we would suggest to avoid the use of morphine. Fentanyl is preferable because it shows only a slight activation of mast cells.6
After a short admission to the hospital, our patient was discharged home safely to be followed up closely as an outpatient. Cardiac magnetic resonance imaging did not reveal subsequent coronary artery disease.

Both described diagnoses are rare but should be recognised by physicians, especially those specialised in acute care.
In case of anaphylaxis, physicians should be motivated to search for the causative allergen. Exercise, with or without cofactors, could be a specific trigger for serious allergic insults. Finding the allergen helps patients to avoid specific triggers and is the best prevention of life-threatening situations. Kounis syndrome is the association of an acute coronary syndrome with anaphylaxis. Physicians should be aware when a patient presents with both allergic and heart symptoms. The allergic trigger could be the cause of the cardiac symptoms in case of Kounis syndrome. An allergy work-up and additional testing for underlying coronary artery disease should follow.


DISCLOSURES
All authors declare no conflict of interest. No funding or financial support was received.