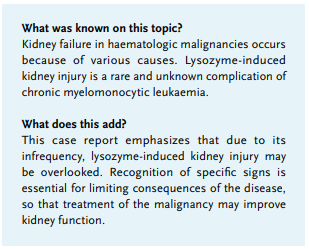 In patients with haematologic malignancies, acute and chronic kidney failure may be caused by tumour lysis syndrome, leukaemic invasion of the kidney, urethral obstruction, chemotherapy-induced toxicity or paraproteininduced disease (table 1). Fewer, and therefore infrequently recognised, causes of malignancy-associated kidney disease have also been described.1,2 We present a patient with chronic myelomonocytic leukaemia (CMML) who developed progressive kidney failure. A kidney biopsy raised the suspicion of a rare complication of CMML, which was confirmed by additional investigation.


CASE REPORT
A 78-year-old man, with diabetes type 2 and narcolepsy, presented in 2014 at our outpatient department with progressive kidney failure. In 2012, he was diagnosed with CMML, which required no treatment. However, since that time, his kidney function deteriorated (figure 1). The patient was prescribed dexamphetamine to treat narcolepsy, and his other medications included metformin, glimepiride and lisinopril. Family members had no kidney diseases. His blood pressure was 143/78 mmHg and physical examination was unremarkable. Laboratory investigation showed the following 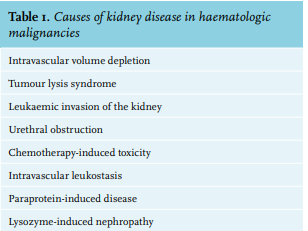 Diagnostic focus and assessment
A kidney biopsy was performed because there was no explanation for the progressive renal failure (eGFR slope -10ml/min/1.73 m2 /year). Microscopy showed subcapsular cortex with approximately six glomeruli, half of which were globally sclerotic. Remaining glomeruli showed no abnormalities. There were areas of interstitial fibrosis/ tubular atrophy. Non-atrophic proximal tubules showed a massive accu

mulation of eosinophilic droplets (figure 2A) which, when observed with electron microscopy, resembled lysozymes (figure 2B). Immunoperoxidase staining for muramidase confirmed accumulation of lysozyme in the proximal tubules (figure 2C). This muramidase staining is not usually evident on renal biopsy: note the difference with a biopsy of another patient with only weak staining of muramidase (figure 2D). Routine immunofluorescence was negative, ruling out paraprotein-related kidney disease. The biopsy findings with tubular lysosomal structures were suggestive for renal failure caused by lysozyme. To support this hypothesis, serum lysozyme concentration was determined and shown to be elevated to 47.5 mg/l (normal range 10-17 mg/l). Based on the above, we made a diagnosis of lysozyme-associated renal failure due to CMML.

Follow up and outcomes
The advanced renal failure and elderly age of our patient discouraged us from starting systemic CMML treatment, in addition to low success rate of CMML treatment and its considerable side effects. Although we didn’t start systemic CMML treatment, we did focus on conservative management of his chronic kidney failure to prevent further damage. Two years later, the patient died of an unknown cause; the last measured eGFR was 16 ml/ min/1.73m2. 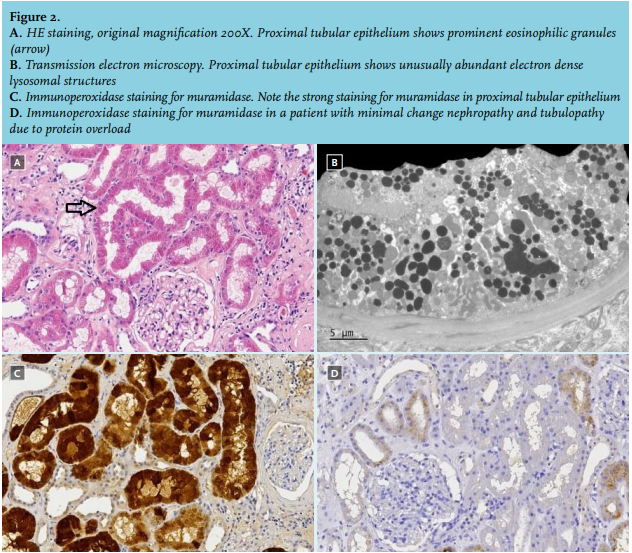 Lysozyme, also called muramidase, is a basic, cationic protein, primarily produced by monocytes and macrophages.2 It is part of the innate immune system and contributes to hydrolysis of the Gram-positive bacterial cell wall, causing lysis of bacteria. It is known that human tears, saliva, sputum and nasal secretions contain high concentrations of lysozyme.3 Normally, lysozyme is reabsorbed in the proximal tubules, where its concentration in the cortex may be 10-25 times greater than in the medulla. It is generally agreed that high concentrations of lysozyme can damage the proximal tubular cells, ultimately leading to tubular necrosis, tubular atrophy and interstitial fibrosis. Rat studies have shown that accumulation of lysozyme droplets in the proximal tubulus was associated with tubular damage.4 Histological changes (hyaline droplets in the proximal tubulus cells) have also been correlated with renal impairment in clinical cases.5 Examples of indications of lysozyme-induced tubular damage include an increased urinary alfa-1-microglobulin/ creatinine ratio or signs of Fanconi syndrome (glucosuria, low serum phosphate, metabolic acidosis).
An increased serum lysozyme level can be found in various diseases including hematologic malignancies, generalized carcinomatosis and typhoid fever (table 2). Sarcoidosis is another disease known for its elevated lysozyme levels, however this is currently not used as a diagnostic parameter.1,6 In addition to tubular damage caused by increased lysozyme levels, renal failure can also be caused by lysozyme amyloidosis. This is a rare form of systemic amyloidosis, causing a heterogenous range of symptoms (GI-haemorrhage, hepatic rupture, sicca syndrome, haemorrhagic skin lesions, lymphadenopathy and renal failure). It is important to distinguish between both forms of amyloidosis because there are no indications for chemotherapy treatment in lysozyme amyloidosis.7
Previous investigations performed by Osserman and Lawlor showed that serum lysozyme concentrations ranged from 40-150 mg/l in patients with monocytic leukaemias, whereas in control patients, serum contained approximately 7 mg/l of lysozyme. The increased filtration of lysozyme exceeds the reabsorptive capacity of the tubules, thus resulting in increased excretion of lysozyme in the urine, as demonstrated in patients with leukaemia.3
These observations were confirmed by Pruzanksi and Platts, who found elevated serum lysozyme concentrations in all patients during the active phase of the monoblastic and myelomonocytic leukaemia.5 Both studies suggest a strong relation between the elevated concentration lysozyme in serum and urine and the occurrence of kidney damage. It seems evident that patients with mono- and myelomonocytic leukaemia almost invariably develop prominent proteinuria. Finally, azotemia develops in approximately 50% of all cases.5
Of note, the presence of lysozyme can be suspected when comparing urine albumin and urine total protein concentration, as lysozyme-induced nephropathy typically causes a nonalbumin proteinuria. In glomerular diseases, urine albumin comprises 60-70% of urine protein, whereas in patients with lysozymuria, albumin contributes < 25% to total protein. However, significant albuminuria may be present, due to toxic tubular damage caused by massive lysozyme reabsorption by the proximal tubulus. Thus, disproportionally high urinary protein excretion compared to albumin excretion may indicate lysozyme overproduction, although it is a trigger rather than a sensitive finding for the diagnosis of lysozymeinduced nephropathy. Lysozyme quantifying in urine is not available anymore in the clinical setting.
When diagnosed, a curative treatment for lysozymeinduced kidney damage in CMML is not known, however it is to be expected that treatment of CMML will also result in improved kidney function. Santoriello et al. described a case in which the serum lysozyme levels decreased to within normal ranges four months after CMML treatment was started, although this patient remained dialysisdependent.1 Borges et al. presented a case in which kidney function was ameliorated after treatment of CMML with azacitidine and prednisolone.8
In this case report, we highlight the relationship between CMML and kidney failure other than tumor lysis, because early recognition is essential in preventing further kidney damage. Kidney biopsy and quantifying of lysozyme in the serum are useful diagnostic procedures, once the suspicion of lysozyme toxicity is raised. There are no pharmacological options to solely lower serum lysozyme levels, and this is why the presence of lysozyme-induced nephropathy may be an argument to start CMML treatment in order to prevent progressive renal failure.

Because our patient died before this case report was finished, we could not obtain informed consent.