Urine changing from clear to milky-white 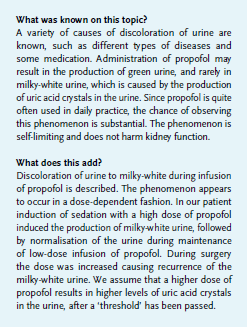 A 22-year-old man presented to the emergency department. He was arrested because of irrational, aggressive behaviour after jumping out of the window of his house. Because of severe agitation an attempt to sedate him with 15 mg midazolam in the ambulance was unsuccessful. His medical history revealed only substance abuse, and no other medication was used.
After admission to the ICU where sedation with propofol was initiated, no abnormalities were found on physical and radiological examination apart from a soft tissue wound with tendon injury to his right wrist. Because substance abuse was suspected, toxicity screening was performed after insertion of a urinary catheter, revealing the presence of amphetamines, benzodiazepines and cannabinoids. Ethanol could not be detected.
Initially, clear yellow urine was drained; however, within 30 minutes after initiation of propofol infusion (160 mg bolus dose and 240 mg/h) the aspect of the urine changed into cloudy, milky-white, yellowish urine (figure 1). The urine was analysed microscopically, showing the presence of vast amounts of uric acid crystals. Serum uric acid concentration was elevated (1.14, normal 0.20-0.42 mmol/l) as was the creatinine kinase concentration (2100 mmol/l). Kidney and liver function was normal.
Within three hours the discoloration disappeared and the urine returned to normal, despite continuation of a low-dose propofol infusion. Ten hours later the patient was transferred to the operating room for surgical repair of his injured tendons. After an extra dose of 160 mg of propofol, and infusion of 400 mg propofol/h, the urine turned milky-white again. After surgery the propofol infusion was stopped and the urine again normalised. The following day the serum uric acid levels returned to normal and no uric acid crystals were detected on urinalysis.

The patient developed milky-white urine after anaesthesia with propofol, which is a rare phenomenon. Other types of discoloration of urine due to propofol anaesthesia have been described such as green, due to its phenol group, or pink.1
The differential diagnosis of discoloration of urine includes a urinary tract infection due to pyuria, increased excretion of phosphate crystals, as occurs in hyperparathyroidism, and the use of drugs (e.g. rifampicin and methylene blue).2 Discoloration due to pyuria was very unlikely, since there were no signs of infection. Moreover, urinalysis did not show any leukocytes and nitrite was negative. Hyperparathyroidism was not present nor were phosphate crystals seen during microscopic analysis.
We assume that the milky-white, cloudy appearance was due to uric acid crystallisation which was confirmed by urinalysis (figure 2).
Propofol is known to be uricosuric.3 It has a structural similarity to probenecid, which competes with uric acid at the anion transport exchanger at the renal tubules, hence inhibiting reabsorption of uricacid.3 Propofol, or any of its metabolites, probably competes at the same anion transporter, inducing excretion of uric acid.3 A number of risk factors are described for uric acid precipitation with propofol,4 such as hyperuricaemia, low urine pH, obesity and low urine volume. Uric acid can precipitate in the presence of an acidic urine pH, which was present in our case with a pH of 5.0. Increasing the urine pH by adding bicarbonate could theoretically cause the uric acid crystals to dissolve, leading to normalisation of the urine.
In addition, our patient had hyperuricaemia, which was probably related to mild rhabdomyolysis (creatinine kinase was initially 2100 mmol/l), as a result of his aggressive behaviour prior to admission. He had a normal urine volume and no obesity.
Remarkably a high dose of propofol twice resulted in milky-white urine, whereas a lower dose did not, thus suggesting that the formation of uric acid crystals is a dose-dependent phenomenon. To our knowledge, this observation has not been described before.
Since propofol is frequently used, the described phenomenon might be observed more often in the future. It is important to realise that this transient phenomenon appears not to be harmful and has no negative consequences for kidney function. Therefore, unnecessary investigations should be avoided.