Adherence to surveillance guidelines for colorectal adenomatous polyps in the elderly

Colorectal cancer is the third most common type of cancer in both women and men in the Netherlands; every year approximately 4500 patients die from this disease.1 There is sufficient evidence that a large number of colorectal cancers develop from adenomatous polyps which slowly progress into adenocarcinomas. The incidence of colorectal cancer is therefore reduced by endoscopic polypectomy.2,3 However, in patients who undergo polypectomy the occurrence of new adenomas is higher than in the general population and the risk of developing colorectal cancer remains higher.4-7 Therefore effective follow-up regimes for identification and removal of premalignant adenomas in these patients are important. Despite clear guideline recommendations concerning surveillance, multiple studies have shown poor adherence as surveillance recommendations after polypectomy are not followed in around 70% of patients of all ages.8-10
Studies that investigated the adherence to surveillance guidelines specifically in elderly patients are scarce. Currently, more than 50% of the patients with colon cancer are over 70 years of age, and due to ageing of the population, the average age at diagnosis of colorectal cancer is rising.11
Furthermore, the risk of developing new adenomas, and also interval carcinomas, increases with age.6,12-14 Thus, adequate surveillance seems particularly important in elderly patients.
On the other hand, there are several arguments to limit surveillance amongst the elderly. Firstly, there is considerable evidence that elderly patients are at a higher risk of developing complications when undergoing a colonoscopy.15-18 A study by Tran et al. showed that among elderly patients undergoing surveillance colonoscopy, there was a relatively high rate of post-procedure hospitalisation, but also a low incidence of finding colorectal cancer.19 Second, elderly patients benefit less from preventive diagnostics, as the estimated time of 10 to 20 years in which an adenoma develops into carcinoma may exceed their remaining life expectancy.16-18,20,21 Risks and benefits should therefore be weighed carefully.
Furthermore, it is important to take cost-effectiveness into account. The Surveillance After Polypectomy study showed that surveillance stops being cost-effective above a certain age, varying from 75 years in low-risk patients to 85 years in high-risk patients.
In this study, we set out to evaluate adherence to surveillance guidelines for elderly patients after polypectomy. The Dutch national guideline that was applicable during the study period recommends cessation of surveillance in patients older than 65 years with only one adenoma in their cumulative history, and in patients over 75 years with only two adenomas.8,16 In patients with a cumulative number of three or more adenomas, it is recommended to continue surveillance ‘as long as the patient’s condition and vitality allows it’. In addition to assessing overall guideline adherence, we wanted to examine the criteria and motivations that were used in decision-making regarding continuation or discontinuation of colonoscopic surveillance.

Study population and data collection
A retrospective study was performed among patients of 70 years or older who underwent a polypectomy at the Diakonessenhuis, a large teaching hospital in Utrecht, the Netherlands, between 2009 and 2011. Patients were identified using the hospital’s pathology registry; all clinically relevant polyps are routinely sent to the pathology laboratory for examination and this registry thus provides a reliable overview of polypectomy patients. Patients were excluded if they had a proven gastrointestinal malignancy, a past history of gastrointestinal malignancies and if the indication for coloscopy was inflammatory bowel disease because there is a different surveillance regime for this category of patients. The medical ethics committee overseeing our hospital provided a written waiver stating that, given the retrospective nature of the study, no formal ethical review was required.

Index colonoscopy
The colonoscopies carried out between 2009 and 2011 in which the first polypectomy was performed – considered the ‘index colonoscopy’ – were used to select our patients. Using the electronic patient charts, the following data were collected from the time of index endoscopy: age, sex, comorbidity, scored using the Charlson comorbidity index, reason for index colonoscopy, number and localisation of removed polyps, number of pathologically-proven adenomas and hyperplastic polyps, number of proximal adenomas, and presence of adenomas or hyperplastic polyps > 1 cm) (table 1).

Patient characteristics
Between 2009 and 2011, a total of 531 patients of 70 years or older underwent a polypectomy with pathology analysis. After exclusion of 113 patients for various reasons (figure 1), 418 patients were included. The patient characteristics are listed in table 1. The median age was 76 (range 70-90) and 48.3% were male (table 1). The Charlson comorbidity index was 0 in 223 patients (53.3%) and ≥ 3 in 138 patients (33.0%). In these 418 patients, all 945 visible polyps were removed during index colonoscopy. Of the polyps examined pathologically, 533 were adenomas and 84 hyperplastic polyps. 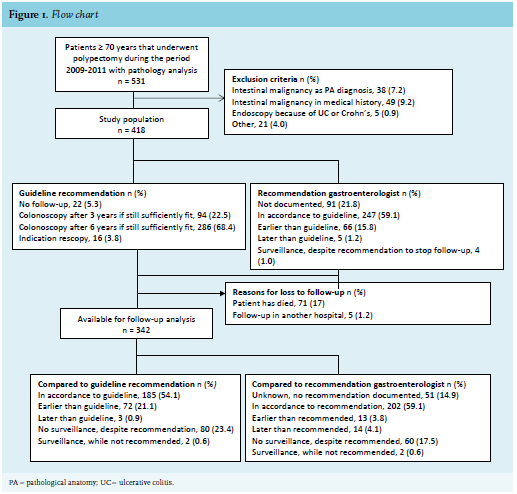 For 51 patients (14.9%), no comparison between actual surveillance and the recommendation of the gastro - enterologist could be made because the latter was not documented.

In our study, there were legitimate reasons to deviate from the guideline (table 2a) for some patients. However, often the reasons for recommending earlier surveillance were factors such as size, number or pathology results of polyps. In these cases, the gastroenterologist might have been unnecessarily defensive, placing elderly patients at risk for complications without clinical benefit and also creating unnecessary healthcare costs.15-19 On the other hand, the new national guideline which was implemented in 2013 has incorporated several independent risk factors for developing colorectal cancer into its surveillance recommendation algorithm; these include the patient’s age, sex and more polyp characteristics, such as location, size and villous or serrated histology classification.24 It is possible that gastroenterologists were already aware of these risk factors, and that this subsequently influenced their choice of surveillance interval.
While timely surveillance is important, we believe that timely cessation of follow-up is just as relevant for elderly patients. In our population, reasons for not performing surveillance colonoscopy were not always well documented. For the majority, no outpatient visit to the hospital was documented at the time the decision to withhold colonoscopy was made; this suggests that this decision was likely to be based on age or earlier documented comorbidity but not necessarily on the patient’s actual health status at the time surveillance colonoscopy was due.
There is general consensus that basing treatment decisions on age alone is insufficient.22 Ageing is a highly individual process, resulting in increasing heterogeneity with increasing age; this heterogeneity extends to remaining life expectancy as well as a patient’s ability to tolerate diagnostic procedures and treatment. Thus, vitality or frailty of a patient is much more relevant to treatment decisions than age itself. Our study shows that documentation of this vitality or frailty was very limited in the period of investigation. There are no validated checklists or tools for gastro-enterologists to measure frailty and vitality as part of the decision-making regarding surveillance colonoscopy. Interestingly, while the new guideline of 2013 addresses additional factors, such as specific polyp characteristics, to guide the timing of surveillance, very little guidance is provided regarding the decision to end follow-up. It is still left to the gastroenterologist’s own subjective judgement. Clearer clinical criteria or a specific tool to define frailty and comorbidity could improve the quality of decision-making. We believe this should be developed, validated and incorporated in future guidelines, so that the decision-making process regarding ending surveillance in elderly patients will become more objective and transparent. In this context, collaboration between gastroenterologists, specialised in intestinal polyps and their treatment, and geriatricians, specialised in assessing ageing and frailty, might be valuable. This has become particularly pertinent with the introduction of the national colon cancer population screening program in the year 2013. This has increased the total number of colonoscopies performed and makes correct and efficient surveillance intervals even more important considering possible unnecessary complications of too frequent surveillance colonoscopies.
To our knowledge, this is the first study specifically addressing surveillance after polypectomy in patients aged 70 years and over. However, this study has some limitations. Inherent to the retrospective design, we could only use the data that were available. In the patient records, data regarding comorbidity, frailty status and the specific reasons for deviating from the guideline were not always documented. In addition, due to insufficient information about previous adenomas and pathology records, we were unable to apply the part of the guideline that justifies stopping surveillance based on cumulative one or two adenomas in patients over 65 and 75 years, respectively.
However, as surveillance was not performed when the guideline advised to continue in only 1.0% of patients, this limitation is unlikely to have significantly affected our findings.

Only in 41% of patients was the gastroenterologist’s recommendation regarding surveillance after polypectomy either absent (21.8%) or not in accordance to the guideline (19.2%). The imminent ageing of Western societies and developments such as the national cancer screening program mean that improving guidance on surveillance decisions will become increasingly important. Future research should focus on developing an evidence-based decision algorithm for elderly patients to support gastroenterologists and patients in the choices regarding cessation of surveillance at a certain level of frailty, comorbidity or remaining life-expectancy.


DISCLOSURES
All authors declare no conflict of interest. No funding or financial support was received.