Ulcerated nodules of the tongue


A 59-year-old white woman was referred to our observation for ulcers of the tongue of two months duration. Her medical history included previous Merkel cells carcinoma of the zygomatic region with lympho-nodal involvement five years earlier, which had been treated with surgery, radiotherapy and chemotherapy, and a diagnosis of systemic sarcoidosis two years later, with sub-chin nodes and pulmonary involvement, the latter left untreated as functionality tests were normal. Intraoral examination showed two ulcerated nodules of the dorsal tongue (figure 1); the lesions were painless, grew slowly, and showed positivity to toluidine-blue vital test. A PET-scan revealed two distinct solid masses of the tongue with increased signal intensity, and some little lymph nodes located at the right mandibular angle. Serum sIL-2R test was not performed. An excisional biopsy of the lesions with histological examination was performed (figure 2). No adjunctive treatment was suggested for the ulcerations.

See page 348 for the answer to this photo quiz. 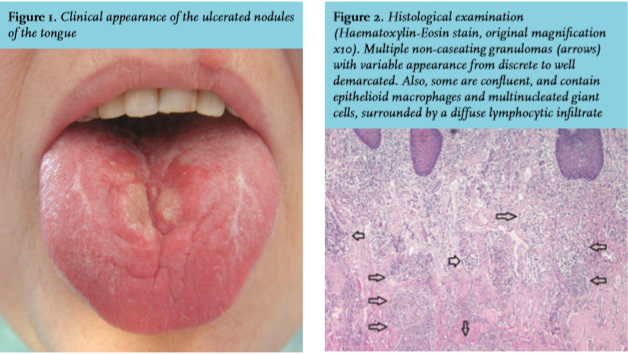