Chronic fatigue syndrome (CFS) is an enigmatic disorder, in which patients suffer from incapacitating fatigue, pain and a series of associated symptoms.1 The complaints are not due to any known underlying disease, and the pathophysiology has not been elucidated. CFS may be provoked by infections such as infectious mononucleosis, or by any of a series of other triggers. Because of the association with preceding infection and the similarities in symptomatology with sickness behaviour that can be induced by proinflammatory cytokines,2 many studies aiming to find abnormal cytokine regulation have been performed on CFS.3 The picture that emerges from these studies is by no means consistent. In publications the reasons for the discrepancies found often remain unclear, but it seems likely that factors like age and gender of the patients, composition of the control groups, the robustness of the pre-analytical procedures (such as sampling, handling, centrifugation and storage) and the kind of assays used, play an important role. In a recent systematic review on cytokines in CFS 3, the most consistent finding was elevation of the anti-inflammatory cytokine transforming growth factor β (TGF-β). Recently we performed a large prospective cytokine study in female CFS patients.4 This study was methodologically robust, as the age- and gender-matched controls from  the patients’ neighbourhood were  recruited  and  bled  at the same time and in the same place as the patients.   In this way the pre-analytical handling of the samples was exactly the same. The results of this study, in which 92 inflammatory markers were measured simultaneously, have been published elsewhere.4 In another cohort of CFS patients and similarly matched controls, we also sampled blood to measure inflammatory markers.5 In the present report we demonstrate the relevance of stringent methods of controlling for variability that may arise during the pre-analytical phase. To this end we describe the results of TGF-b1 measurements in these two CFS cohorts.

Patients
Two cohorts of patients with CFS were enrolled in this study. The first cohort (cohort I) consisted of patients who participated in a double-blind randomized controlled trial (RCT) on the effect of IL-1 inhibition on CFS-related symptoms.6 The study was conducted at the Department of Internal Medicine and Expert Centre for Chronic Fatigue (ECCF) of the RadboudUMC, Nijmegen, the Netherlands. Details of the study were described elsewhere.6,7 In short, 50 female patients aged between 18 and 59 were enrolled, who fulfilled the Center for Disease Control (CDC) criteria for CFS.1 Use of medication was not allowed, oral contraceptives and paracetamol excepted. Each of the patients was asked to bring a healthy female neighborhood control in her own age range (± 5 years), to their first study visit. The second cohort (cohort II) consisted of 90 female patients between 18 and 65 years fulfilling the CDC criteria for CFS. The criteria for inclusion and exclusion have been described in detail elsewhere.5 Just as with Cohort I, a proportion of patients was asked to bring a healthy female neighborhood control matched for age and gender to their first study visit. All participants provided written and oral informed consent before inclusion. The hospitals’ ethics committee (Commissie Mensgebonden Onderzoek Regio Arnhem/ Nijmegen) approved the study protocols (2014/025 and 2013/113). The study was performed in accordance with the declaration of Helsinki.

Questionnaires
Fatigue was measured in both patients and controls using the fatigue severity subscale of the checklist individual strength (CIS), which has been used frequently with CFS patients.8 Scores on the CIS-f run from 8 to 56, a score ≥ 35 reflecting severe fatigue.

Blood collection
Blood samples were collected at baseline at the outpatient clinic for Internal Medicine at the RadboudUMC in Nijmegen, the Netherlands from all patients of Cohort I. Samples of controls were collected simultaneously with those of patients. Venous blood was collected in EDTA tubes, and kept on ice until centrifugation, which was performed within 2-3 hours (2959 g). Plasma aliquots were then kept frozen at -80°C for maximally 2 years. For Cohort II, the sampling, handling (centrifugation speed 1361 g) and storage of the blood of patients and controls were done in similar fashion at the Donders Centre for Neuroimaging in Nijmegen, the Netherlands.

Measurements of TGFβ1 and P-selectin
Total TGF-β1 levels were measured by enzyme-linked immunosorbent assay (ELISA), as previously described in detail (R&D systems).9 All samples were acid activated to activate latent TGF-β (1 M hydrochloric acid, 30 min, room temperature, neutralization with 1M NaOH, followed by direct analysis). All assays were performed on the same day using the same reagents.
P-selectin was measured in a proportion of samples by ELISA (R&D systems) according to the instructions of the manufacturer.

Confirmation experiment
For a second experiment, two EDTA venous blood samples were taken from 5 healthy controls at the same time point. Samples were handled in similar fashion, the only  difference being the  g-force used for plasma centrifugation. One sample from each participant was  centrifugated at a speed of 2959 g and one at  1361 g. Subsequently platelet numbers were measured in all samples.

Statistical analysis
Study data were analyzed using IBM SPSS statistic package version 22. All continuous variables are presented as means and standard deviations (SD)/ standard error of the mean (SEM). For group comparison a Students T-test was used. Pearson’s correlation was used for the correlation between TGF-β and P-selectin.

Baseline characteristics
As displayed in table 1, age did not differ significantly between patients and controls of both groups. As expected, patients had higher fatigue scores compared to controls (51.5 vs 19.1, p < 0.001), but there were no differences between cohort I and II 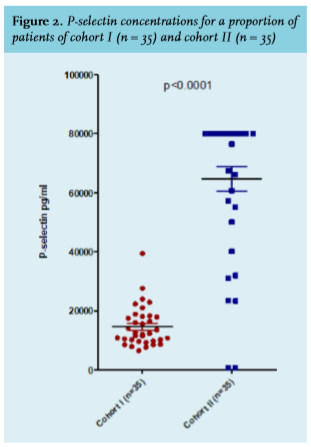 TGF-β1 and P-selectin
The results of the TGF-β1 measurements in the patients and controls from Cohort I are depicted in figure 1A. No differences in TGF-β1 concentrations were found between patients and healthy controls. Likewise, the results of the measurements in Cohort II did not reveal differences between CFS patients and controls (figure 1B). However, there was a large differences in the TGF-β1 concentrations found between Cohort I and Cohort II. As it is known that platelets are a rich source of TGF-β,10 we wondered whether the higher TGF-β1 levels could be caused by a higher number of (activated) platelets in Cohort 2. To explore whether platelet activation differed between the two groups, we measured P-selectin as a platelet marker in a random selection of samples.11 The concentration of P-selectin differed greatly between the two cohorts (p < 0.001; figure 2). There was a strong correlation (r 0.79, p < 0.0001) between the concentrations of TGF-β1 and P-selectin. Differences in platelet activation could be explained by differences in the g-force of the centrifuges used at the two study locations.

In this report we demonstrate that even with scrupulous methodology, inaccurate results may be obtained. It turned out that the different properties of the centrifuges used at the two study locations were responsible for differences in platelet numbers and platelet activation (as assessed by P-selectin measurements).
Although it is well known that platelets contain considerable amounts of TGF-β,10,12 this is often not taken into account when measuring circulating concentrations of this cytokine. Many cytokine studies do not adequately describe the pre-analytical procedures of patient samples and controls.
In a recent study on TGF-β1 in CFS patients a pitfall similar to the one in the present paper was encountered. In this otherwise carefully performed study differences in the duration of centrifugation between two technicians explained the differences found in TGF-β1 between patients and controls.13 Our current data show that if, for example, samples of the controls of cohort I would have been prepared like those of cohort II, strong differences could have been observed, which would not have been due to actual differences caused by the underlying disease but solely to sample handling.
The use of different sample collections for patients and controls is fairly common. This was in fact the case in the studies that incriminated the retroviruses XMRV and XMLV.14,15 It led to results that misled both the scientific community and more sadly, the patients suffering from CFS.16
In conclusion, we want to make a plea for better standardization of pre-analytical sample handling for patient studies, not only in CFS research. The use of neighborhood controls who are bled at the same time and location, whose samples undergo the exact same procedure as those of the patients, is a good way of enhancing the quality of such research. In addition, precise reporting on the nature of the control group and the pre-analytical procedures followed with controls and patients is essential.

The authors thank P. ten Dijke for his suggestions with respect to TGF-β1 analysis and C. de Bree for her help with the P-selectin analysis. This study was supported by the Dutch CFS/ME patient advocacy group and an independent donor that wishes to remain anonymous. The funders had no role in study design, data collection, data analysis, data interpretation or writing of the report.
J. van der Meer, H. Knoop, L. Joosten and M. Roerink defined the research theme and designed the research methods. M. Roerink, L. Hawinkels, R. Raijmakers and M. van der Schaaf conducted the study and analysed the data. M. Roerink interpreted the results and wrote the first draft of the manuscript; the other authors reviewed and edited the manuscript.