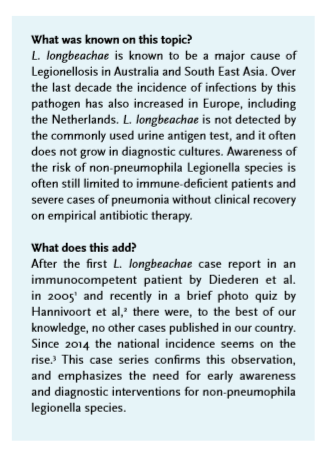 As one of over 50 species, L. longbeachae belongs to the extensive family of Legionellae. These gram negative, opportunistic bacteria can cause Pontiac fever and Legionnaires’ disease, a multisystem disease including pneumonia with a severe course. It has no particular clinical features that distinguish it from other types of pneumoniae.4,5 In contrast to L. pneumophila which is linked mainly to contaminated water reservoirs, the general source of contamination for L. longbeachae is considered to be compost and other growing media.6,7 Since L. pneumophila is responsible for 80-90% of the Legionella infections in Europe,8-10 our diagnostic system is mainly targeting this species. The restricted sensitivity of the urine antigen test and the low sensitivity of culture testing cause the risk of false rejection of the diagnosis Legionella’s pneumonia.
L. longbeachae is increasingly being reported in Europe.3,8,9,11 In our local hospital we recently hospitalized two immunocompetent patients within three weeks, both infected by L. longbeachae. Given the low incidence of this pathogen, this duo-cluster is remarkable, suggesting an increased presence of L. longbeachae. This article emphasizes the importance of early awareness regarding non-pneumophila Legionella infections, and as such advocates the need for targeted PCR usage in hospital laboratories.

Patient A is a 79-year-old man admitted in June 2017 with malaise, fever and heavy diaphoresis. Medical history included type 2 diabetes mellitus and hypertension. He had a history of heavy nicotine abuse in the past with 100 pack years until 8 years ago, implying the possibility of undiagnosed chronic obstructive lung disease. Physical examination showed a heart rate of 80/minute, blood pressure of 200/105 mmHg, SpO2 of 94% without supplemental oxygen, respiration rate of 16/minute and a tympanic temperature of 40° Celsius. C-reactive protein (CRP) was 197 mg/l and there was minimal leucocytosis. Chest X-ray showed consolidation of the left upper lung. Urine antigen tests (Streptococcus pneumoniae and Legionella pneumophila) were negative. We suspected pneumonia and started intravenous treatment with cefuroxim. Two days later there was no clinical improvement and CRP rose to 330 mg/l. Sputum cultures and HIV-testing remained negative. On suspicion of atypical bacteria, antibiotics were switched to azithromycin. On day four of admission a BAL was performed, and subsequent PCR on Legionella species revealed L. longbeachae upon which antibiotics were switched to ciprofloxacin. Despite the positive PCR results, sputum cultures remained negative for Legionella species. On day six a chest CT-scan showed extensive bilateral ground glass opacity (figure 1). The following days the patient recovered slowly; respiratory effort, oxygen demand, CRP and leucocyte count decreased. Unexpectedly, he died on the general ward on day ten. Autopsy revealed evident pulmonary oedema, pleural effusion (650 ml bilateral), and cavitation and haemorrhage of the left upper lobe. The heart was hypertrophic, with signs of subendocardial infarction of the left ventricular cardiac wall, in addition with signs of swelling of liver and spleen implying acute congestive cardiac failure as the probable cause of death. 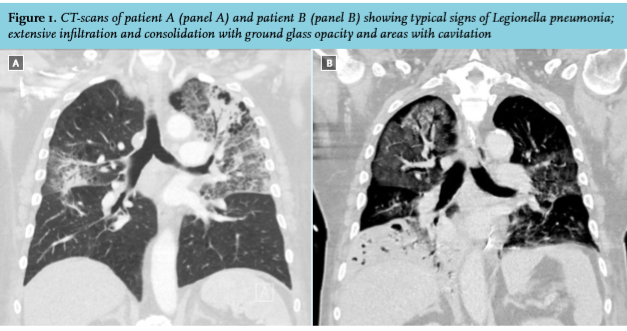 Patient B, also a 79-year-old man, was admitted three weeks later with dyspnoea, altered consciousness and confusion. Medical history revealed obstructive sleep apnoea syndrome and – uncomplicated – knee surgery 10 days before this current admission. He was a non-smoker. Notable detail was a recent 2-week vacation in Turkey 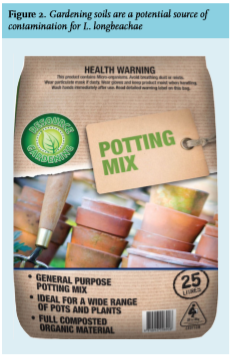 from which he had returned five weeks before this admission. Physical examination on admission showed a heart rate of 104/minute, blood pressure of 130/70 mmHg, SpO2 of 93% with 6 litres of oxygen trough an oral-nasal mask, respiration rate of 30/minute and a tympanic temperature of 37.8° Celsius.
Chest CT-scan showed extensive right-sided ground glass opacity. Urine antigen tests (Streptococcus pneumoniae and Legionella pneumophila) and sputum cultures remained negative. Because of the recent travel and hence potential atypical pneumonia, treatment with ciprofloxacin and amoxicillin was started. The next day he was transferred to the Intensive Care Unit due to respiratory insufficiency. Physical examination showed tachypnoea of 30/minute, SatO2 94% with 10 litres of oxygen per minute on a non-rebreather-mask, tachycardia of 120/minute, blood pressure of 127/71 mmHg and tympanic temperature of 38° Celsius.  Laboratory results showed a rise in CRP rise to 318 mg/l and leucocytosis of 25.7 x109/l.   Blood gas analysis showed hypoxia (pH 7.41, HCO3- 20.3 mmol/l, Base Excess -3.9 mmol/l, pCO2 4.2 kPa, pO2 9.2, SatO2 94%). He was intubated and mechanically ventilated. The following days his pulmonary condition worsened and on day four of admission antibiotics were switched to ceftriaxone. CT-scan showed expansion of infiltration of the left lung (figure 1, panel B) upon which a BAL was performed. On day seven ciprofloxacin was restarted, because clinical suspicion of Legionellosis still remained, and his clinical situation under treatment with ceftriaxone worsened. PCR on atypical pathogens in the BAL liquid tested positive for L. longbeachae whereas cultures remained negative. Treatment with ciprofloxacin was continued for three weeks. The patient recovered slowly, and after 18 days he was extubated and eventually discharged from the hospital. Retrospectively, patient A frequently worked with potting soils in his garden, potentially being the source of contamination. Patient B didn’t work with compost soils, but he had recently been gardening near his garden pond. Unfortunately the Area Health Authorities performed no source detection investigation, because L. longbeachae is not yet recognized as a public health

Despite an increase in the last decade, Legionellosis caused by non-pneumophila species is still rare on our continent. From 2011 to 2015, 3645 culture-confirmed cases of Legionella’s infection in Europe were documented, 83% of which were caused by L. Pneumophila.9,10 Among the non-pneumophila group, L. longbeachae is the dominant species with 35 culture-confirmed cases (1%) within these five years.9-11 In Australia and Eastern Asia L. longbeachae is responsible for approximately half of the Legionellosis.4,12 In the Netherlands we confirmed a maximum of 1 patient per year in the decade preceding 2014, but from then on the incidence appears to rise (table 1). How can this be explained? As we know, many factors contribute to incidence outcomes, such as geographical distribution, infectious dose, infection type, host susceptibility and the sensitivity of detection techniques. A contributory theory could be that there has been a change in the composition of European compost soils. One of the explanations why L. longbeachae occurs in large numbers in Australia and South East Asia derives from the theory that the presence of bark containing sawdust and hammer milled bark makes these soils a natural habitat for the bacterium.12 Nowadays Australian growing materials and soils even come with warning labels attached (figure 2). In Europe, peat rather than composted bark is the major component used in growing media, but the composition is always subject to change.13

Another contributing factor could be the wider application of PCR with regard to Legionella species in hospital laboratories nationwide, causing higher detection rates. Formerly incidence rates depended on the availability of appropriate laboratory techniques and skilled employees for analysis. In Scotland, where several outbreaks of L. longbeachae were recorded, researchers also described underdetection of these infections.5,14 Current diagnostics like the urine antigen test are useful to detect L. pneumophila serogroup 1, but are not suitable for non-pneumophila Legionella species.15 Whereas bacterial culture remains the golden standard for confirmation of Legionella’s disease is,3,10 this technique requires specialized laboratory media as overgrowth with competing flora is a common problem.5,15 As illustrated by both of our cases the cultures remained ‘false’ negative, confirming that PCR is an essential test for the diagnosis. 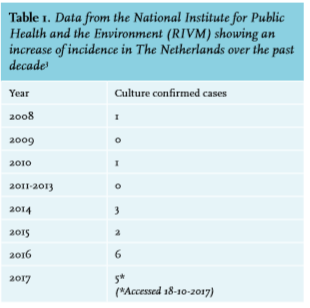 In conclusion, L. longbeachae is a sporadically emerging pathogen with a severe course of disease. Over the past decade the number of reports on L. longbeachae has increased markedly across Europe. Timing of diagnosis and targeted therapy influences the severity and course of the disease. Recommended antibiotic treatment for L. longbeachae (like pneumonia with (suspected) atypical bacteria in general and Legionella specifically) are fluoroquinolones like ciprofloxacin. Physicians and guideline committees, like the Dutch SWAB-guidelines committee,16 have adopted the concept of using the ‘severity of illness’ at the time of clinical presentation (based on validated scoring systems like CURB-65 and Pneumonia Severity Index (PSI), and the need for ICU admission) in order to choose the type of empirical antimicrobial in community acquired pneumonia (CAP). In category IV (severe CAP with ICU admission) it is always recommended to empirically cover S. pneumoniae, Legionella species and Gram-negative bacteria.16
It is difficult to predict atypical bacteria being the cause of CAP based on presentation, signs and symptoms of CAP, medical history, physical examination and laboratory results.17 We recommend extending the medical interview on admission routinely from inquiring after travel abroad and visits to swimming pools and sauna’s to questions on recent gardening activity and exposure to gardening soil. We also recommend the early usage of rapid and sensitive PCR techniques on non-pneumophila Legionella species in patients with severe and treatment-resistant pneumonia, especially in the presence of risk factors like recent exposure to gardening soils. This way, the diagnostic process may be instrumental in improving things; more awareness among diagnosing clinicians and laboratory staff of non-pneumophila Legionella species is necessary to reduce underdiagnoses and associated risks.