Mycobacterial skin and soft tissue infections: TB or not TB? 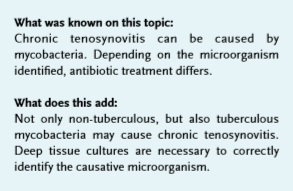 Chronic tenosynovitis is known as one of the clinical presentations of nontuberculous mycobacterial infection, but is rarely described as the sole presenting symptom of Mycobacterium tuberculosis infection or tuberculosis. In 15-30% of tuberculosis cases, one or multiple extra-pulmonary manifestations are noted.1 In this group, musculoskeletal involvement is seen in 10-15%, most often as spinal tuberculosis or Pott’s disease.2 Tuberculous tenosynovitis is a rare presentation of musculoskeletal tuberculosis, mostly described in immunocompetent patients.1-3 In contrast, nontuberculous mycobacteria (M. marinum, M. abcessus, M. chelonae and other species) cause skin and soft tissue infections more frequently. They are ubiquitous environmental organisms, acquired by direct inoculation. There is no evidence for animal-to-human or human-to-human transmission.4
Four cases of mycobacterial skin and soft tissue infections diagnosed between 2013 and 2015, including one case involving M. tuberculosis, show how important lessons can be drawn from the observed delay in diagnosis, ranging from the importance of clinical clues pointing towards mycobacterial involvement to the appropriateness of tissue cultures and biopsy specimens. To broaden the perspective on these rarer clinical phenomena a literature search on mycobacterial tenosynovitis was also performed.

Case 1
A 75-year-old woman presented with painful swelling of the wrist, expanding to the little finger. Despite multiple investigations and both medical and surgical treatments (table 1), no definite diagnosis or cure could be established after 12 months. Differential diagnoses included carpal tunnel syndrome and presence of a pseudocyst. Final diagnosis was only arrived at after surgical debridement revealing macroscopic rice bodies and mycobacterial culture of deep tissue biopsies revealing the presence of M. avium. She was treated with clarithromycin 500 mg b.i.d. for seven months, in association with ethambutol 1200 mg q.d. during the first month, which was stopped after four weeks when the strain appeared resistant. The lesions healed, despite persistent swelling of the little finger as long-term sequel.

Case 2
A 60-year-old woman developed swelling and stiffness of two fingers of the right hand after a minor trauma. Based on histological examination of a tissue biopsy, a working diagnosis of rheumatoid arthritis was made, and treatment was initiated with salazopyrine 500mg b.i.d. The symptoms persisted, however, and she developed painless ascending subcutaneous nodules on the right forearm (figure 1C). One month after surgical debridement, mycobacterial cultures revealed M. marinum. Salazopyrine was stopped and she was treated with azithromycin 500 mg q.d. and ethambutol 1200 mg q.d. during four months, resulting in full recovery. 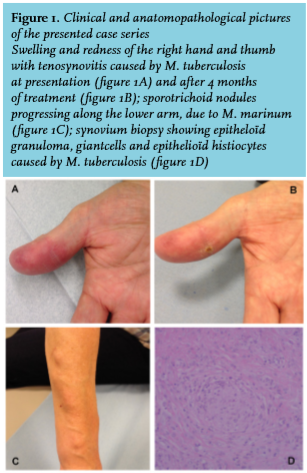 Case 3
An 80-year-old woman was referred to our clinic five months after she developed swelling and ulcers on the right lower leg and foot after a minor trauma. She was known with polymyalgia rheumatica for which she received corticosteroids (methylprednisolone 8 mg q.d.). Since the lesions persisted for more than 5 months, a skin biopsy and culture was performed which yielded M. chelonaeabscessus complex. No further surgical procedures were performed. Antimycobacterial treatment was initiated consisting of clarithromycin 500 mg b.i.d. in combination with linezolid 600 mg b.i.d., and corticosteroids were discontinued. Linezolid was stopped after two weeks due to toxicity while clarithromycin was continued for seven months. However, two months after discontinuation a relapse occurred, triggered by high doses of corticosteroids for a bout of polymyalgia rheumatica. A new culture of a lesion confirmed the mycobacterial relapse. Clarithromycin and linezolid were restarted, but linezolid had again to be discontinued due to gastro-intestinal toxicity. The patient was subsequently hospitalized during three months for IV treatment with imipenem 500 mg q.i.d. associated with tobramycin 5 mg/kg q.d. adjusted by drug monitoring. Corticosteroids were tapered and stopped. Clarithromycin 500 mg b.i.d. and cotrimoxazole 800/160 mg b.i.d. were prescribed for another three months. A long revalidation phase ensued characterized by recurring granulomatous draining inflammatory lesions, but without growth of mycobacteria, considered a paradoxical reaction. Complete recovery was obtained.


Case 4
An 81-year-old man presented with swelling and redness of his right hand and thumb for four months after a minor trauma (figure 1A and 1B). He regularly cleaned his fish tank without wearing gloves. He also took care of his wife, who was diagnosed with pulmonary tuberculosis. Tenolysis was performed and tissue biopsy revealed granulomas (figure 1D); cultures yielded M. tuberculosis complex. A skin tuberculin test was positive. A chest X-ray showed a pleural effusion from which M. tuberculosis could be cultured. Treatment with rifampicin 300 mg b.i.d. and isoniazide 300 mg q.i.d. during six months, in association with pyrazinamide 2000 mg q.d. during the first two months, was initiated. The patient made full recovery.

We present four clinically similar cases of mycobacterial skin and soft tissue infection caused by different tuberculous and nontuberculous mycobacterial species, all characterised by long delay in diagnosis and appropriate treatment. These infections are rare, hence not readily recognized. We performed a literature search on mycobacterial tenosynovitis using the Medline terms ‘mycobacterium AND tenosynovitis’. The search was limited to case series of at least three patients, published on or after 1 January 1997, written in English and clinically sufficiently detailed. Referenced articles were searched for additional case series. Results are summarized in table 2.5-21 Of the 162 hits, only 20 fulfilled the criterion of at least three patients, three of those were excluded for lack of sufficient clinical information.
In four of the 17 remaining case series tenosynovitis was caused by M. tuberculosis, in 12 by non-tuberculous mycobacteria (table 2). One case series concerned M. bovis tenosynovitis, a mycobacterium belonging to the M. tuberculosis complex species best known as the causative agent of tuberculosis in cattle. Overall mycobacterial tenosynovitis appears to occur in a wide range of the population with a mean age at time of infection ranging from 32-72 years, also reflecting different exposure risks such as occupation. The use of immunosuppressive medication is a risk factor for both tuberculous and non-tuberculous mycobacterial infection,22 but most patients are immunocompetent, as illustrated by our cases and the case series selected, only three of which involve immunocompromised patients.7,12,13
As non-tuberculous mycobacteria are ubiquitous environmental species, skin and soft tissue infections usually result from direct inoculation of the microorganism, as is illustrated in a recent outbreak of M. chelonae cutaneous infections resulting from contaminated ink used for tattoos.23 Similarly, M. marinum is a pathogen associated with fishes and aquatic exposure.24 Furthermore, as illustrated in our cases and corroborated by the selected case series concerning non-tuberculous mycobacterial tenosynovitis, a preceding minor trauma has been frequently identified as an exposure risk. In contrast, M. tuberculosis infections generally result from person-toperson transmission. Therefore in taking medical history it should be explored whether patients with suspected mycobacterial skin infections have recently been in contact with patients suffering from or treated for tuberculosis. After infection, hematogenous spread to a musculoskeletal location is considered to be the most common pathway.2,3 However, in our case 4, involving lung tuberculosis of the patient’s wife, inoculation in the thumb due to local trauma should be considered the porte d’entrée, similar to non-tuberculous tenosynovitis. 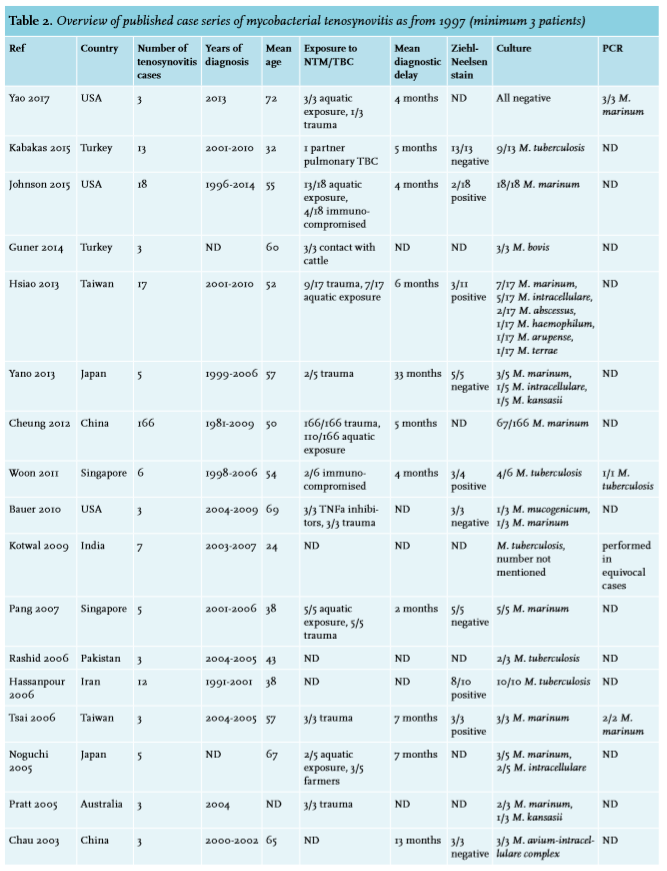 Spreading of lesions is typically slow and progresses over a period of weeks to months. In many patients there is a typical sporotrichoid spread, i.e. the appearance of subcutaneous nodules that progress along dermal and lymphatic vessels (figure 1C). As cutaneous sporotrichosis, a rare fungal infection which has a similar clinical presentation, does not occur Europe, mycobacterial infection should be suspected.25 In all patients, however, there is a considerable delay in diagnosis ranging from five up to 12 months. In each patient of our case series, there were clinical clues that could have led to an earlier diagnosis, such as specific underlying predilection factors, typical clinical features and histology.
Diagnosing mycobacterial tenosynovitis is a difficult and often lengthy process. Biochemical analysis does not contribute to the diagnosis, but imaging studies can be of use: ultrasound or MRI may show the presence of ‘rice bodies’, as exemplified by the case series published by Woon et al12 and Chau et al.21 Nevertheless this was not the case with our four patients. A tuberculin skin test has a low sensitivity and is insufficiently able to distinguish between M. tuberculosis and non-tuberculous mycobacteria. As a consequence the positive result of this test did not contribute to the diagnosis in our cases, nor did it appear to be useful in the selected case series. An interferon-gamma release assay is better at detecting M. tuberculosis although there still is cross-reactivity with a few non-tuberculous mycobacteria, such as the frequently encountered M. marinum.26
For a definite diagnosis of mycobacterial skin and soft tissue infection an appropriate tissue biopsy is required. This can show a typical granulomatous inflammation (figure 1D). In our patient 1 surgical debridement revealed macroscopic rice bodies, which can be another clue to the diagnosis. Rice bodies are a nonspecific response to inflammation, macroscopically resembling polished rice. They are commonly found in synovial lavage of rheumatoid joints.12 However, when found in tenosynovium, a mycobacterial cause should be suspected.27 The most important contribution comes from cultures of deep tissue biopsies, as the anatomopathological finding of granulomas, and especially Ziehl-Neelsen staining and synovial fluid cultures have low sensitivity.2 In case of suspicion of mycobacterial infection this should be mentioned when providing tissue to the laboratory, since culturing these bacteria requires adapted processing, especially in the case of non-tuberculous mycobacteria, where less severe decontamination procedures and lower incubation temperatures are necessary.4,28
Because antibiotic susceptibility of non-tuberculous mycobacteria is unpredictable and variable, and M. tuberculosis requires specific combinations of antibiotics, the optimal treatment can only be initiated once a definite microbial examination has been performed, which usually takes several weeks. Molecular diagnostic approaches as polymerase chain reaction (PCR) for M. tuberculosis can lead to a faster diagnosis, but the value of this approach for non-tuberculous mycobacteria is less clear, partly because of their ubiquitous presence in the environment, leading to contamination.2 Interestingly, this did not lead to a shorter diagnostic delay in the four case series where PCR was performed, most likely because this technique was only used after cultures remained negative. The treatment of non-tuberculous infections is not analogous to the treatment of M. tuberculosis infections and choosing the correct treatment is difficult, partly because of the bad correlation between in vitro susceptibility and clinical response for many non-tuberculous mycobacteria. ATS/IDSA guidelines provide excellent guidance on treatment of these infections, bearing in mind that the recommendations for infrequently encountered mycobacteria are based on few reported cases, emphasizing the importance of case reports and case series.4,29

In conclusion, even in high resource countries, M. tuberculosis must be considered a causative agent of chronic tenosynovitis next to the more common non-tuberculous mycobacterial skin and soft tissue infections. In all mycobacterial infections, actively searching for predilection factors, exposure risks and clinical clues is clearly indicated. Deep tissue biopsy cultures are indispensable to identify granulomas and to determine the species and strain of mycobacterium, which directs the duration and choice of antimycobacterial treatment.