Q fever is a zoonosis caused by the bacterium Coxiella burnetii which occurs worldwide.1 Approximately 40% of infections with C. burnetii result in clinical symptoms, ranging from mild flu-like illness to atypical pneumonia. Approximately 2-5% of all acute Q fever patients are hospitalised.1,2 Possible factors of importance for hospitalisation are age, sex, smoking behaviour, underlying medical conditions, and pregnancy.3 Furthermore, exposure to higher doses of C. burnetii may increase the severity of disease and thereby lead to hospitalisation.4-6 In the Netherlands, Q fever is a notifiable disease to enable outbreak detection and source tracing for effective outbreak control. From 2007 to 2010, the south of the Netherlands experienced large seasonal outbreaks of Q fever with over 4000 notified cases.7 During those outbreaks about 22% of notified cases were hospitalised, a much larger percentage than reported in the international literature.8 Some municipalities with higher Q fever incidence and presumably higher infection pressure had lower proportions of hospitalised cases. In addition, diagnostic delay was shown to be inversely related to the number of years that a municipality in the Netherlands had experience with Q fever.9,10 General practitioners (GPs) in the Netherlands play a pivotal role as gatekeepers for the healthcare system and they take the decision whether a patient should be referred to a hospital-based medical specialist. We hypothesised that GPs who have more experience with the diagnosis and treatment of Q fever would be less inclined to refer (suspected) acute Q fever patients to hospital, thereby reducing the proportion of hospitalised cases in their geographic area. If this hypothesis holds, this would indicate that early interventions to improve GP knowledge of an emerging infectious disease might reduce hospitalisation rates. In this study, we examined two aspects: the extent of geographic variation in Q fever hospitalisation and its potential association with GP experience with Q fever.

We collected information about confirmed and notified cases reported to the public health service ‘Hart voor Brabant’ during the peak epidemic in the years 2008-2009. ‘Hart voor Brabant’ is a large public health service region for 1 million citizens, comprising 25 municipalities in the south of the Netherlands and including both urban and rural communities. Most Q fever patients reported during the epidemic resided in this particular region.
The case definition for Q fever is fever, pneumonia or hepatitis in combination with laboratory confirmation by serology or PCR. Laboratories automatically report confirmed cases to the public health service.
On a voluntary basis, further information was obtained from notified cases via telephone interviews performed by public health professionals. Information extracted from the notifications included age, sex, place of residence, date of onset of illness, diagnostic delay (defined as time from the date of specimen collection to date of laboratory diagnosis), possible risk factors for severe disease outcomes (smoking and underlying respiratory diseases), and the name of the GP, which was available when the GP had requested diagnostic tests. Our outcome variable was whether a patient was hospitalised.
We used binomial logistic regression to analyse the association between the risk of hospitalisation and the number of Q fever cases per municipality. We expected the hospitalisation rate to be higher in municipalities with lower numbers of Q fever cases. We adjusted for age, sex, calendar year and underlying respiratory diseases, and municipality was included in the regression model as random effect to account for clustering at municipality level. As the number of Q fever cases is right skewed, the number of Q fever cases was log-transformed. In addition to this, we used linear regression to describe monthly trends of hospitalisation during the study period.
Next, we analysed the association between hospitalisation and the number of previous acute Q fever patients in a particular GP practice. The number of previous acute Q fever patients was used as a proxy for GP experience. We grouped the patients into four arbitrarily chosen categories: one, two, three to seven and eight or more Q fever patients that had visited a GP. We expect the hospitalisation to be lower with increasing GP experience. We used the same binomial logistic regression model as mentioned above, except we replaced the number of Q fever cases by the four GP experience categories.
We also examined the association between diagnostic delay, defined as the duration in days between disease onset and diagnostic confirmation, and GP experience category. This was done by linear regression. Diagnostic delay was log-transformed. To account for clustering at GP level, GP was included in the model as random effect. For reporting, the estimated coefficients were back-transformed.
To evaluate an effect over time on hospitalisation and diagnostic delay, we compared these two outcome measures between Q fever cases diagnosed in 2008 and 2009 using the Wilcoxon test.
To examine whether selection bias could have occurred by only including hospitalised cases for whom the GP name was known, we compared cases with and without GP name known with respect to hospitalisation, age, gender, duration of hospitalisation, underlying respiratory illness and diagnostic delay using a chi-square test.
Statistical analyses were performed using STATA software, version 14. 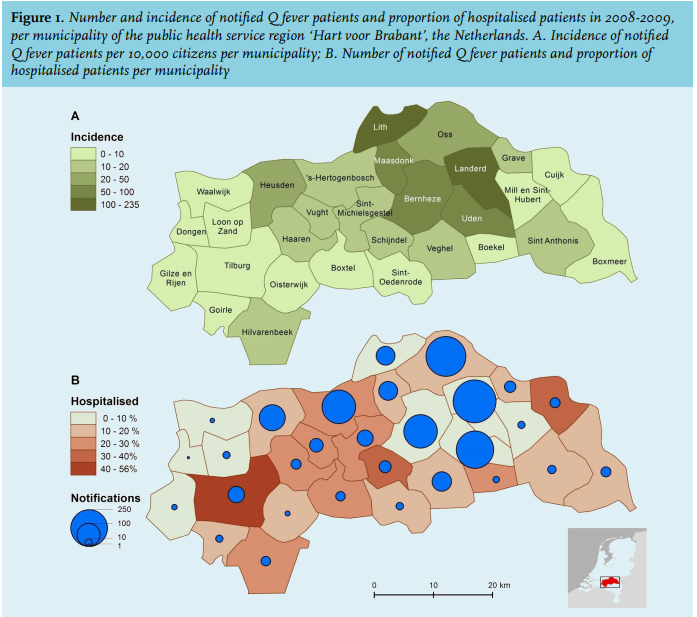 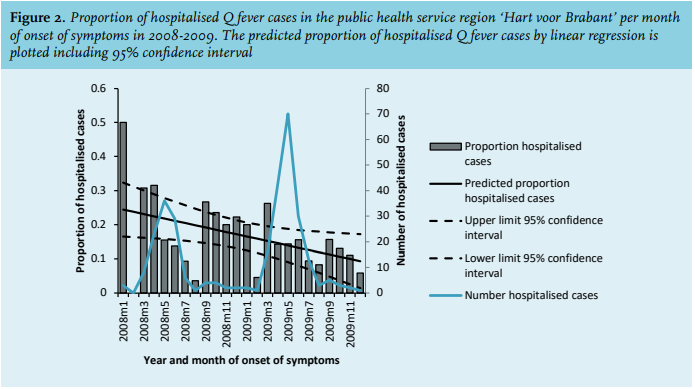 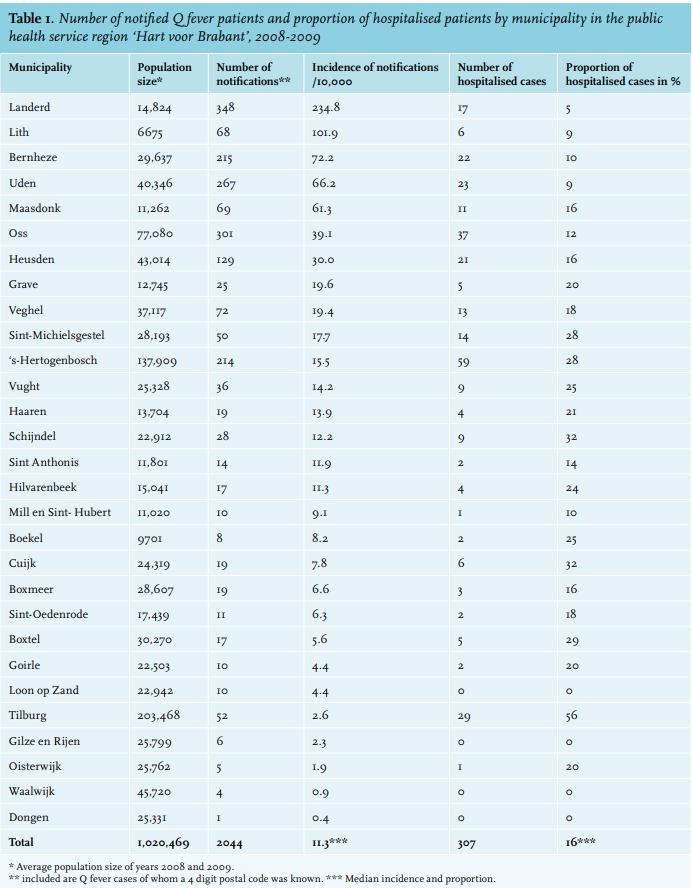 We found small area variations in the proportion of Q fever cases hospitalised in an epidemic region in the south of the Netherlands. In the course of the 2008-2009 epidemic, the proportion of cases hospitalised as well as the diagnostic delay decreased. While a low proportion of hospitalised cases in a municipality cannot be attributed to more experienced GPs in that municipality, the effect of GP experience was measurable at the individual practitioner level. Familiarity of a GP with Q fever may prompt early diagnosis and treatment, without the need to refer the patient to hospital.9,11 It is also likely that high awareness among GPs of Q fever epidemiology leads to more diagnostic testing of suspected cases with relatively mild symptoms, resulting in a lower proportion of patients hospitalised. Moreover, GPs who suspect Q fever but are unfamiliar with the disease might refer patients earlier to a hospital, even when the symptoms are relatively mild. After referral of a patient by the GP for hospital evaluation, the final decision whether to admit this patient to hospital is made by a hospital physician. However, in most cases a referral by the GP of a patient with pneumonia will lead to hospital admission and very often the referral follows telephone discussion between the GP and hospital physician.
For the analysis of GP experience, we included patients whose GP was known by the public health service ‘Hart voor Brabant’. This leads to exclusion of patients who presented directly at the hospital emergency department and those who were diagnosed by a specialist. Our conclusions about the effect of GP experience on hospitalisation are therefore based upon a presumably clinically milder subset of Q fever cases.
The introduction of the C. burnetii PCR in 2008, a more rapid testing technique compared with serology testing, could have contributed to a shorter diagnostic delay.12 There have been changes in the antibiotics prescribed to Q fever patients, but we assume that there were no further changes in prescribing over the period 2008-2009, which could have had an impact on the hospitalisation rate.10
Our findings suggest that the risk of hospitalisation decreases when a GP has seen many Q fever cases. This is our most viable indication that pre-existing knowledge and Q fever experience influence the management of a case and thereby the risk of hospitalisation. The decline in diagnostic delay for more experienced categories of GPs supports the finding that more disease experience has an impact on case management.

We conclude that, for notified Q fever cases, the risk of hospitalisation decreased during the epidemic in the Netherlands. Both the diagnostic delay and the proportion of patients hospitalised were lower for those cases seen by a GP with prior Q fever experience. This suggests that during the Q fever outbreak, increased GP experience led to reduced hospitalisations. Based on these observations, early and targeted information for GPs about the appearance and distribution of an uncommon disease, including diagnostic and therapeutic options, could improve GP knowledge and subsequently decrease the risk of hospitalisation. During the outbreak, the GPs were informed about Q fever by the public health service about four times a year. In addition, countrywide educational sessions became available at a later stage during the outbreak. Anecdotal information suggests that GPs usually read the information when they start to receive patients suspected of having Q fever. We assume, based on our results, there is an opportunity for additional benefit of early targeted information towards GPs to reduce the hospitalisation rate, although the overall effect might be modest.

We would like to thank Ben Bom for compiling the maps and Lisa Hansen for English language editing.

All authors declare not to have conflicts of interest or commercial affiliations. The final manuscript is seen and approved by all authors.