Erysipelas was considered a possible diagnosis by the general practitioner. However, there were signs that make this diagnosis less likely. Although erysipelas can develop in any area of the skin, it is typically found on the lower extremities. One study showed that 77% (48 out of 62 patients) of erysipelas cases involved the lower extremities, 13% involved the upper extremities and in only 3% of cases the lower abdomen was affected.1 There was no sign of a portal of entry, which is found in most cases,2 and the patient developed sepsis-induced hypotension after four days of adequate antibiotic treatment. These findings led us to reconsider the diagnosis.
On physical examination an infiltrate was palpable underlying the erythema, and during palpation crepitus was observed that suggested subcutaneous emphysema. Bowel sounds were hyperactive, but the patient did not vomit or experience nausea. A few days later a more detailed medical history was taken and revealed the patient had vomited in the days before presentation. An ultrasound confirmed presence of a fluid collection localised under the possible infiltrate, but was otherwise inconclusive. The surgical department was consulted because necrotising fasciitis was the diagnosis to be ruled out. The erythema, fever, subcutaneous emphysema and septic shock could all be signs of necrotising fasciitis, but the absence of ‘disproportionate pain’ was atypical.3 The CT scan of the abdomen showed an incarcerated herniation of the intestine (figure 2). The presence of (free) air suggested intestinal perforation. The patient was immediately transferred to the operating room where two perforations of the transverse colon inside of the hernia sac were found. Ten centimetres/four inches of the transverse colon were resected. Contents of the large intestine were only found inside the hernia sac and in the subcutis. The antibiotic treatment given on the ICU consisted of piperacillin/tazobactam as well as fluconazole, which was later switched to anidulafungin because of a positive ascites culture for Candida albicans. The ascites culture also showed Enterobacter cloacae, Morganella morganii, E. coli and Klebsiella pneumoniae. Of these bacteria only Morganella morganii was found in the blood cultures collected at presentation. Because of the condition of the patient, primary anastomosis was postponed and performed during a second procedure three days later. Eleven days after initial presentation the patient could leave the ICU. 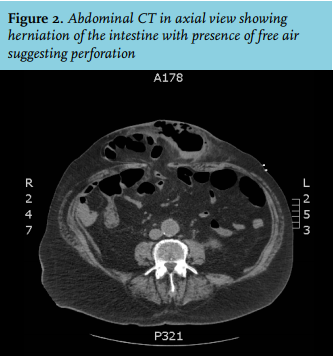 An incisional hernia is the most probable cause of the herniation and incarceration that developed in this patient. It is estimated that 10-15% of patients undergoing a laparotomy incision eventually develop incisional herniation, 60% of these patients are asymptomatic.4 Research suggests perioperative factors play a role in the development of incisional hernias, for example wound infection and the suture technique.5 Incisional hernia repairs are performed in 6 to 15% of cases because of strangulation or obstruction.6 Risk factors for strangulation are a narrow diameter of the hernia sac neck and increasing intraabdominal pressure caused by other abdominal pathology, including intraabdominal sepsis.7 Treatment of an incarcerated hernia consists of immediate surgical intervention, using the open approach when there is the suspicion of strangulation and the need of bowel resection.8 Subcutaneous emphysema, or crepitus on palpation, which is associated with necrotising fasciitis, is actually a late sign of this disease (developing during the third and last stage) along with skin necrosis with discoloration and skin anaesthesia.9 In this case it turned out to be a sign of ‘free’ air due to perforation.