From dentist to internist 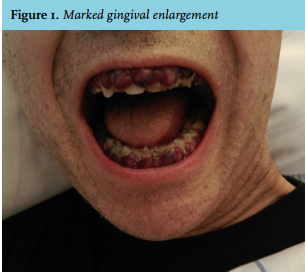 A 64-year-old man was referred by his dentist because of remarkably enlarged and vulnerable gums. His chief complaints were nausea, weight loss and haematemesis because of gum bleeding for the last 5 weeks. He has a past medical history of retroperitoneal fibrosis, hypothyroidism and a myelodysplastic syndrome type refractory cytopenia with multi-lineage dysplasia since 2013 for which he received no treatment. His only medication was levothyroxine 75 µg once daily. He does not smoke. Physical examination revealed a fever, marked gingival enlargement (figure 1), a 2 cm submandibular lymph node on his left side and several haematomas on both legs.