Pancytopenia in a young girl with skin lesions

A 14-year-old-girl presented with complaints of being easily fatigued and bleeding gums of two weeks’ duration. She had a history of seizures in childhood. Physical examination demonstrated papular lesions on the nose, and cheeks consistent with facial angiofibromas (figure 1) There were ash-leaf hypomelanotic macules on the limbs (figure 2). No oral or periungual fibromas were seen. Examination of the cardiovascular and respiratory system was unremarkable. Her blood investigations revealed a haemoglobin of 4.59 mmol/l, elevated leucocyte count 4.93 x 109/l with 78% abnormal cells and thrombocytopenia 1.6 x 109/l. Bone marrow showed immature cells having irregular nuclei with folding and invagination (figure 3). The immature cells were peroxidase positive. Magnetic resonance imaging of the brain revealed subependymal nodules in the lateral ventricle (figure 4).


WHAT IS THE HAEMATOLOGICAL CONDITION CAUSING PANCYTOPENIA AND WHAT IS THE SYNDROME IN THIS PATIENT? 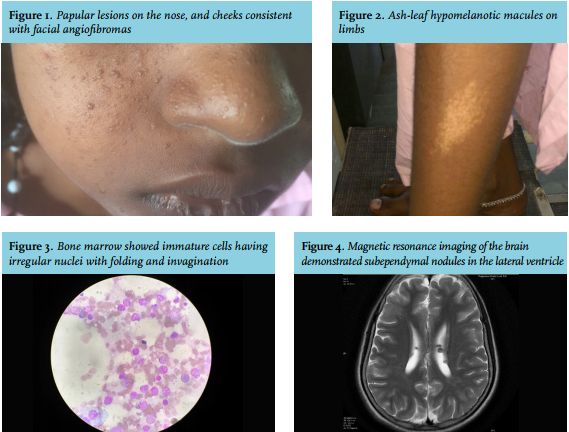