Study design and patients
In this single-blinded, retrospective cohort study, data were prospectively collected from patients who underwent SBCE from May 2011 until December 2012.
Exclusion criteria consisted of general contraindications for SBCE such as swallowing difficulties, known or suspected intestinal fistulas or stenosis and the presence of an implantable cardioverter defibrillator. Additional exclusion criteria were impaired intestinal motility, severe diverticulosis, pregnancy and age less than 18 years.

Bowel preparation and SBCE examination
Data on the two cohorts were collected from medical records. One cohort received a preparation with only PEG while the other cohort received PEG and simethicone prior to SBCE. Patients in the PEG group underwent SBCE before November 2012 and received standard bowel preparation consisting of a liquid diet 1 day before SBCE, 2 litres of PEG and a clear liquid diet in the evening before SBCE followed by an overnight fast. Patients in the PEG-S group, who underwent SBCE between March and December 2012, received simethicone in addition to standard bowel preparation with PEG. They ingested 2 ml of simethicone suspension containing a total amount of 82.4 mg of simethicone (Lefax, Bayer, Germany) with a small amount of tap water 15 minutes prior to SBCE. All patients who took iron supplements were asked to temporarily stop these seven days before SBCE.
SBCE was performed using the Pillcam SB (Given Imaging, Israel). All patients were allowed to drink clear liquids and eat a light meal 4 and 6 hours, respectively, after swallowing the capsule. Images were collected for a period of 8 hours until the battery ran out. Images were reviewed using RAPID 4.0 (MedTronic, United States).

Assessment of outcomes
Thirteen out of the total 64 videos were reviewed by two experienced investigators (D.D., S.B.) regarding evaluation of the quality of small bowel visualisation. Interobserver variability was assessed and after agreement was reached on any discrepancies, the other 51 videos were reviewed by only one investigator. In cases of disagreement, investigators discussed the video until consensus was reached. Investigators were blinded to which bowel preparation patients received prior to SBCE. All images of the videos were evaluated by the investigators.
To evaluate small bowel visualisation, the amount of intraluminal gas as well as faecal contamination limiting mucosal visibility was assessed for every video using a four-point grading scale: Grade 0: no intraluminal gas/ faecal contamination, Grade 1: a few gas bubbles/little faecal contamination, no limitations for interpretation of SBCE, Grade 2: presence of some intraluminal gas/ faecal contamination leading to moderate limitations for interpretation, Grade 3: presence of a substantial amount of intraluminal gas/faecal contamination leading to severe limitations for interpretation. Grade 0 and 1 were classified as not limiting for interpretation of SBCE whereas grade 2 and 3 were considered as limiting for the interpretation of SBCE. The quality of visualisation of the proximal and distal small bowel was assessed separately. The proximal part of the small bowel was defined as one hour of video after the first duodenal bulb image while the distal part of the small bowel began one hour before the first caecal image.
Small bowel transit time was defined as the time from the first image of the duodenal bulb until the first caecal image.
The diagnostic yield was classified as either ‘explanatory’ or ‘not explanatory’. If findings on images could explain the patient’s signs or symptoms, diagnostic yield was assessed as ‘explanatory’. Images were assessed as ‘not explanatory’ if they did not show any abnormalities. 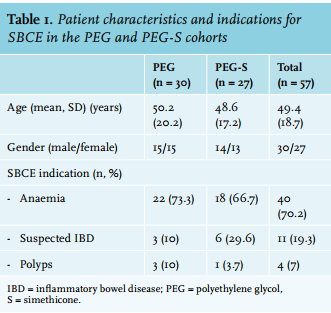 Patient characteristics
Data of 64 patients who underwent SBCE were analysed. Data of 7 patients, 4 in the PEG group and 3 in the PEG-S group, had to be excluded from analysis due to an empty battery of the Pillcam while the capsule was still in the small bowel. Therefore, a total of 57 patients were included in this study of which 30 patients in the PEG group (mean age 50 years, 50% men) and 27 in the PEG-S group (mean age 49 years, 52% men). There were no significant differences between the two groups regarding age (p = 0.75) and gender (p = 0.89). Indications for SBCE consisted of anaemia (70.2%), suspected inflammatory bowel disease (IBD) (19.3%), polyps (7.0%) or other (3.5%). Of the 4 patients with polyps as an indication for SBCE, 3 had a known polyposis syndrome and one patient was previously diagnosed with polyps. Patient characteristics are listed in table 1.
All patients ingested the capsule without difficulty and no serious adverse events were reported during the examination in the two groups. 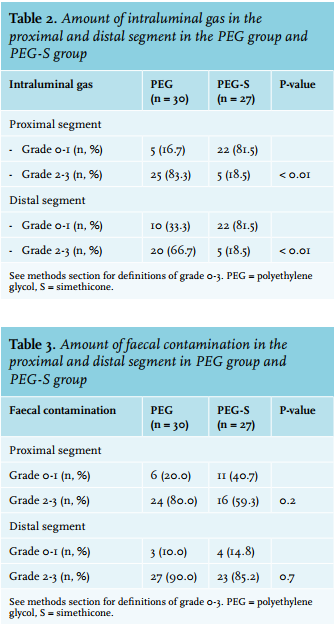