Since the extensive Legionella outbreak in Bovenkarspel in 1999, with 188 pneumonia cases and 23 deaths, the prevention and control of Legionella infections have become a national concern.1 This might have contributed to the current concern for underdiagnosing Legionella pneumonia and thereby the frequent use of ciprofloxacin in the empirical treatment of community acquired pneumonia (CAP).
Annually, about 110,000 cases of CAP are seen in the Netherlands, out of which 15% require hospitalisation.2 Publications state that a noteworthy percentage of 1% (ICU) to 6% (non-ICU) of these infections are caused by Legionella spp.3,4 This would account for 800 hospitalised patients with Legionella pneumonia per year. However, this number contrasts with the 300-400 Legionella cases which are reported to the National Institute for Public Health each year.5 This is in accordance with a recent Dutch multicentre study of 2283 patients admitted for CAP, which showed an incidence of pneumonia caused by Legionella spp. of less than 1%.4 Hence, the incidence of Legionella is probably lower than previously assumed. In addition, the study by Postma et al. demonstrated that it is safe not to treat Legionella spp. empirically in patients admitted to non-ICU wards. As a consequence, the added value of empirical treatment of Legionella spp. in patients with CAP can be questioned. Unnecessary use of quinolones in the empirical treatment of CAP contributes to avoidable selection pressure on resistant Enterobacteriaceae as well as avoidable side effects directly, or via interaction with co-medication.
Ciprofloxacin in combination with a beta-lactam antibiotic is a frequently prescribed treatment regimen in patients with CAP admitted to our hospital. Therefore, we performed a retrospective cohort study to assess the appropriateness of ciprofloxacin combination therapy in these patients. From the pharmacy database, all patients treated with ciprofloxacin plus beta-lactam antibiotic combination therapy in the Leiden University Medical Centre between June 2015 and June 2016, were identified. From this population we included all patients who were diagnosed with CAP according to the patient medical record. We assessed whether ciprofloxacin was given in accordance with the 2011 CAP-guideline.6 We used CURB-65 scores, which are calculated by assigning 1 point per condition for confusion, urea ≥ 7.0 mmol/l, respiratory rate ≥ 30/minute, either a systolic blood pressure ≤ 90 mmHg or a diastolic blood pressure ≤ 60 mmHg, and age ≥ 65 years,7 as severity index and checked if Legionella testing had been done. To determine the actual need for ciprofloxacin therapy, we also investigated the incidence of the Legionella pneumonia in our hospital during the studied period.
As shown in table 1, 210 patients were included, out of which only 43% received treatment with ciprofloxacin according to the 2011 Dutch CAP guideline.6 While all studied patients received Legionella treatment, only in 139 (66%) tests were performed to detect this pathogen. During the studied period, the causal pathogen was microbiologically proven to be Legionella pneumophila in five of the 210 CAP cases. This number corresponds with the total number of five Legionella pneumophila cases in our hospital from June 2015 to June 2016, which means that all Legionella pneumophila cases were empirically treated with ciprofloxacin. The CURB-65 scores for these five cases were 0, 0, 1, 2 and 3.
In conclusion, we observed that in 57% of patients who received ciprofloxacin combination therapy for CAP, the prescription was not in accordance with the 2011 guideline for hospitalised CAP patients. In this subgroup of patients who were not treated according to the guideline, testing for Legionella spp. was performed in 66% of the cases. With an incidence of Legionella less than previously assumed and a more generous use of ciprofloxacin in CAP patients than the 2011 guideline instructs, we fully agree with the 2016 SWAB/NVALT guideline update.8 A more restrictive use of ciprofloxacin is warranted. Efforts to implement this new guideline and to adhere to restrictive use of quinolones in patients with CAP are urgently needed. Since Legionella cases, as described in our study, will be found with any CURB-65 score, we recommend to perform Legionella diagnostics in case of risk factors for Legionella pneumonia. In patients admitted to the ward, doctors should await the results of this testing without empirically start ciprofloxacin treatment. 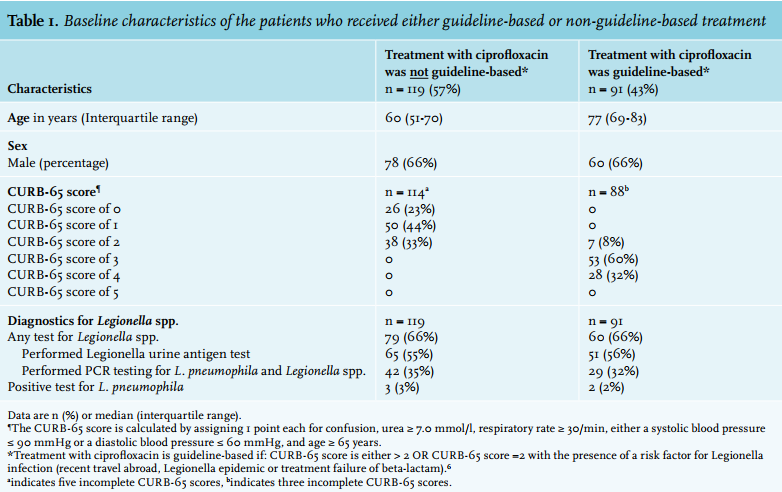