Answer to Photo Quiz: A blood smear on admission

Figure 2 (panel A) shows the peripheral blood smear on admission, revealing neutrophils with morphological changes as seen in inflammation: toxic granulation, cytoplasmic vacuolation and possible phagocytised cell debris or apoptotic nucleus parts. We continued the broad-spectrum antibiotics. Later on, Gram staining of the incubated blood cultures showed Gram positive diplococci (figure 2, panel B). Definitive culture results diagnosed our patient with a Streptococcus pneumoniae sepsis and multi-organ failure, with disseminated intravascular coagulation, rhabdomyolysis and anuric acute kidney injury. Her condition worsened shortly after ICU admission, and she was treated with mechanical ventilation, fluid resuscitation, noradrenaline, milrinone and continuous venovenous haemofiltration. We continued the penicillin for a total of ten days. She completely recovered.
Streptococcus pneumoniae infection is common in patients above the age of 65 years. The incidence of invasive pneumococcal disease in the Netherlands is around 15 per 100,000 inhabitants (2500 new infections per year). Approximately 300 patients die due to invasive pneumococcal disease, another 75-100 have severe morbidity.1
Neutrophils are one of the most important innate defence mechanisms against bacteria. They rapidly migrate to sites of colonisation and infection, where antimicrobial mechanisms (degranulation with release of antimicrobial proteins and release of neutrophil extracellular traps) and phagocytosis can then take place.2,3 Toxic granulation and cytoplasmic vacuolation are morphological changes that occur in the circumstances of bacterial infection, with other causes of inflammation or after administration of granulocyte colony stimulation factor. Predicting bacterial infections based on these morphological changes has been described in the past.4 The prognostic value of these findings is unclear. One study reports lower mortality in septic patients when neutrophils show higher phagocytic activity.5 However, excessive neutrophil migration to sites of inflammation can result in detrimental damage to surrounding tissues. To reduce this damage, the duration of neutrophil recruitment and toxic changes is regulated through anti-inflammatory and pro-resolving processes.3 Though not commonly used as a diagnostic tool, a peripheral blood smear can provide ‘circumstantial’ evidence of bacteraemia, before definitive proof by blood cultures is obtained: toxic granulation and cytoplasmic vacuolation in neutrophils, and in some cases even free circulating and phagocytised bacteria.6 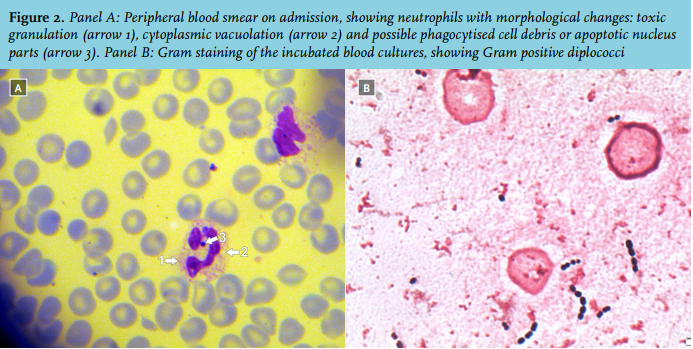