Answer to Photo Quiz: Granulating wound after a holiday in Peru 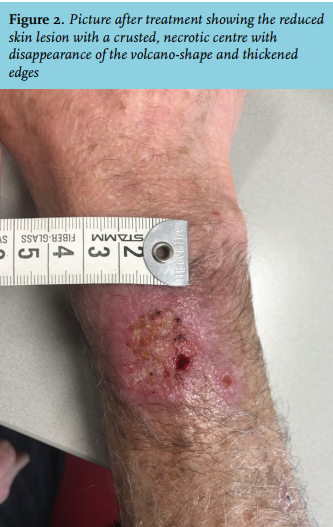 
Based on the typical ulcerating skin lesion with a background of his travel history, cutaneous leishmaniasis was suspected. A histological biopsy with a positive PCR for Leishmania (Viannia) braziliensis confirmed the diagnosis. The patient was treated with 6 doses of 3 mg/kg liposomal amphotericin B in a period of 4 weeks with a cumulative dose of 1400 mg, after which the skin lesions improved (figure 2).
Cutaneous leishmaniasis is an infection caused by various species of Leishmania protozoa and is endemic in more than 70 countries throughout Latin America, Asia, Middle-East and southern Europe. The global number of reported cases has increased in the past decades because of improved diagnosis and case notification, but also because of drug resistance and inadequate vector control as a result of urbanisation and deforestation.1Leishmania parasites are transmitted by sandflies belonging to either Phlebotomus spp (Asia, Europe, Middle-East and North-Africa) or Lutzomya spp (Central and South America). The ecological context of the transmission cycles between the Old World (i.e., Africa, Asia and Europe) and the New World (i.e., the Americas) is different. New World cutaneous leishmaniasis is mostly associated with forests, whereas an open semi-arid climate is the transmission environment for Old World cutaneous leishmaniasis. There are 17 different Leishmania species that can cause different clinical manifestations in humans. New World species of the L. (Viannia) subgenus, such as L. (Viannia)braziliensis and L. (Viannia)peruviana are associated with more severe and prolonged disease than the L (Leishmania) subgenus, such as L. (Leishmania) mexicana and L. (Leishmania) amazonenis.2 After a bite of an infected sandfly, acute cutaneous leishmaniasis usually presents as a small erythema that develops into a papule and then a nodule. Over a period of 2 weeks to 6 months this nodule will enlarge and ulcerate to produce a typical volcano-shaped ‘wet’ lesion with thickened edges. Ulcerated lesions are typical of infection by New World species, whereas nodular lesions are caused by the Old World species L. aethiopica and L. donovani. Sporotrichoid lymphatic spread, regional lymphadenopathy and satellite lesions such as in our case are common. Although cutaneous leishmaniasis is generally non-fatal and self-limiting, the risk of developing mucosal leishmaniasis should be considered when deciding on local or systemic therapy. Mucosal leishmaniasis can be life-threatening and disfiguring when ulcerating and extensive tissue destruction of nasal cartilage, larynx, trachea or oesophagus can lead to death by aspiration, respiratory compromise or secondary respiratory infections. L. braziliensis is a species with a high risk for mucosal disease. For cutaneous leishmaniasis, parenterally or intralesionally pentavalent antimony (Pentostam) is the first treatment of choice.3 However, because of the potential side effects of pancreatitis, cardiac toxicity and elevated liver enzymes, particularly in this older patient, we chose liposomal amphotericin B as second best alternative regimen.3,4