Granulating wound after a holiday in Peru 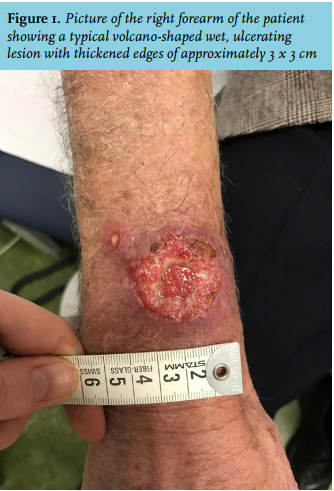 A 79-year-old man presented to our outpatient clinic because of a painful skin lesion on his right forearm. Four months after returning from a one-month trip in Peru he noticed a small crusted lesion on his forearm, which gradually increased into a painful ulcerative, granulating wound. On physical examination he did not appear ill. Body temperature was normal. A large, round, erythematous granulating ulcerative lesion of approximately 3 x 3 cm with raised edges was seen just proximal of his right wrist (figure 1). There was a nodular lymphangitis extending from the wound to the insertion of the deltoid muscle. Cubital and axillary lymphadenopathy were present. Laboratory analysis, including leucocyte count and C-reactive protein level, was unremarkable.


WHAT IS YOUR DIAGNOSIS ?