Answer to Photo Quiz: Spontaneous rupture of a splenic artery aneurysm in a male patient

The multislice computed tomography angiography revealed a splenic artery aneurysm (SAA) measuring 23 x 20 mm, 40 mm from the splenic hilum. A small trace of contrast extended caudally and medially from the aneurysm indicating actual bleeding.
The emergency operation was performed through a medial laparotomy. A large amount of blood in the free intra-abdominal cavity (at least 1000 ml) and a retroperitoneal haematoma which was lifting central and left retroperitoneum were found. The aneurysm was found at the bifurcation of the splenic artery. After controlling the haemorrhage, an aneurysmorrhaphy and splenectomy were carried out. The postoperative course was uneventful and the patient was discharged on the 12th day of hospitalisation (figure 2A and B).
True SAAs are rare with an incidence of 0.01-0.98% in large autopsy studies.1 They appear mainly in female patients with a female-to-male ratio of 4:1.2 The risk of rupture is 5% and the risk factors are pregnancy, portal hypertension, medial fibrodysplasia, splenomegaly, orthotopic liver transplantation, pancreatitis, vasculitis and degenerative atherosclerosis. None of these were found in the patient’s medical history. We present here a rare case of spontaneous rupture in a previously healthy male patient. Indications for treatment are symptoms, aneurysms measuring more than 20 mm, pregnancy and patients who have undergone previous major upper abdominal surgery.3 According to Van Rijn et al.2 the smallest spontaneously ruptured splenic aneurysm in their study was 23 mm.
Aydın et al. report an SAA measuring 20 mm4 and here a 23 mm SAA is described as well. This raises a question of whether the size of visceral artery aneurysms plays a role in the risk of rupture.
Most of the patients with SAAs are asymptomatic; it is an incidental finding on cross-sectional imaging.2 However, the first symptoms occurring can be symptoms of hypovolaemic shock. The case above describes a classic double rupture phenomenon after which catastrophic symptoms of shock appeared.
The main treatment option in elective cases is an endovascular procedure. In emergency settings with massive intraperitoneal haemorrhage, open surgery remains the main treatment option.2 In case of a distal artery aneurysm, both aneurysmectomy or aneurysmorrhaphy in combination with splenectomy are possible.
The high morbidity associated with SAA rupture compared with the significantly lower morbidity of elective treatment2 indicates that SAAs should be treated as diagnosed. 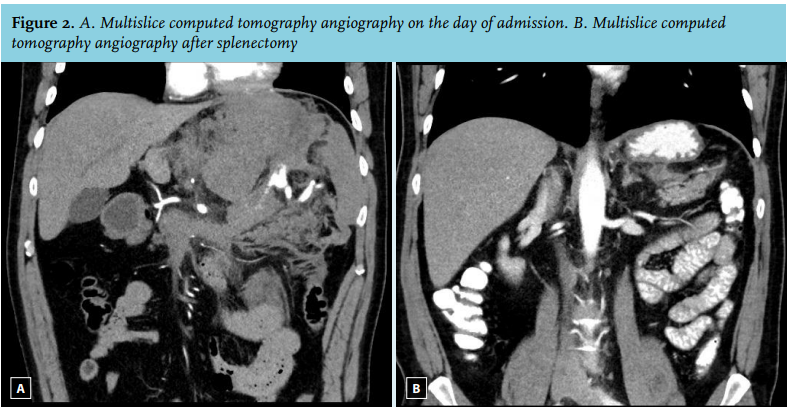