After kidney transplantation, there is an increased risk for development of urothelial cell carcinomas including graft tumours.1 We present a case of a male recipient with two consecutive kidney grafts in which a donor-derived urothelial cell carcinoma in the first graft and in the bladder was found harbouring a XX genotype, as detected by FISH, thus indicating that the tumour originated from the maternal donor.
Apart from a report identifying Y-chromosome status in female post-transplant non-small cell lung carcinoma patients2 and two cases of sex chromosome discrepancy in kidney transplantation patients with urothelial carcinoma,3,4 to our knowledge, there are no other reports after organ re-transplantation about late-onset tumours where the origin of the tumours from donor cells was proven. 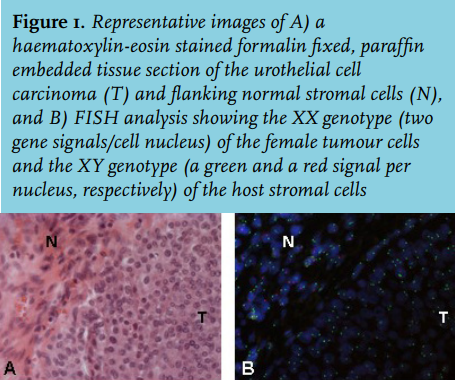 This case shows a patient who received a living related donor kidney from his mother and subsequently developed urothelial cell carcinoma in that graft kidney and in the bladder, after he had already undergone a second transplantation because of graft failure. We provided evidence, using XY-specific FISH analysis of the malignant cells, that both the original tumour and the recurrent bladder tumours originated from cells from the maternal graft.
Current literature does not recommend standard imaging6 or transplantectomy without a clinical indication after graft failure,7 which might have improved the prognosis of this patient. The decision regarding transplantectomy before a re-transplantation is complicated. Careful consideration of the advantages and disadvantages for the individual patient is needed. Our patient was re-transplanted pre-emptively. It was decided not to perform transplantectomy, because this would have led to a period of dialysis and possibly more operative risks and also possible HLA immunisation against the new donor.
Screening for tumours in a failed graft and transplantectomy of a first graft before re-transplantation remains a difficult issue. In our clinic, CT scanning of the abdomen without IV contrast in the preparation before re-transplantation is a standard procedure. The CT scan without IV contrast preceding re-transplantation showed no abnormalities of the first kidney graft. IV contrast is relatively contraindicated for many patients with a kidney graft. The relevance of regular screening with ultrasound and/or PET-CT in early detection of renal graft tumours is also unclear. In our centre, we generally remove failed kidney grafts when patients are dependent on dialysis and have oliguria. In other centres, the failed graft remains in situ. Hence, with regard to transplantectomy of failed kidney grafts, there is also no consensus.
In conclusion, we have proven the relevance of interphase cytogenetics to identify the origin of a tumour in organ transplant recipients, especially after re-transplantation with two donor organs in situ. At this time, the value of screening for graft tumours is unproven.