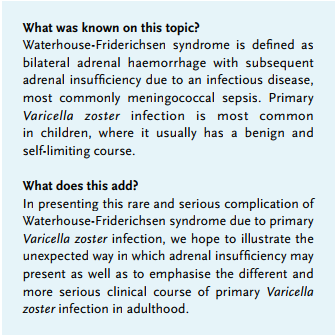 A 53-year-old man of African Caribbean descent, with a previous medical history of hypertension and paroxysmal atrial fibrillation not treated with anticoagulants, presented to the emergency department with a sharp umbilical pain. The pain was accompanied by the feeling of general weakness. His temperature was normal at 36.7 °C. His blood pressure was 170/90 mmHg with a pulse rate of 58/minute. His abdomen was tender with right-sided pain upon palpation. No skin abnormalities were noted at first presentation. The complete blood count including thrombocytes was normal, except for a mild lymphopenia of 0.66 x 109/l. The prothrombin time was 11.1 seconds, while the activated partial thromboplastin time was not measured at presentation. Kidney function was within the normal range (an estimated glomerular filtration rate (eGFR) of 106 ml/min/1.73m2 ) and the C-reactive protein was 12 mg/l. There was a slight hyponatraemia of 132 mmol/l and hyperkalaemia of 5.0 mmol/l.
A computed tomography (CT) scan of the abdomen with intravenous contrast demonstrated diffuse swelling and strong enhancement of both the adrenal glands with inflammatory changes in the surrounding retroperitoneal fat (figures 1a and 1b).
Due to persistent pain and a new, rapidly progressive, non-itching and vesicular generalised rash an additional CT scan was performed the next day, which demonstrated hyperdense round masses strongly suggestive of bilateral adrenal haemorrhage (figure 1c). Polymerase chain reaction (PCR) on fluid from a skin lesion was positive for VZV, serological testing showed a positive IgG and weak positive IgM for VZV and PCR on plasma was positive for VZV genome after nucleic acid amplification testing, which confirmed the diagnosis of primary VZV. The patient was admitted under the diagnosis of primary VZV infection complicated by bilateral adrenal haemorrhage, for which he was treated with intravenous aciclovir (10 mg/kg thrice daily).
During admission the patient’s blood pressure fell to 76/50 mmHg and a random cortisol measurement was significantly decreased at 41 nmol/l (150-700 nmol/l). The diagnosis of adrenal insufficiency was made after which substitution of glucocorticoid and mineralocorticoid steroids was initiated. The substitution consisted of a bolus of 100 mg hydrocortisone intravenously followed by 50 mg thrice daily and fludrocortisone 100 µg orally. He developed marked acute renal failure with an eGFR nadir of 16 ml/min/1.73 m2 , which resolved over the next few days after aggressive fluid resuscitation. The sodium and potassium normalised to 136 mmol/l and 4.5 mmol/l respectively. The vesicular skin lesions resolved completely after treatment. Standard adrenocorticotropic hormone (ACTH) stimulation testing with 250 µg synthetic ACTH 5 months after the initial diagnosis with a baseline cortisol of 0.036 µmol/l resulted in cortisol levels of 0.040 µmol/l 30 minutes after stimulation and 0.043 µmol/l 60 minutes after stimulation, which in accordance with a cut-off value of > 0.43 µmol/l confirmed permanent hypocortisolism. Renin/aldosterone testing was not performed. The patient’s maintenance therapy consisted of hydrocortisone orally in a standard dose of 10 mg in the morning, followed by 5 mg in the afternoon and evening as well as fludrocortisone 100 µg orally.

VZV (or human herpesvirus type 3) infection is a common viral infection. Primary infection results in a generalised maculovesicular rash (varicella or chickenpox); endogenous reactivation of latent VZV causes herpes zoster (shingles). In the Netherlands, primary VZV infection most commonly occurs in childhood with a benign and self-limiting course. However, the adult disease course can be more complex and infected adults have a six-fold higher hospitalisation rate, usually due to pneumonia.2 National surveillance data estimate that 98-100% of the Dutch adult general population3 test positive for VZV IgG antibodies.
In tropical climates approximately 50% of the adult population is estimated to be seronegative for VZV IgG. The adult immigrant population therefore has a greater risk of contracting the disease during adulthood with an increased risk of severe morbidity. In a cross-sectional survey of the Amsterdam population, ethnic origin and first-generation immigrants were positive predictors for IgG seronegativity to VZV, with 91% of adults of Surinamese and Caribbean descent being seropositive for VZV IgG.4
Awareness of these substantial differences in immunity is important in recognising and managing primary VZV in adults, as our case clearly demonstrates.
Bilateral adrenal haemorrhage with subsequent adrenal insufficiency occurring in the setting of an infectious disease is known as the Waterhouse-Friderichsen syndrome. Waterhouse-Friderichsen syndrome is classically associated with meningococcal disease but has also been described in the clinical course of various other infectious diseases, and if unrecognised and left untreated often has a fatal outcome.5,6 Patients may present with abdominal pain and shock which is only preceded by hypotension in approximately half of all patients,7 which may explain the fact that our patient presented with hypertension rather than the expected distributive shock that many clinicians associate with hypoadrenalism. The exact pathogenic mechanism responsible for adrenal haemorrhage in Waterhouse-Friderichsen syndrome is still unknown, but may be related to the adrenal gland’s inherent vulnerability to haemorrhage due to its unique blood supply, where an arterial subcapsular plexus drains on relatively few venules.
Other case reports have described haemorrhagic transformation after thrombosis as a cause of bilateral adrenal bleeding in the setting of an antiphospholipid syndrome,8 while spontaneous haemorrhage has been reported as well.9 In a case series describing 65 cases of fatal bacterial infections in which bilateral adrenal gland haemorrhage occurred in 60% of cases, 36% of cases showed haemorrhages in other internal organs as well, possibly representing the presence of disseminated intravascular coagulation.10 Based on the subsequent imaging available in our case, where haemorrhage was preceded by swelling and enhancement of both adrenals, we hypothesised that haemorrhagic transformation of the adrenal glands may have been preceded by venous backflow into this vulnerable vascular network due to stress-mediated venoconstriction and/or thrombosis.11

Despite its rarity, this unique case highlights the importance of awareness of possible complications in adult primary VZV infection. It also illustrates the treacherous way in which adrenal insufficiency may present in the course of an infectious disease. This is especially important in an increasingly global setting where Varicella immunity among adults varies greatly.

The authors have nothing to disclose.