Prevalence of iron deficiency in a Dutch geriatric migrant population

In an older population, anaemia is a frequent finding. The prevalence of anaemia rises with age and is about 25% in persons aged ≥ 85 years.1 This is of clinical relevance since, corrected for comorbidity, in elderly persons anaemia is associated with poor physical performance, hospital admissions, a diminished quality of life and mortality.2,3
In patients > 65 years with anaemia, 36% is caused by iron deficiency.4 Iron uptake can be insufficient as a consequence of dietary deficiency or an uptake problem such as coeliac disease. Another more frequent cause in the Western world is salient blood loss. In elderly patients, the blood loss mostly occurs within the gastrointestinal tract.5 Causes are often non-malignant such as an erosive lesion or angiodysplasia of the colon. Nevertheless, 2-15% of elderly patients with IDA are diagnosed with colorectal cancer, and 2-6% are diagnosed with a malignancy of the upper gastrointestinal tract.6 The diagnosis IDA affects both the morbidity and mortality of patients, while it might also have consequences for the diagnostic procedures. Since IDA is often caused by blood loss in the gastrointestinal tract, invasive diagnostic procedures such as gastroscopy or colonoscopy are regularly performed. Although it is important to exclude the possibility of a malignancy, the potential risks of such procedures, especially in the geriatric population, need to be taken into account.5
In the Netherlands, a growing part of the elderly population consists of first-generation migrants originating from Turkey and Morocco. Expectations are that the population with a Turkish and Moroccan background older than 65 years will grow from 32,345 in 2010 to 91,947 in 2030.7,8 A study by the Netherlands Institute of Social Research showed that migrants from Morocco and Turkey aged > 65 years report more chronic diseases compared with the Dutch elderly, including diabetes mellitus, obesity, chronic obstructive pulmonary disease and cardiovascular diseases.7 Similarly to these chronic diseases, IDA might also have a higher prevalence in this population.
If there is a pre-existing higher prevalence of low ferritin levels and IDA in the Turkish and Moroccan migrant population, it is possible that the current diagnostic pathway is not the most favourable for this patient group. For the clinician, knowing that the migrant geriatric population on average has a lower ferritin level than the Dutch elderly could influence the decision to perform invasive diagnostic procedures. As it is not yet known to what extent low ferritin and IDA occur in the Turkish and Moroccan migrant population, we assessed this in a cohort of geriatric outpatients.

Study population
Cases were defined as Turkish and Moroccan new referrals visiting the outpatient geriatric clinic of a Dutch teaching hospital in Amsterdam. The total study population was referred for combinations of cognitive and/or functional decline. All consecutive patients were screened for eligibility if they visited the outpatient clinic for the first time in the period from 01-01-2012 until 31-12-2015. Patients were excluded if they were < 65 years. The control group was matched 1:1 for visiting the geriatric outpatient clinic on the same or consecutive date of first visit as the study population. The control group was not age- or gender-matched. The controls were defined as new referrals of ≥ 65 years who were born in the Netherlands. This study was performed according to the ethical principles of the Declaration of Helsinki. The Medical Ethics Committee of the MC Slotervaart in Amsterdam, the Netherlands, waived the necessity of informed consent because of the observational design.

Design
This study was a retrospective case-control study. Socio-demographic, medication and laboratory data were collected from patient files. All included patients had visited the outpatient clinic and were subjected to a complete comprehensive geriatric assessment. The consultation with the migrant population was done in the presence of a professional interpreter.

Statistical analysis
Descriptive statistics were used for baseline characteristics of the cohort. For comparisons between participant groups, a chi-square test was used for nominal and ordinal variables. To establish whether continuous variables were normally distributed, a histogram was created. If the variates were not normally distributed, they were transformed with a log transformation. A Student’s t-test was used for continuous variables with a normal distribution or transformed data, and a Mann-Whitney test was used for the analysis of estimated glomerular filtration rate. A p-value < 0.05 was considered statistically significant.
Subsequently, multivariate logistic regression was used to adjust for potential confounders. Covariates that changed point estimate more than 10% were added to the final model. The following covariates were considered for potential confounding: CCI, BMI, vitamin B12, folic acid, use of anticoagulants (platelet aggregation inhibitors and vitamin K antagonist), use of iron supplementation and use of NSAIDs. All analysis was performed using SPSS version 22 (IBM, Chicago, IL). 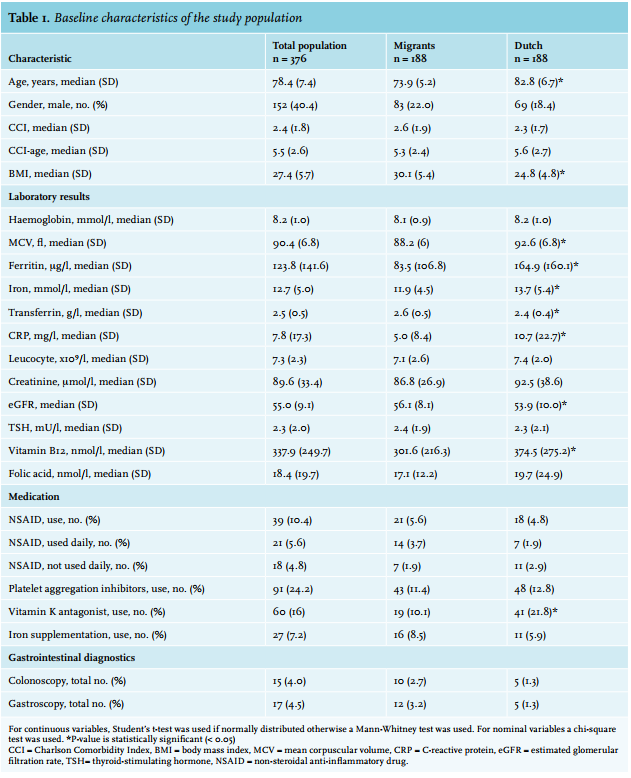 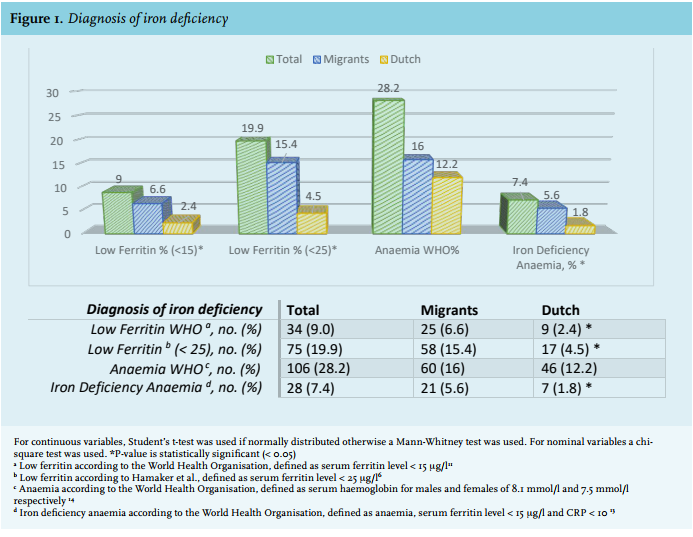 Gastrointestinal diagnostics studies
In the migrant population 14% underwent endoscopic procedures compared with 5% of the Dutch population. Because of the small absolute number, no statistical analyses were performed. The data are shown in table 3.

This study shows that the mean serum ferritin level in the geriatric migrant population was significantly lower compared with the Dutch geriatric population. Consequently, the patients in the migrant population were significantly more often diagnosed with IDA. The multivariate analyses showed that the migrant population had an increased risk of developing iron deficiency anaemia with an OR of 2.9.
To our knowledge this is the first study addressing the prevalence of IDA in migrant populations. As such, the potential underlying cause of the significantly lower mean serum ferritin levels and the higher prevalence of IDA in the migrant population has not yet been studied. Looking at the known mechanisms behind iron deficiency and IDA, different mechanisms for this difference can be hypothesised. In the Western geriatric population, IDA is mainly caused by gastrointestinal bleeding.15 It might be that the migrant population has more gastrointestinal bleeding compared with the Dutch population. This could possibly be caused by a higher prevalence of, for example, Helicobacter pylori infections.16 On the other hand, our limited data on gastroscopy and colonoscopy outcomes do not suggest that the migrant population has more gastrointestinal pathology. Besides bleeding, other known mechanisms for developing iron deficiency (anaemia) are intake and uptake problems. Iron deficiency is known to be the most common and widespread nutritional disorder in de world.13 The level of iron intake has been shown to differ between women with different ethnic backgrounds living in the Netherlands. The recommended dietary allowance for people > 65 years is 9.0 mg for man and 8.0 mg for women. Women with a Moroccan background had the lowest iron intake (7.2 mg a day), Dutch women had an average intake of 10.3 mg a day, while women with a Turkish background had a daily iron intake of 8.8 mg.17 This might be an explanation for the higher prevalence of iron deficiency anaemia.
Iron absorption can vary from 1% to 40%, depending on the mix of enhancers and inhibitors in the meal.13,18 A survey in Denmark of 80-year-old healthy persons showed a positive correlation between dietary iron intake and serum ferritin.18 Noteworthy was the negative correlation between serum ferritin and the consumption of tea.19

Limitations
A noteworthy result is the difference in age of the populations; this study showed that the migrant population was nine years younger than the Dutch population. Although this difference is considerable and could be a limitation of the study, we were able to correct for this in the multivariate analysis. Also of note, the CCI, a measurement for the degree of comorbidity, was not significantly different. This suggests that – despite the nine years difference in age – the burden of comorbidity between the populations was equal.
Furthermore, ferritin is highly specific for iron deficiency; however sensitivity is low, and a normal ferritin level thus does not necessarily preclude that iron stores are low.6 Interpretation of ferritin in older adults is complicated due to the serum ferritin level increasing with age and concomitant chronic disorders.10 As ferritin and CRP are both acute phase proteins, they are associated. The mean CRP level was significantly different between the two groups in this study. This could influence the mean ferritin levels. However, to our knowledge, there is no direct evidence suggesting that a difference of 5 mg/l in the CRP concentration significantly affects ferritin levels, especially if they are both within the normal range.
Another limitation is that the exact reason for referral of the study population remains broad, possibly causing referral bias. However, the overall impression at the outpatient clinic is that the migrants are more often referred for cognitive problems, and the Dutch population is more often referred for somatic problems. As CCI was comparable and was corrected for, we assume that underlying differences in somatic disorders did not play a role in the association.
With regard to potential explanative analyses, more information regarding the diet of the study population, for example the Mini Nutritional Assessment (MNA), or iron intake would be interesting. Further studies are needed to evaluate the iron intake of the migrant population. Lastly, we had relatively limited information about the use of over-the-counter medication, especially NSAIDs. It is possible that these results are an underestimation because NSAIDs are available without prescription in the Netherlands. In the geriatric population in the Netherlands 7% use NSAIDs that are purchased over the counter.20 The use of NSAIDs might be more frequent in the migrant population, although this has not been confirmed in the literature. This could cause an underestimation of the influence of the use of NSAIDs.

In the Netherlands, the prevalence of a low serum ferritin and iron deficiency anaemia appears to be more frequent in the geriatric migrant population, first-generation Turks and Moroccans, compared with the geriatric native Dutch population. The cause of this difference is not yet known. Potentially the difference in iron intake or uptake from nutrition between the populations may be underlying or it might be because of more gastrointestinal pathology in the migrant population, although our study outcomes do not point this way. For the clinician, knowing that the migrant geriatric population on average has a lower ferritin level than the Dutch elderly could influence the decision to perform invasive diagnostic procedures. Further research is needed to evaluate potential underlying pathways, including studies regarding the gastrointestinal pathology and the dietary specifications in the elderly migrant population.

These data were published at the International Congress of the European Union Geriatric Medicine Society, in Lisbon Portugal, from 5-7 October 2016.

There was no funding for this study. There are no conflicts of interest conducting this study.