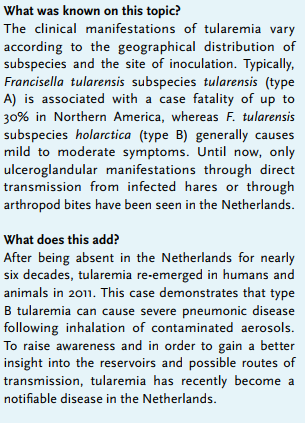 Francisella tularensis is a Gram-negative intracellular coccobacillus causing tularemia, a bacterial zoonotic disease occurring throughout the northern hemisphere. It has been classified as a potential bioterrorism agent due to its highly infectious and virulent properties. Typically, F. tularensis subspecies tularensis (type A) strains are found in North America and can cause severe systemic disease. By contrast, F. tularensis subspecies holartica (type B), which is found throughout the northern hemisphere including in Europe, is associated with mild clinical manifestations.1 In the Netherlands, tularemia re-emerged in 2011.2-4 We report the first case of severe pneumonia caused by F. tularensis subspecies holartica (type B) in an immunocompetent patient in the Netherlands.

A 54-year-old previously healthy gardener was hospitalised after 1 week of progressive influenza-like symptoms including myalgia, fever and a non-productive cough. Physical examination revealed a pulse rate of 90/min, blood pressure of 130/80 mmHg, temperature of 39 °C and oxygen saturation of 88% while breathing ambient air. Breath sounds over the right lung were diminished. Skin and lymph node evaluation produced no abnormal findings. A chest X-ray showed consolidation of the right lower lobe, pleural effusion and a prominent hilus on the right side. Intravenous antibiotic therapy for community acquired pneumonia with penicillin and ciprofloxacin was started. Sputum PCR was negative for Legionella pneumophila, Chlamydia pneumoniae and Mycoplasma pneumoniae; empirical ciprofloxacin treatment was subsequently stopped. Routine blood and sputum cultures failed to detect a bacterial pathogen. After a few days, the patient’s dyspnoea worsened due to increasing pleural effusion. A computed tomography (CT) scan of the chest showed expansion of the infiltrate, pleural effusion and hilar and mediastinal lymphadenopathy with central necrosis (figure 1). Pleural fluid was obtained and the Gram stain revealed no bacteria. After 4 days, Gram-negative coccobacilli were cultured on chocolate agar from the pleural fluid, which the Maldi-ToF MS identified as F. tularensis. Subspecies-specific PCR of the cultured strain confirmed subspecies holarctica (type B). Antibiotics were switched to gentamicin and ciprofloxacin. A chest drain was inserted for drainage and administration of intrapleural fibrinolytics until culture results were negative. Ciprofloxacin monotherapy was continued for 8 weeks until the patient fully recovered. Assessment of potential exposures to tularemia revealed that the patient had been mowing grass in a greenhouse 3 days before the onset of symptoms. F. tularensis could not be isolated from environmental cultures obtained from the greenhouse. 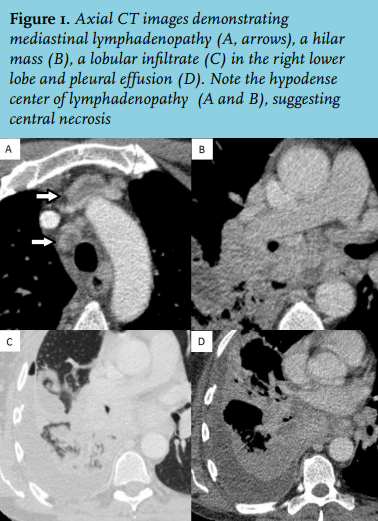 We report the first case in the Netherlands of pneumonic tularemia caused by F. tularensis subspecies holarctica in an immunocompetent patient after lawn-mowing. This case report illustrates that F. tularensis subspecies holartica (type B) infection, typically associated with low virulence, can cause severe pneumonia with empyema and necrotising lymphadenitis, and may pose a rare occupational hazard in immunocompetent adults following inhalation of contaminated aerosols. Previous studies report pneumonic tularemia caused by type B F. tularensis mainly in immunocompromised patients.1,5-8 One study from Spain describes a cavitary pneumonia due to tularemia in a person without any medical history.9 Although the subspecies is not mentioned in this case report, it is assumed to be a holartica strain due to the geographical location.
Tularemia can be transmitted via direct contact with infected animals (i.e. in hunters), arthropod bites, and by ingestion or inhalation. Small rodents, typically hares and rabbits, are considered the key animal reservoir of F. tularensis, yet mosquitoes, ticks, and contaminated water or soil are also regarded as a source of human infection. Different clinical manifestations of tularemia are recognised, depending on the portal of entry of bacteria.1,10,11 The ulceroglandular form is most common and combines an inoculation ulcer with regional lymphadenopathy. The oropharyngeal and oculoglandular forms occur after oral or conjunctival contamination, respectively. Pneumonic tularemia follows inhalation of contaminated aerosols. Finally, typhoidal tularemia is a severe systemic disease, irrespective of the portal of entry of bacteria, with high fever and neurological symptoms. The pneumonic and typhoidal forms of tularemia are rare in Europe.1 Tularemia is endemic in a few European countries including in Scandinavia, where it primarily causes the ulceroglandular form.12
Pneumonic tularemia has been nicknamed lawn mower’s disease and was studied during an outbreak in Martha’s Vineyard (Massachusetts, USA).13 This case-control study identified lawn mowing and brush cutting as the main risk factors for disease. This implies that F. tularensis can persist in the environment and can infect people after being mechanically aerosolised and inhaled. Another outbreak of airborne tularemia was described in Germany, where participants in a hare hunt became infected after rinsing disembowelled hares with a water hose.14 Clinicians should consider the possibility of tularemia in patients with fever or pneumonia after specific (sometimes occupational) activities that can aerosolise the organism from the environment. However, pneumonic tularemia does not only occur after inhalation; it can also follow the ulceroglandular or typhoidal form of disease. The presence of cutaneous manifestations can differentiate between potential routes of transmission.

The treatment of tularemia depends on the causative subspecies. In North America, for infections with F. tularensis subspecies tularensis, aminoglycosides are the antibiotics of choice, followed by doxycycline for less severe cases. In Europe, treatment is often with ciprofloxacin.1 In our patient, the clinical condition deteriorated after ciprofloxacin, which was included in the initial regimen, was stopped. After the diagnosis of pneumonic tularemia was made, ciprofloxacin was re-started and gentamicin was added, which is recommended in case of systemic disease.1 Because relapses are described, the duration of antibiotic treatment is often prolonged. In cases with purulent lymphadenitis or empyema there are reports of surgical intervention to reduce the chance of relapse.7

After being absent in the Netherlands for almost six decades, tularemia has re-emerged in humans and hares. Since 2011 there have been ten reports of autochthonous human infection, of which four in 2016.15-17 Until now, other reported cases had ulceroglandular manifestations either through direct transmission from handling infected hares or through arthropod bites, and possibly through contaminated water or soil. We suspect that our patient contracted tularemia through occupational exposure while lawn mowing in a contaminated area without a protective mask. From November 2016 onwards, clinicians and laboratories are obliged to report all tularemia patients to the local health authorities. This notification and consecutive source tracing will contribute to a better understanding of the burden of disease, the role of existing reservoirs in animals, arthropods and environment, and possible routes of transmission. This information is essential in order to develop effective public health interventions to prevent future infections. Given its rarity, clinical suspicion of tularemia in patients with pneumonia is likely to remain low. However, clinicians should be aware of tularemia, especially in case of specific exposures or failure of empiric antibiotic therapy.

We thank Corien Swaan (RIVM) for feedback on the final manuscript, and Frans Reubsaet and Maaike de Vries (RIVM) for identification of the isolate. Finally we thank the doctors and nurses in the LUMC who cared for this patient and the staff of the Public Health Services in Leiden for data collection.