Prevalence of drug-drug interactions in the era of HIV integrase inhibitors: a retrospective clinical study

Antiretroviral agents pose a high risk for drug-drug interactions (DDIs) with other antiretroviral and non-antiretroviral drugs.1 Protease inhibitors (PI) and non-nucleoside reverse transcriptase inhibitors (NNRTI) induce, inhibit, or are a substrate of cytochrome P450 enzymes. This is one of the major metabolic pathways potentially leading to an increased risk of toxicity or loss of efficacy of other antiretroviral and non-antiretroviral drugs.2,3 Several studies have documented the main risk factors which increase the potential for DDIs in antiretroviral-treated patients: age, increasing comorbidities, number of co-medications used by patients and the use of (boosted) protease inhibitors in the antiretroviral treatment (ART) regimen.4-9
Inhibitors of the HIV-1 integrase are considered one of the most important recent advances in HIV treatment. Raltegravir, elvitegravir and dolutegravir are the integrase inhibitors which were – in chronological order – approved by the US Food and Drug Administration and the European Medicines Agency for use in antiretroviral-naïve as well as treatment-experienced patients.10 They all have proven excellent results on virological efficacy, tolerability and safety,11 and since recently are recommended as the preferred antiretroviral agents for initial therapy in most treatment guidelines for non-development countries.12-14 Raltegravir is primarily metabolised through hepatic UGT1A1 glucuronidation and is not a substrate, inducer or inhibitor of the P450 cytochrome family.15 Elvitegravir is metabolised predominantly by cytochrome P450 enzymes (CYP3A4) with minor pathways via UGT1A1/3-glucuronidation.16 It needs a strong CYP3A4 inhibitor as pharmacokinetic enhancer for once-daily dosing. The booster used in the single tablet formulation with tenofovir/emtricitabine is cobicistat. Dolutegravir is predominantly metabolised by UGT1A1-mediated glucuronidation, but also by cytochrome P450 (CYP3A4) as minor pathway.17,18
The aim of this study was to investigate the prevalence of potential DDIs in daily clinical practice in a cohort of patients who started on different antiretroviral treatment regimens.

The study population comprised all patients starting ART in a single HIV clinic from January 2009 to April 2016. Retrospectively, data on ART (regimen choice, reasons for choice, starting date), CD4 T-cell nadir, virological treatment outcome and relevant comorbidities such as tuberculosis, active hepatitis B or C virus infection, were recorded from the medical files. If ART was later switched to another regimen, the investigation period was limited to the duration of the first prescribed ART regimen. All prescribed non-antiretroviral co-medications during this timeframe were recorded, including prescriptions started before the initiation of ART, which were continued during ART. Prescriptions by the general practitioner were also recorded in the files. The full medication list was not recorded during every patient visit, but at least once a year. The complete treatment of that period was subsequently screened for DDIs using the most recent version of the University of Liverpool HIV drug interaction database.19 This database presents charts to determine the risk of DDIs between antiretroviral drugs as well as between antiretroviral and non-antiretroviral drugs. It is regularly updated, including data for the newest antiretroviral agents. The severity of an interaction is signalled in codes: orange code for a potential interaction that might require dosage modification or close monitoring to minimise clinical consequences, a red code for contraindicated co-administration of drugs, potentially leading to serious adverse events or an impaired efficacy, and a green code in the absence of anticipated interaction. Only DDIs between antiretroviral and non-antiretroviral drugs were taken into account in the study. Approval of the local ethics committee was obtained.
Statistical analysis was performed with SPSS 24. Student’s t-test was used to determine differences in continuous variables between subgroups. The differences between other parameters were evaluated with Fisher’s exact test. A multivariate logistic regression analysis was performed to determine independent risk factors for DDIs.

A total of 145 patients were included. Median age was 42 years (interquartile range 35-51 years) and 75% were male (table 1). An NNRTI-based regimen was used in 41 patients (28%), 44 (30%) were on a protease inhibitor-based regimen and 61 (42%) on an integrase inhibitor-based regimen. Dolutegravir (n = 42) and elvitegravir (n = 18) were the most prescribed integrase inhibitors. Raltegravir was prescribed to only one patient. Tenofovir disoproxil fumarate/emtricitabine (TDF/ FTC) was the most frequent NRTI backbone (n = 100), followed by abacavir/lamivudine (ABC/3TC) (n = 36) and zidovudine/lamivudine (n = 7). Two patients were on an NRTI-sparing regimen. Efavirenz (n = 21) and rilpivirine (n = 17) were the most prescribed NNRTIs; atazanavir (n = 27) and darunavir (n = 16) being the most prescribed protease inhibitors. In case of protease inhibitor-based therapy, ritonavir was used as pharmacological booster in 86% of cases, cobicistat in 11% of cases; one patient received unboosted atazanavir-based treatment. Four patients were receiving tuberculosis treatment during the study period. There was a low prevalence of active hepatitis B virus infection (n = 1; 0.7%) and hepatitis C virus co-infection was noted in nine patients (6.2%). Undetectable HIV viral load (< 50 copies HIV RNA/ml plasma) was achieved in 96% of all antiretroviral-treated patients at the end of the study period.
A total of 113 patients (78%) took co-medication during the investigated period, with a median of 4 drugs (range 1-18) per patient. Polypharmacy, defined as using ≥ 5 co-medications simultaneously, was seen in 26% of the patients, significantly correlated with age (p = 0.024). There were no differences in baseline characteristics and number of co-medications when comparing patient groups according to ART regimen. Antimicrobials were the most prescribed non-antiretroviral drug class (63%), followed by cardiovascular drugs (31%), central nervous system drugs (29%), vitamins and supplements (27%) and gastrointestinal drugs (25%) (figure 1). The exact start date of non-antiretroviral drugs could not be retrieved in 10.7% of the prescriptions, while 23.6% of the non-antiretroviral prescriptions predated the start of ART.
Potential DDIs were seen in 63% (n = 71) of the patients with co-medications and in almost one-third (160/503; 32%) of all non-antiretroviral prescriptions. Prescriptions predating ART resulted in a relatively higher prevalence of potential DDI compared with ‘post-ART’ prescriptions, although not statistically significant (43.6% vs 35.0%, p = 0.129).
There were no significant differences in prevalence of potential DDIs when comparing the co-medication drug classes (figure 1). Concerning antimicrobial agents, potential DDIs most frequently involved sulfamethoxazole/ trimethoprim, pentamidine and atovaquone/proguanil. The most frequent potential DDI with cardiovascular drugs was noted with amlodipine, bisoprolol and pravastatin. Potential DDIs with escitalopram and trazodone appeared most frequently in the central nervous system drug class. Amlodipine and trazodone are mainly CYP3A4 metabolised and can be strongly influenced by CYP3A inducers (nevirapine, efavirenz) or by CYP3A inhibitors (ritonavir, cobicistat). Drugs which are partially metabolised by CYP3A4 but also by other CYP enzyme families as CYP2D6 (bisoprolol) or CYP2C19 (escitalopram) can experience similar, more moderate effects. Other pathways included OATP1B1 (pravastatin) through inhibition by cobicistat boosted elvitegravir or induction by efavirenz.
Contraindicated prescriptions were detected in 1% (n = 6) of all co-medication use, involving disproportionally more gastrointestinal drugs and protease inhibitors, compared with the other drug classes (figure 1). Most of these interactions involved CYP3A4: ritonavir boosted atazanavir and CYP3A4 inhibition leading towards potentially increased domperidone exposure (n = 2); boosted atazanavir and rifampicin, where CYP3A4 induction could result in decreased atazanavir levels (n = 1); boosted elvitegravir inhibiting CYP3A4 and increasing the drug levels of lercanidipine (n = 1) and co-administration of ritonavir boosted atazanavir with proton pump inhibitors, potentially decreasing the effective atazanavir concentration due to decreased intra-gastric solubility (n = 1).
Avoidance of potential DDIs was mentioned as one of the reasons for choosing a dolutegravir-containing ART regimen in four patients: two patients with tuberculosis treatment, one patient with chemotherapy, and one patient receiving both. For the other patients on integrase inhibitor-based treatment (57/61, 93%), there was no indication that potential DDIs played a role in the regimen choice.
To determine the impact of choice of the third agent on the prevalence of DDIs, two subgroups were compared: patients with co-medication and potential DDIs and/or contraindicated prescriptions (n = 71) and patients with co-medication without DDIs (n = 42). Antiretroviral-treated patients with co-medication and DDIs trended towards older age, took significantly more co-medications and had a significantly lower CD4 T-cell nadir at the start of ART compared with those without DDIs (table 1). There was no difference in antiviral treatment outcome between the two groups. The prevalence of DDIs was significantly different according to the choice of backbone: patients with co-medication and DDIs more often used TDF/FTC, those without DDIs more frequently ABC/3TC, compared with the first group. The effect of the ART backbone itself on the individual prevalence for DDI was however weak: in 22% and 19% of the patients treated with TDF/FTC or ABC/3TC, respectively, the NRTIs were involved in DDI. A more detailed analysis showed that DDIs were solely due to the backbone in only three patients: one patient on TDF/FTC + efavirenz and two patients on TDF/FTC + dolutegravir. Those patients were removed from the subsequent multivariate logistic regression analysis.
The logistic regression analysis showed that protease inhibitor-based ART was an independent risk factor for potential or contraindicated DDIs (odds ratio (OR) 2.57; 95% confidence interval (CI) 1.06-6.19) (figure 2). NNRTI-based ART was not associated with a higher risk (OR 0.77; 95% CI 0.32-1.84). A significantly lower risk for DDI was seen with dolutegravir-based treatment (OR 0.35; 95% CI 0.15-0.82), though not with elvitegravir-based ART (OR 2.51; 95% CI 0.66-9.58). Due to the small number of patients treated with raltegravir, the effect of this integrase inhibitor on the prevalence of DDIs could not be assessed. 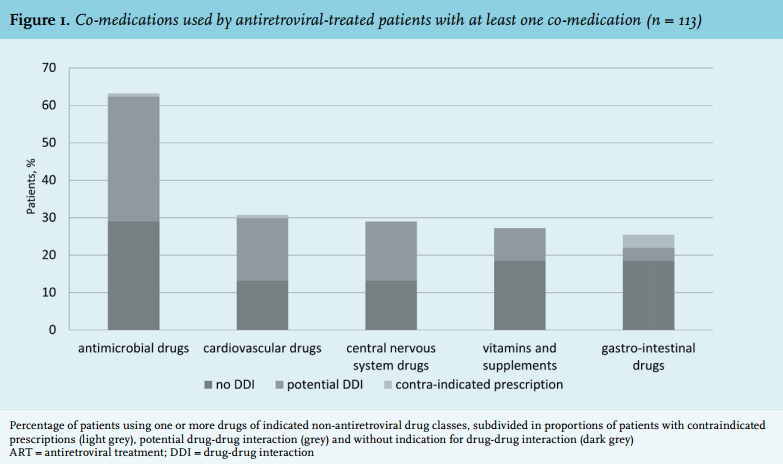 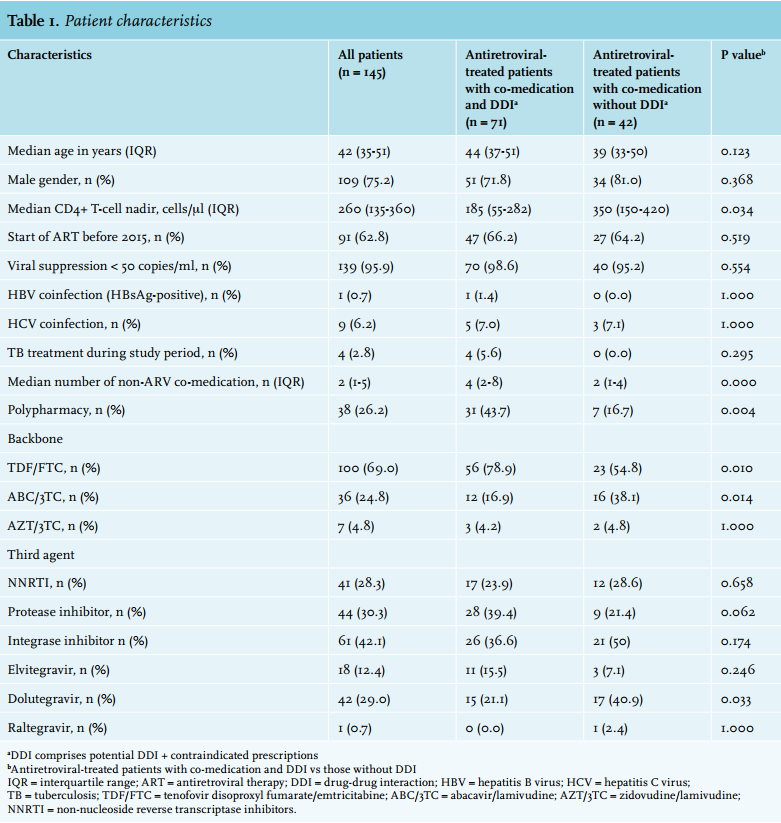 This retrospective study aimed at investigating the prevalence of potential DDIs or contraindicated prescriptions in a real-life patient cohort and the relation with the choice of ART regimen, in view of the recent surge of integrase inhibitor use. Of the patients, 78% were prescribed co-medication during the investigation timeframe, which is in line with previously reported data.6 The median CD4 cell count nadir at the start of ART was significantly lower in the patients with DDIs, suggesting a patient group with more late presenters or longer HIV infection history, potentially with more risk of comorbidities. There was, however, no difference in virological treatment outcome between the groups with and without DDIs. The prevalence of DDIs was lower in those patients using ABC/3TC, although the effect of the NRTI backbone itself is considered minimal: all NRTI backbones had an equally low contribution to the prevalence of DDIs. The frequent use of a single-tablet regimen containing ABC/3TC and dolutegravir could explain these findings. When considering the integrase inhibitors, dolutegravirbased treatment did show a significantly lower risk for DDI, which was not the case for elvitegravir. This correlates with the different routes of metabolisation of these drugs. The impact of raltegravir could not be assessed because of the low use in our clinic, partly due to drug registration regulations in Belgium. Previously published data showed the favourable characteristics of raltegravir concerning DDI prevalence in clinical practice.8
As non-antiretroviral prescriptions pre-dating the start of ART were also included in our analysis, we could expect a prescription bias concerning the choice of ART regimen. Remarkably, the smaller proportion of ‘pre-ART’ prescriptions (23.6% of the total non-antiretroviral prescriptions) resulted in a relatively higher potential for DDI, indicating there might have been more attention to potential DDIs when prescribing non-antiretroviral drugs in patients already on ART, compared with treatment-naïve patients starting ART. Avoidance of potential DDIs was mentioned in a limited number of patients starting dolutegravir, mainly related to oncological treatment or the concomitant use of anti-mycobacterial drugs.
It is important to mention the retrospective and single centre data collection as a limitation of this study as well as the lack of data on co-medication outcome and clinical toxicity. Furthermore, co-medication use might have been underreported or incompletely recorded leading to potential bias, especially the use of vitamins and mineral supplements and their potential interaction with integrase inhibitors.
In conclusion, our retrospective cohort study confirms the dissimilar risk of antiretroviral drugs for drug-drug interactions in clinical practice. Regarding the use of integrase inhibitors, a significantly lower risk was seen with dolutegravir-based treatment.

No funding or financial support was received for this work. The authors declare that they have no conflicts of interest in this work.