Polycystic ovary syndrome (PCOS) has been recognised as the most common endocrine disorder among women in reproductive age with an overall prevalence of 5-10%.1,2 This syndrome is characterised according to the Rotterdam criteria with the presence of at least two of three diagnostic criteria including a) lack of or reduced ovulation (with amenorrhoea or oligomenorrhoea), b) clinical symptoms and/or biochemical hyperandrogenism and c) the presence of polycystic ovaries on ultrasound examination. In recent years, it was found that the syndrome is frequently associated with the increased risk of cardiovascular disease, impaired glucose tolerance and risk of type 2 diabetes and lipid abnormalities.3-5
Vitamin D, a fat-soluble vitamin, can be produced in two ways: by intestinal absorption and endogenous synthesis from a precursor of 17-hydroxyl cholesterol on the skin with sufficient exposure to ultraviolet sunlight. Most references consider a serum 25(OH) vitamin D of < 20 ng/ml as vitamin D deficiency.6,7 Some studies have suggested that there is an association between serum levels of vitamin D and obesity and also other metabolic parameters in women with PCOS, including fasting glucose levels, fasting insulin, insulin resistance, high blood pressure, lipid disorders, fertility and other clinical and laboratory-related parameters associated with PCOS.6-13
Given the high prevalence of vitamin D deficiency in the population, especially in the population of women with PCOS, as well as evidence from recent studies indicating a link between vitamin D levels with some markers and laboratory parameters related to PCOS and also due to heterogeneous and controversial results from the studies,14-16 we aimed to assess the relationship between the serum level of 25(OH) vitamin D and metabolic parameters and levels of androgenic hormones in women with PCOS in a different demographic and geographical context.

Ethical approval
The study was approved by the ethics committee of Iran University of Medical Sciences. Written informed consent was obtained for all patients. The study was carried out according to the principles of the Declaration of Helsinki.

Study participants
This cross-sectional study was performed at the Endocrinology Institute of Firouzgar Hospital in Iran from May 2013 to December 2013. Included were 73 women aged 15 to 45 years with the diagnostic criteria of PCOS (Rotterdam Criteria 2003) who were selected from 120 patients referred to the PCOS clinic at the institute. The exclusion criteria were pregnancy, history of chronic disorders such as liver or kidney diseases, diabetes mellitus, hypothyroidism, congenital adrenal hypoplasia, Cushing’s syndrome, hyperprolactinaemia, androgen-secreting tumours, history of using vitamin D supplements within three months ago, or use of any medication influencing endocrine parameters.

Hirsutism score was classified based on the Freeman Galway Score. It represents the hair growth score in nine parts of the body. A score of more than 8 was defined as positive. Also, metabolic syndrome was diagnosed based on the Adult Treatment Panel III (ATP III) guidelines. All information obtained from history taking, physical examination, and also para-clinical measures was entered in a checklist. Written informed consent was obtained from all the patients in the study and they were assured that all information would remain confidential.

Data analysis
The results are presented as mean (± SD) for quantitative variables and were summarised by absolute frequencies and percentages for categorical variables. Normality of data was analysed using the Kolmogorov-Smirnoff test. Categorical variables were compared using the X2 test or Fisher’s exact test when more than 20% of cells with an expected count < 5 were observed. Continuous variables were compared using the t test. Whenever the data did not appear to have normal distribution or when the assumption of equal variances was violated across the group, the Mann-Whitney U test was used. Association between quantitative indices was determined using the Pearson’s or Spearman’s correlation tests. For the statistical analysis, the statistical software SPSS version 16.0 for windows (SPSS Inc., Chicago, IL) was used. Statistical analysis was considered to be statistically significant at p < 0.05. 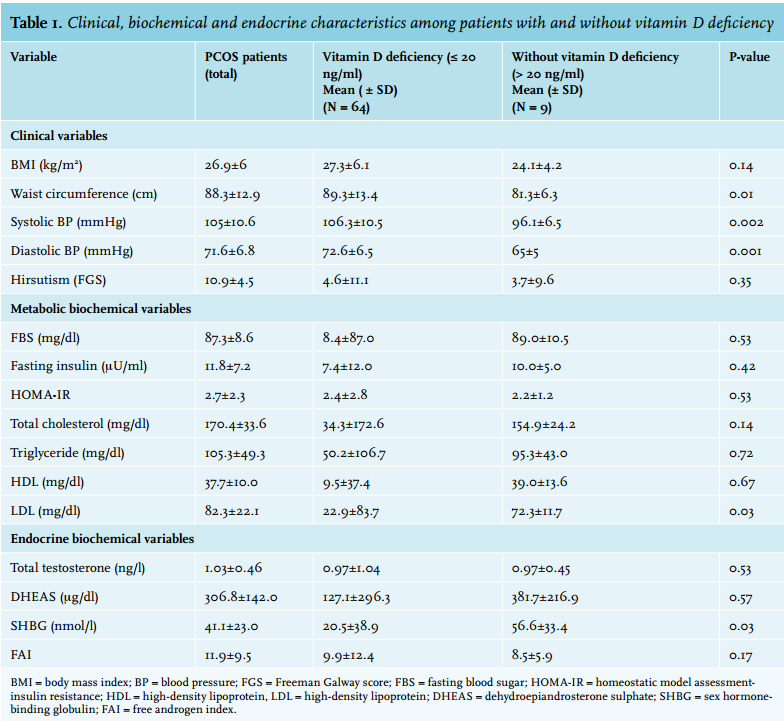 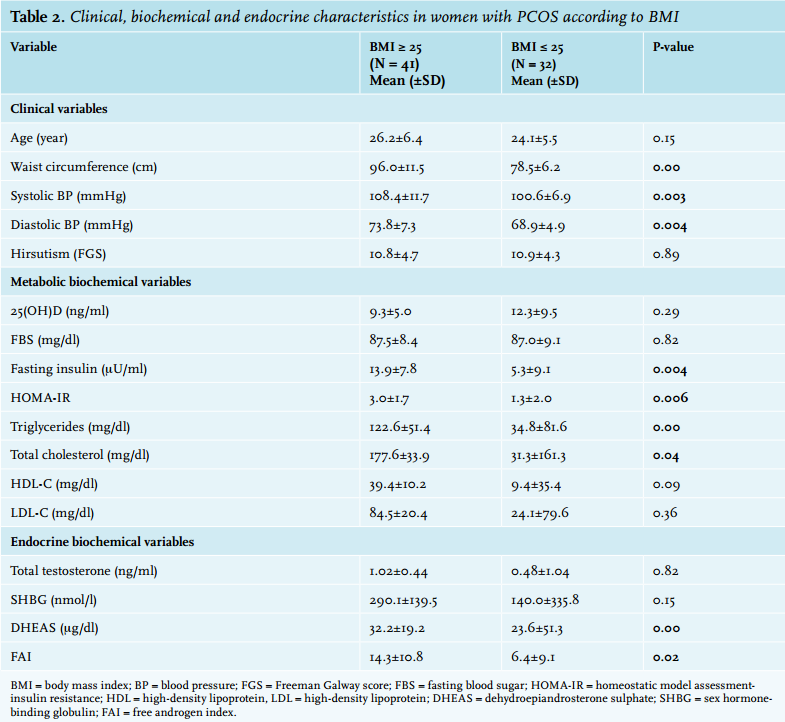 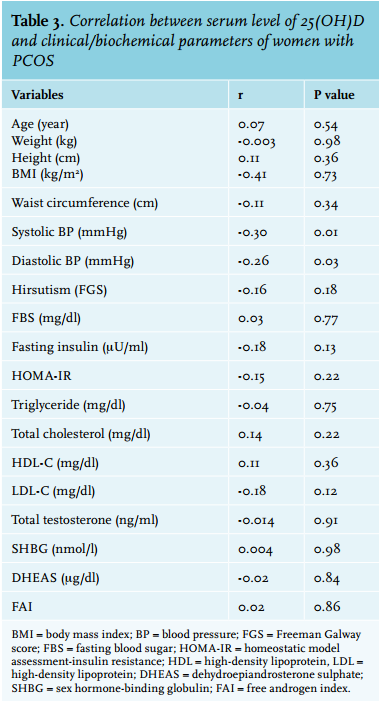 In recent years, several studies have been performed to examine the relationship between clinical features and laboratory findings (metabolic and endocrine) and serum levels of vitamin D status in patients with PCOS. Although there is no general agreement on the cut-off point for vitamin D to define deficiency or insufficiency, according to existing guidelines, serum 25(OH) vitamin D < 20 ng/ ml is considered as vitamin D deficiency, 20-29 ng/ml as insufficiency, and also the values < 10 ng/ml as severe deficiency.7-17 In this regard, in our study population, 68.5% had severe 25(OH) vitamin D deficiency, 78.7% had 25(OH) vitamin D deficiency, 9.6% had 25(OH) vitamin D insufficiency, and only 2.7% had a normal level of 25(OH) vitamin D.
In a study by Wehr et al. on Austrian PCOS women, 2.9% had severe 25(OH) vitamin D deficiency and in total 38.8% had 25(OH) vitamin D deficiency.12 In another study by Li et al. on English PCOS women, 25(OH) vitamin D deficiency was revealed in 72.0%.17 The wide difference observed in the studies might be due to the difference in climate, food and cultural habits (such as differences in the type of coverage) as well as in the methods used to measure serum levels of vitamin D and quality of laboratory kits.
Our study showed that the values of some clinical and biochemical parameters, including waist circumference, systolic and diastolic blood pressures and serum levels of LDL-C, were significantly higher in women with vitamin D deficiency (compared with women without deficiency), while the former group had lower levels of SHBG. Moreover, after dividing the study population into two groups of PCOS women with and without severe vitamin D deficiency, it was shown that the levels of fasting insulin and HOMA-IR, and blood pressure were significantly higher in women with severe vitamin D deficiency than in the other group before adjustment for BMI and waist circumference, but after adjusting for these variables, the difference only remained for systolic and diastolic blood pressures.
In most similar studies, a significant relationship was identified between low vitamin D levels and increased levels of glucose and fasting insulin and HOMA-IR in patients with PCOS.11-17 Although the exact mechanism underlying the association between low levels of vitamin D and insulin resistance is unknown, researchers in this field have proposed several possible mechanisms. First, vitamin D may have a stimulatory effect on the appearance of the insulin receptor and consecutively the increase in insulin response and glucose transport into cells. Second, vitamin D may regulate intracellular and extracellular calcium, which has a major role in intracellular processes related to insulin function in insulin responsive tissue such as skeletal muscle and adipose tissues. Also, vitamin D has a modulating effect on the immune system so hypovitaminosis D may increase the immune response that is associated with insulin resistance.18,19 Also, the possibility of malfunction in the β cells in women with PCOS has been raised as another possible mechanism.20-22 In our study, 12.3% of the PCOS patients suffered from metabolic syndrome; according to the mean age of our population (25.3 ± 6.1 years), this frequency can be interpreted homogeneously and is in line with previous studies in the general population. So, in the study on the adult population in Iran, the overall prevalence of metabolic syndrome was 42% in women as 9.3% in the age group 20 to 29 years, 24.3% in the age group 30 to 39 years, and 48.3% in the age group 40 to 49 years.23 Also, in the Wehr and Vural survey, the prevalence of metabolic syndrome in PCOS women aged 16 to 41 years and 18 to 22 years was 12.2% and 11.0%, respectively.12,24
In our study, similar to some previous studies, no significant association was found between serum levels of vitamin D and clinical and biochemical parameters of hyperandrogenism such as total testosterone, DHEAS, SHBG and the free androgen index.11,12,17
The study found that women with PCOS and BMI ≥ 25 kg/ m2 compared with women with a normal BMI had a higher mean waist circumference, triglycerides, total cholesterol, fasting insulin, HOMA-IR, blood pressure and also a lower mean SHBG, but contrary to some previous studies, no difference was found in mean serum vitamin D between the two subgroups of BMI, which might be due to the small sample size.8-10
Similar to some other studies on the general population and in women with PCOS, mean systolic and diastolic blood pressures in those with vitamin D deficiency was higher than those without deficiency with an adverse correlation between the level of vitamin D and blood pressures. Some laboratory investigations have shown that 1,25(OH)2 vitamin D can prevent the formation and increase of renin in the juxtaglomerular apparatus and subsequently cause adverse endocrine effects on the renin-angiotensin-aldosterone system. Also, this active metabolite can affect blood pressure by inhibiting the proliferation of smooth muscle cells of the vessel wall.25-28
In several studies, the effect of vitamin D supplementation in reducing blood pressure in the general population and also in specific groups has been examined leading controversial results.29-31 For instance, in a study by Larsen et al. on 112 hypertensive patients receiving cholecalciferol (3000 IU/day), it was indicated that following administration of these supplements for 20 weeks, despite the lack of a significant reduction in 24-hour blood pressure in those receiving supplements (compared with placebo), the subgroup of patients with an insufficient level of vitamin D had a better response to supplementation of vitamin D and also experienced a 3.4 mmHg decrease in blood pressure compared with the baseline value.29

One limitation of this study is the small sample size, which may have provided inadequate statistical power to detect some meaningful associations as statistically significant. Hence, the genuine validity of our findings will need to be confirmed in larger replication studies.
This study does not include a control group. Thus, we are not able to correlate the effects of low 25(OH) vitamin D levels with the metabolic profile of PCOS women specifically or with that of obese women in general. However, we performed subgroup analyses of lean and obese PCOS women with different 25(OH) vitamin D levels to address this limitation.

In our study, it was found that a high percentage of PCOS women were vitamin D deficient. The study also showed a significant difference in the values of some clinical and metabolic parameters such as waist circumference, systolic and diastolic blood pressure, LDL-C, fasting insulin, HOMA-IR and SHBG between PCOS women with and without vitamin D deficiency; however, no linear correlation was found between serum levels of vitamin D and baseline variables, except for systolic and diastolic blood pressures. Also, due to the need for assessing the causality relation and to determine the effect of vitamin D on these parameters, it is necessary to perform further randomised clinical trials in these patients.

This study was funded and supported by Iran University of Medical Sciences, Grant No. 90-01-122-21952. We also thank all the patients who contributed to this study.

We declare that the authors have no conflict of interest.