Besides the colour and swelling of the left leg, the skin also seemed different. It was more atrophic and there was probably an annulated skin lesion as a remnant of erythema migrans (figure 2). The patient did not recall any tick bites while she lived in the countryside. The biochemical results demonstrated no elevated inflammation parameters. ELISA and Western blot for Borrelia burgdorferi IgG were positive. The diagnosis was acrodermatitis chronica atrophicans (ACA), a chronic manifestation of Lyme disease. The patient was prescribed doxycycline for 28 days. The colour and the swelling of the leg disappeared, but the atrophy persisted. The pain was not a symptom of ACA and probably had a neurological origin. She was referred to a neurologist where spinal disc herniation was found to be an explanation for the pain.
It is known that five genospecies of B. burgdorferi sensu lato complex can be pathogenic to humans. The manifestations can be cutaneous, neurological or articular in nature. B. afzelii, one of these genospecies, is predominantly involved in skin manifestations, such as ACA.1,2B. afzelii causes human diseases in Europe and Asia and has not yet been identified in the United States.2,3 Following the primary infection, this chronic skin condition may take years before it appears. It is most common in women older than 40 years of age.4 The typical location is the extensor surfaces of the hands and feet. It usually begins as a unilateral lesion, but may become bilateral. In its early stage, also called the inflammation stage, ACA may present as a local or diffuse erythema with a bluish-red discoloration with associated swelling. At this stage, it may be misdiagnosed as venous insufficiency;4,5 the symptoms are aching pain, tingling and fatigue in the affected foot. The erythema may slowly increase over months and years, and oedema often resolves as atrophy develops. The skin loses its elasticity and therefore has a tissue-paperlike appearance. This atrophy is irreversible.4-6 Our patient had both swelling of the foot and atrophic skin, perhaps a symptom of transition from the early to the chronic stage. Biopsy of the skin, performed in case of non-conclusive clinical presentation or negative serology, shows an inflammation with lymphocytes and plasma cells and sometimes spirochetes. Seventy percent of the patients, such as our patient, do not remember having had any tick bites or erythema migrans, which leads to a delay in diagnosis.4 ACA can be treated with a four-week course of one of the following antibiotics: penicillin G, doxycycline, ceftriaxone or phenoxymethylpenicillin.7,8
This case demonstrates again that an accurate clinical examination and knowledge of the late complications of Lyme disease can prevent development of the irreversible atrophic stage of ACA and also avoids additional tests. 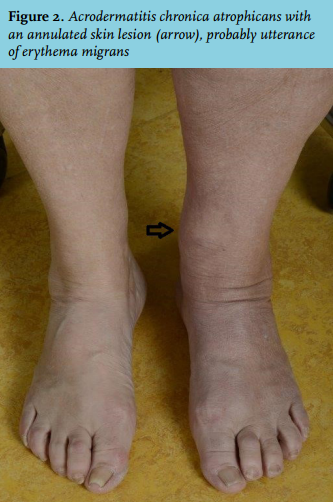